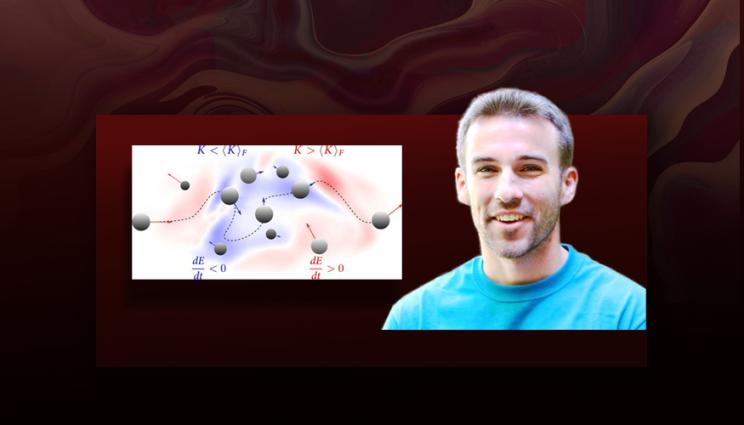 Kyle Pietrzyk, a graduate student at Stanford University who worked at LLNL as a 2020 High-Energy-Density Physics summer intern, is the lead author of work looking at why particles cluster in turbulent flows.

Understanding the mystery of why particles cluster in turbulent flows

Particle-laden flows are found in a variety of applications such as rain droplets in clouds, wind-driven sand dune sprays, fluidized bed reactors and soot formation during combustion processes. For more than 30 years, it has been well-established that particles do not move with the surrounding flow and tend to form clusters.

The work was selected as a featured article in the January issue of Physics of Fluids with Kyle Pietrzyk, a graduate student at Stanford University who worked at LLNL as a 2020 High-Energy-Density Physics summer intern, serving as lead author, with LLNL’s Design Physics Division staff members Jeremy Horwitz, Fady Najjar and Roger Minich serving as co-authors.

“In engineering contexts such as in internal combustion engines, these clusters can reduce system efficiency by reducing the rate of mixing and heat transfer, while in the atmospheric context, clustering allows smaller droplets to collide and form bigger droplets — which is necessary for the droplets to fall efficiently from cloud to ground,” Horwitz said. “Therefore the study of particle clustering remains an active area of research and this study provides further physical insight into how and why clusters form.”

Pietrzyk used a database for 3D particle-laden isotropic turbulence from Stanford University to conduct the research. The team examined particle clustering by studying particle-laden isotropic turbulence, which is a model problem that captures many of the physical processes present in a cloud. The team also observed particle accumulation in areas of low-flow kinetic energy over time.

Pietrzyk said in the first key finding, the researchers observe a consistent particle behavior in simulations of 3D particle-laden isotropic turbulence across a range of Stokes numbers — the ratio of particle response time to the fluid characteristic time scale.

This behavior was extracted from the statistical evidence provided in the publication.

The team also provides supporting evidence by analyzing a derived-particle kinetic-energy equation. The team shows that single snapshots of the turbulent flow may not be sufficient to observe the behavior especially at high Stokes numbers, but over time, the statistics suggest that the team’s proposed behavior is maintained.

The second finding is a stochastic model, such as the Fokker-Planck equation, for the particle kinetic energy probability density function. The team looked at colored noise in this model and fit the model to the simulation data with physically reasonable parameters. Overall, the work provides a perspective of particle clustering in turbulence from the lens of kinetic energy.

“We hope it will be useful for future works and inspire further investigations into preferential concentration from new perspectives,” Najjar said.

This research is a great benefit to LLNL since it is key to understanding how turbulence affects particle evolution and clustering in complex multiphase flows. This effort will provide important components for predictive computational tools to model detailed particle-turbulence mixing processes.

“Particle clustering is considered a basic research issue in applied research for star and galaxy formations, sediment flow and erosion in riverbeds, as well as in dust storms, which pose visibility and health risks and can damage vehicle engines,” Horwitz said.

Horwitz said it is worth stressing the benefit of the work from a communication standpoint.

“The internship was completed under unusual and stressful circumstances given the COVID pandemic,” Horwitz said. “The ability of Kyle and LLNL researchers to keep up regular communication, conduct rigorous research and ultimately publish the findings is a testament to Kyle’s resolve and is emblematic of the broad effort that everyone at the Lab has contributed during these difficult times. It’s one example of countless others of LLNL staff stepping up to meet programmatic objectives despite these trying times.”