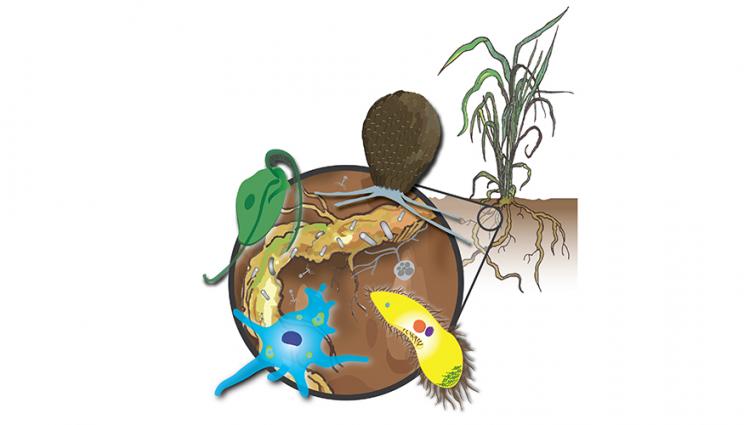 Protists, a diverse group of eukaryotic microbes, respond to the plant’s influence on the physicochemical and biological properties of the root zone in a similar way as previously observed for bacteria and fungi. Protists interact with other rhizosphere microbes through predation and can be plant pathogens. Image by Javier A. Ceja-Navarro.

Underneath it all: dishing the dirt on protists

Plants evolved in a world dominated by prokaryotic and eukaryotic microbes. Underneath the surface, plant roots interact with microbes in the soil, also called the rhizosphere microbiome.

Although bacteria and fungi are well-studied in the rhizosphere (the layer closest to the roots), other components, including viruses and protists, are less well known. A protist is any eukaryotic organism (an organism whose cells contain a nucleus) that is not an animal, plant or fungus. Most protists are unicellular, and many in soil are predators — i.e. they feed on bacteria, fungi, algae — or parasites.

To better understand the extent to which biological and environmental factors shape protist communities, a Lawrence Livermore National Laboratory (LLNL) researcher and collaborators analyzed protist communities associated with the rhizosphere and surrounding soil of switchgrass plants in different developmental stages. Switchgrass is a prairie grass native to the U.S. that has excellent potential as a bioenergy feedstock and is of significant interest to the Department of Energy (DOE). The team found that the diversity of protists was lower in the rhizosphere than in the bulk soil and that the composition of protist communities changes through the different phenological stages of the plant. The research appears in the journal Microbiome.

Despite their widespread distribution and ecological importance, protists remain one of the least understood components of the soil and rhizosphere microbiome. Knowledge of the roles that protists play in stimulating organic matter decomposition and shaping microbiome dynamics continues to grow, but it’s still unclear what biological and environmental factors mediate protist community assembly and dynamics.

“Studies focusing on understanding the mechanisms of plant establishment in soil need to consider protists as a key part of the plant microbiome,” said lead author Javier Ceja Navarro from Lawrence Berkeley National Laboratory (LBNL). “Including protists in terrestrial ecological studies closes the knowledge gaps in our understanding of the complexity of the soil microbiome and microbial trophic interactions.”

In the new study, the team showed that while the types of abundant protists changed during plant growth stages, some plant pathogenic protists and omnivorous protists reoccurred at many stages of development and protist co-occurrence networks were more complex in the rhizosphere than in the bulk soil.

“The results demonstrate that, just like their bacterial prey, protists respond to changes in the environment around plants’ roots,” said LLNL scientist Jennifer Pett-Ridge, a co-author of the paper. “Protists play a key role in mobilizing carbon and soil nutrients as they graze upon bacteria that are plentiful in the rhizosphere. Improving our understanding of patterns in rhizosphere-associated protist communities will help shed light into the root-microbe-soil ecosystem.”

Pett-Ridge heads LLNL’s DOE Scientific Focus Area looking at the soil microbiome, aptly called “Microbes Persist,” because the team is interested in how microbes affect how much carbon sticks around in soil.

Scientists from LBNL, University of California, Berkeley, Tsinghua University, University of Oklahoma, Noble Research Institute and the California Academy of Sciences also contributed to the research. The LLNL portion of the work was funded by the Department of Energy's Office of Science.