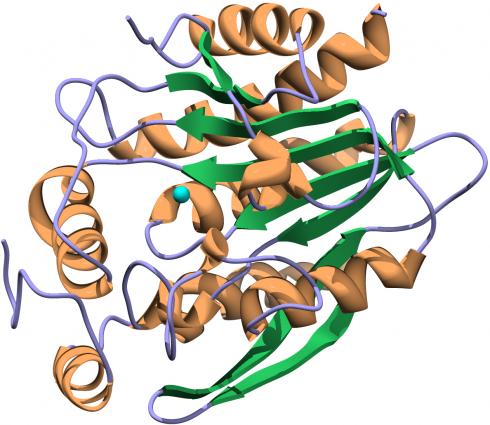 Shown is the X-ray crystal structure of a putative virulence factor protein from Francisella tularensis . The crystals were grown at LLNL, and the X-ray data were collected at the Advanced Photon Source at Argonne National Laboratory. The image was generated with the Chimera molecular graphics package developed by the University of California, San Francisco. Graphic courtesy of Geoffrey Feld /LLNL

Uncovering the secrets of tularemia

Stephen Wampler, wampler1 [at] llnl.gov, 925-423-3107
Tularemia is endemic in the northeastern United States, and is considered to be a risk to biosecurity -- much like anthrax or smallpox -- because it has already been weaponized in various regions of the world.

At the 58th Annual Biophysical Society Meeting, which started Saturday and continues through Wednesday in San Francisco, Geoffrey Feld, a postdoctoral researcher in LLNL's Physical & Life Sciences Directorate, has described his work to uncover the secrets of the bacterium Francisella tularensis, which causes tularemia, also known as "rabbit fever."

"Despite its importance for both public health and biodefense,F. tularensis pathogenesis isn't entirely understood, nor do we fully understand how the organism persists in the environment," Feld explained.

Previous efforts, funded by both the National Institutes of Health and LLNL, demonstrated that amoebae may serve as a potential reservoir for the bacteria in nature. "Specifically, we demonstrated that amoebae exposed to fully virulent F. tularensis rapidly form cysts -- dormant, metabolically inactive cells -- that allow the amoebae to survive unfavorable conditions," said Amy Rasley, the research team leader.

This rapid formation of amoebic cysts, referred to as REP by the researchers for Rapid Encystment Phenotype, was induced by F. tularensis in the laboratory and was required for the long-term survival of the bacteria. Further exploration identified secreted F. tularensis proteins, which are responsible for the observed encystment of the amoeba.

In the new work, Feld and colleagues characterized two of these REP proteins -- called REP24 and REP34 -- and began to describe their functions based on their three-dimensional crystal structures.

Rasley and colleagues believe that careful characterization of these two novel F. tularensis proteins may shed light on how this organism persists in the environment and causes disease.

"Ultimately, this type of research could inform efforts to combat the disease, although there is much work to do. Currently, we don't know the protein targets in the host -- amoeba, human, etc. -- that the REP proteins act on, nor do we know the mechanism by which the proteins could help F. tularensis survive in the environment or cause disease," Feld said.

"Once these questions are elucidated, a broader understanding of environmental persistence and pathogenesis might lead to better diagnostics and/or novel countermeasures to combat tularemia," he added.

The work on determining the structures of the REP proteins has been supported by an ongoing Laboratory Directed Research and Development (internal Lab funding) project on "Dynamical Imaging of Biomolecular Interactions" led by Matthias Frank in the Physics Division of LLNL's Physical & Life Sciences directorate.

Each year, the Biophysical Society Annual Meeting brings together more than 7,000 researchers working in the multidisciplinary fields representing biophysics. With more than 4,200 poster presentations, more than 200 exhibits, and more than 20 symposia, the BPS Annual Meeting is the largest meeting of biophysicists in the world.