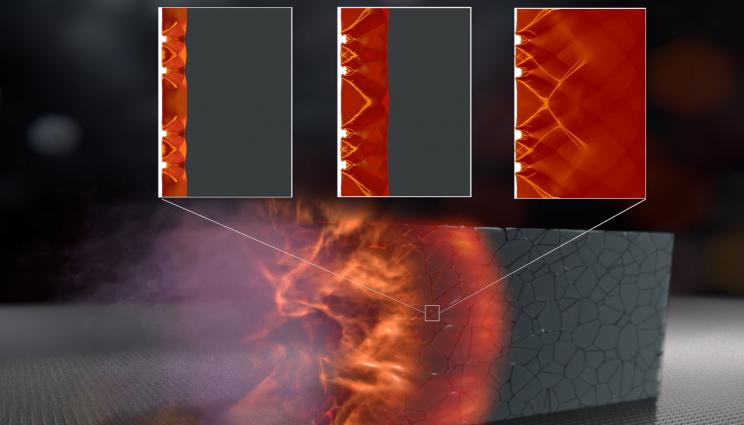 A team of scientists at Lawrence Livermore National Laboratory (LLNL) has shown that the structure of microscopic pores in high explosive materials can significantly impact performance and safety. These findings --  published recently as the cover article in the journal Propellants, Explosives, Pyrotechnics --  open the door to the possibility of tuning high explosives by engineering their microstructure.

"The funny thing about explosives is that they have these little defects and pores and holes," said research scientist Keo Springer, lead author on the paper and researcher at LLNL’s High Explosives Applications Facility. "It turns out that that’s an important part of what makes them work. Explosive performance, in a broad sense, isn’t just a chemistry question, it’s a microstructure question."

In most high explosives, detonation is initiated through a process where pores get compressed by a shockwave. When a pore collapses, it creates a hotspot capable of initiating a chemical reaction in the microscopic crystalline grains of explosive material. This research focused on an explosive compound called HMX, which is known to be more sensitive and more dangerous to work with than other explosives. The fundamental question at the root of this study was whether it makes a difference if the pores are located in the interior of the grains or on their surface.

"We found out that when pores are at the surface, they speed up the reaction," Springer said. "We also discovered that if a shockwave hits a number of surface pores at once, they bootstrap each other. It’s an explosive party, and they party well together."

In addition to pore location, the team examined whether it makes a difference if the porosity is distributed across many small pores or across fewer larger pores. While they showed that many small pores can work together to accelerate one another’s burning, they also were able to identify a threshold where pores become so small that the reaction is extinguished.

This examination was conducted in a series of numerical simulations on LLNL supercomputers with the multi-physics code, ALE3D. Next steps for the research team -- Springer, along with LLNL scientists Sorin Bastea, Al Nichols, Craig Tarver and Jack Reaugh -- include verifying that the numerical simulations capture the real physical and chemical processes. A direct way to do that is to conduct micro-scale experiments to quantify pore collapse mechanisms and reactivity.

"Validation is the tough part," Springer said. "Ideally, we would need a really good magnifying glass and the ability to stop time. We’re talking about sub-micron resolution with a shutter speed on the order of nanoseconds. What’s neat is that the research community is starting to work on this.

"If we can engineer initiation properties into the microstructure of explosives, it would be a game changer for industry and for the safety of the nuclear stockpile. But we have a long way to go to realize that vision. This type of research is very important, but just one of the first steps."