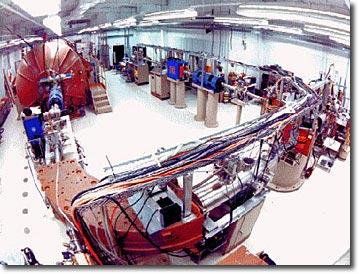 SACRAMENTO, Calif. — A team of scientists and a physician at the University of California, Davis, and Lawrence Livermore National Laboratory (LLNL) have developed a safer, more accurate test for pernicious anemia and other conditions related to the poor absorption of vitamin B12.

Details of the innovative test – which uses micro doses of carbon-14-labeled vitamin B12 produced by a modified strain of Salmonella bacteria and a $2 million accelerator mass spectrometer to measure vitamin levels – is published online in the April issue of the Proceedings of the National Academy of Sciences. The research was also presented today (April 3) at the Experimental Biology 2006 meeting at the Moscone Center South in San Francisco.

The discovery, including the first test in a human subject, is important because it gives researchers a practical alternative to the current near-obsolete laboratory test for determining if a patient’s low B12 level is due to the inability to properly absorb the vitamin. The simple test would allow physicians to easily diagnose patients with vitamin B12 absorption problems before anemia, dementia and other permanent damage develop.

An estimated one million Americans over the age of 65 are unable to properly absorb vitamin B12. Many of them are unaware that they have the condition, known as pernicious anemia, which puts them at risk for developing debilitating fatigue and neurological problems. At the same time, physicians treating the elderly are frustrated by the lack of a safe and simple way to test for poor vitamin B12 absorption in their patients.

"If you can make the diagnosis, the treatment is easy and the damage can be reversed. But, making the diagnosis is tricky," said Ralph Green, professor and chair in the Department of Pathology and Laboratory Medicine at UC Davis School of Medicine. "The symptoms of poor B12 absorption and deficiency are nonspecific. In fact, dementia and neuropathies may be the only clinical manifestations, and by then, irreversible damage has already occurred."

The current definitive test for pernicious anemia, called the Schilling test, involves the ingestion of a low but significant amount of radiation and the collection of all urine produced in a 24-hour period. In contrast, the new test uses a single drop of blood and involves negligible radiation exposure – an amount equivalent to that received on a cross-country flight.

To measure vitamin B12 absorption with the new test, the researchers had a healthy male subject drink water containing 1.5 micrograms of purified carbon-14-labeled vitamin B12 (14C- B12), an amount of vitamin B12  equivalent to that found in a 2-ounce steak. Blood samples were taken every hour for the first 12 hours, and then less frequently thereafter to assess absorption of the labeled vitamin. The blood samples were then analyzed at LLNL using an accelerator mass spectrometer, a sophisticated instrument that counts single atoms of 14C.

"Our study showed that labeled 14C-B12 is absorbed and metabolized normally and that we have a powerful new tool to assess vitamin B12 absorption," said Green. "While Lawrence Livermore National Laboratory operates one of a handful of accelerator mass spectrometers in the United States applied to bioscience, I can envision a day when 14C-B12 is formulated into tablet form and small, 14C-labeled samples of blood from a finger-prick are mailed to a central laboratory for analysis."

The research is an example of the scientific discoveries that are possible when leading clinicians and basic scientists with diverse expertise collaborate to find innovative solutions to important clinical problems.

The UC Davis researchers collaborated to create the microscale system in bacteria that produced the 14C-B12 compound and evaluated absorption in a human subject. The team included nutritional biochemists Stephen R. Dueker and Colleen Carkeet at the School of Agricultural and Environmental Sciences, who worked with microbiologists John Roth and Peter Anderson from the College of Biological Sciences to synthesize the new compound in Salmonella enterica , a bacterium that normally produces B12 under anaerobic conditions. It also included Green and Joshua Miller, B and B12 vitamin experts from the School of Medicine, and nuclear physicist Bruce Buchholz at LLNL, who designed dosimetry and conducted the accelerator mass spectrometry studies.

"I think UC Davis is one of the few places in the world where the expertise and technology could have come together to do this project," said Miller, a principal investigator of the study and an associate professor of pathology and laboratory medicine at UC Davis.

Archeologists have long used 14C dating to measure artifact age, and pharmaceutical companies have used it more recently with accelerator mass spectrometry to trace the path of drugs and their metabolites throughout the body. But coming up with a simple test using 14C for vitamin B12 was anything but easy, say the researchers.

"I knew it was technologically possible to create 14C-B12 and use it to measure levels of the vitamin in blood via accelerator mass spectrometry," said Dueker. "But we were having difficulty finding a strain of bacteria to produce the vitamin with the 14C in just the right place."

That’s when they turned to fellow microbiology professor John Roth and his postdoctoral fellow Peter Anderson, who was working on a strain of Salmonella bacteria that turned out to be perfect for creating 14C-B12.

"We turned this bacteria into a micromachine for making labeled B12," said Anderson. "The strain of bacteria was so efficient, that it converted all the labeled material it was given into 14C-B12. Vitamin B12 is one of nature's most complex substances. By harnessing the power of bacteria, we were able to create the test."

"We’ve traced toxins, pesticides and nutrients in humans for academic studies for more than a decade at Lawrence Livermore," Buchholz said. "But this is the first clinical use of accelerator mass spectrometry."

With the initial studies behind them, the researchers have patented the technology and are now planning to expand their human studies and license the technology to a company that will make the test available for practicing physicians.

"Accelerator mass spectrometry is the most exciting tool to enter clinical development in the past several decades," said Dueker. "The sky is the limit when you can get quantitative information from a single drop of blood."

The need for a simple test for pernicious anemia is one that will grow as the U.S. population ages, Green said. That’s because the human stomach fails with age and disease, and gradually produces less of a protein called intrinsic factor, which normally binds to B12 found in animal protein and allows it to be absorbed by the lower intestine.

In addition to anemia, B12 deficiency also results in slow damage to the protective sheath around neurons, called a myelin sheath. People suffering from pernicious anemia, therefore, can experience symptoms ranging from fatigue and loss of appetite, to unsteady gait and personality changes. When caught early, pernicious anemia can be treated with monthly shots or daily high dose tablets of vitamin B12 to correct the anemia and reverse the damage to the myelin sheath.

The new test also will allow physicians to rule out pernicious anemia in patients who have a B12 deficiency caused by vegan diets and diseases such as gastritis. "It’s just not good medicine to say ‘You’re vitamin B12 deficient, you’ll need to take shots for the rest of your life,’" Miller said. "The new test will allow physicians to develop more science-based interventions and direct the most appropriate treatment for patients."

"The new test promises to become the ‘gold standard’ for determining if a person suffers from malabsorption of vitamin B12," predicted Green.