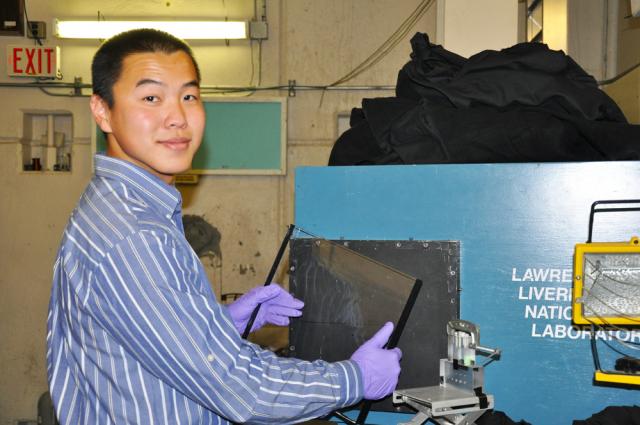 For someone who is as excited about scientific research as Han Wang, there is no better place to thrive than at Lawrence Livermore Lab.

A recent UC Berkeley graduate with a bachelor's degree in engineering mathematics, Wang is spending his summer balancing two very different jobs.  As a Lab summer intern, he is gaining experience in his field of study in order to decide to go on to graduate school or work full time.  As part of the ROTC program, he is fulfilling his duties in the Army Reserve.

Based in Camp Parks in Dublin, Wang is a member of the 319th Battalion, Bravo Company, and the 2nd Platoon leader.  His company is currently deployed to Afghanistan, except for 28 individuals who are either in unfit condition to deploy or in Wang's case, joined the company too late to be ready by the deployment date.  One weekend per month is spent at Camp Parks, where Wang and his company drill for two days.  This time is reserved for refreshing skills they have learned in Basic Training as well as any supplemental specialized training.

"We have to put out a lot of Army mandatory training, so it's like our version of LTRAIN," Wang said.

Wang, who is originally from Orange County, is spending his time at the Lab working on a project with a promising future.

"The setup is to have a scintillator that produces visible photons when it captures neutrons, and th en direct these photons via a mirror to a standard Digital SLR [camera] to produce the image," he continues.

While this is the only project he is currently working on, it is a multi-step challenge.  "After we get this article out on the correction method, we're trying to move on to the next step, which will be actually taking all the computation stuff and doing it in real life," he notes regarding the project's next stage.  In the long term, Wang hopes to get the technology licensed out.  If it goes well, Wang says it could significantly improve the capabilities of portable neutron imaging systems.

If the project makes it that far, his time at the Lab might be extended to see it through.  "I'm here for a one year appointment; we're trying to see how far the project will take us. If it goes well, I might stay on for an extra year just to finalize things and hopefully get into a patent process," Wang explains.  If the project stalls, he plans on attending graduate school, hopefully at Stanford, after leaving the Lab.

The future looks promising.  In the meantime, Han and his team have just learned that his journal paper, titled "Reconstruction Algorithm for Point Source Neutron Imaging through Finite Thickness Scintillator" has been accepted for publication in Nuclear Instruments and Methods in Physics Research, A .  This is an accomplishment that not many reach right after a bachelor's degree.

"Han has been a significant contributor to the project so far and we hope this experience helps him build his career," Tang said.

While he says his favorite part of the Lab is "being able to use the supercomputer whenever I want to," he also has an important role in our country's safety. "The Army Reserves] always gives me the opportunity to help out if something terrible does happen to the world."