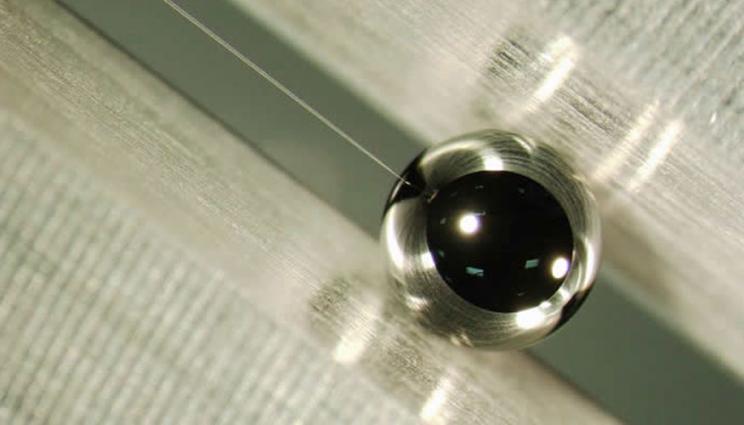 A 2-micron fill tube is inserted into the fuel capsule. Credit: General Atomics

Lawrence Livermore National Laboratory's National Ignition Facility (NIF) and General Atomics engineers have created an inertial confinement fusion (ICF) fuel capsule with a 2-micron-diameter fill tube — and along the way, found a solution to a "Bay Bridge"-like dilemma that could have dramatically slowed the process of fabricating NIF capsules.

Last month, NIF conducted the first test of a 2-micron tube used to inject hydrogen fuel into a target capsule. The tiny tube worked as designed and reduced the footprint of the 5- and 10-micron tubes that were shown to cause problems in NIF implosions.

The slim glass tubes also fit into fuel capsules made with a different technique, called pressure cycling, which was new for this application. That cut manufacturing time from a projected six months to about two days.

Both improvements are important steps toward achieving NIF’s stockpile stewardship mission. ICF is a key aspect of ensuring the safety, security and reliability of the nation’s nuclear weapons.

"Now we’re going to see how much better it gets when you make the fill tube even smaller," said Deputy Program Manager Michael Stadermann. "Going from 10 to 5 (in earlier experiments) was a big improvement in performance."

The fill tubes are used to inject a deuterium and tritium (DT) fuel mixture into a peppercorn-sized spherical shell suspended inside a hohlraum. NIF’s 192 high-energy laser beams hit the hohlraum’s inner walls, generating X-rays that trigger a fusion reaction as the DT mixture compresses into an energy-generating hot spot.

But researchers previously determined through shot data and computer simulations that 10-micron fill tubes, while only about one-sixth the average diameter of human hair, were a factor in perturbations that degraded NIF’s implosion performance, particularly in experiments using diamond ablator shells.

"Ideally when you do an experiment on NIF, you want to have a flawless round shell that has the fuel inside," Stadermann said. "Any kind of deviation from perfect leads to perturbations, which in turn can reduce the amount of fusion we can get."

The fill tube, he explained, leads to a "small conundrum. We have to get the fuel inside the capsule, but at the same time, when we put a fill tube in, we create an imperfection." 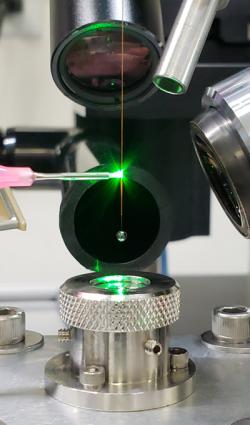 Reducing widths from 10 microns to 5 microns helped. Earlier this year, NIF achieved a total fusion neutron yield of 1.9×1016 (19 quadrillion), double the previous record. The complexity of slimming the fill tubes, however, increased the manufacturing time of capsules from about one week to about four weeks.

Diamond Materials GmbH in Germany makes diamond shells by overcoating a silicon ball mandrel with high density carbon. At General Atomics in San Diego, a mixture of nitric and hydrofluoric acid is injected through a hole drilled for the fill tube. The acid etches out the mandrel’s material, eventually leaving just the diamond shell, which is then attached to the fill tube to form capsule fill tube assemblies.

With wider fill holes, the acid-dissolved mandrel would exit by diffusion through the hole within a few days. The move to 5-micron fill tubes, however, required smaller laser-drilled fill holes, which increased the diffusion time.

"The narrower you make that opening, the harder it is to get the dissolved mandrel out," he said. "It’s like having an eight-lane highway that goes into San Francisco and suddenly you cut it down to four lanes. You’re still trying to get the same number of cars into the city every day, so you’re going to have a traffic jam and it’s going to take a lot longer for everybody to get in."

When contemplating a slimmer tube about a year ago, LLNL and General Atomics engineers made a disheartening calculation: Based on the exponential time increase involved in going from 10 microns to 5 microns, making the capsule accommodate a 2-micron tube could take as long as six months.

"That was unbearable, obviously," Stadermann said.

"When the idea of 2-micron fill tubes was floated around, we joked that we would all be retired by the time one shell was finished leaching," he said.

Undaunted, the General Atomics team — including Neal Rice and Wendi Sweet — pressed forward. Kong said the pressure-cycling idea came from several people, including Lab scientist Tom Braun, who showed a video depicting how pressure could drive liquid in and out of a shell for a different NIF-related application. LLNL scientists Juergen Biener and Tom Bunn helped support the General Atomics team’s efforts.

With pressure cycling, the shell is placed in a small vial inside a pressurization vessel. The pressure is increased to as much as five atmospheres, shrinking the gas bubble that forms inside from the etching process and sucking in fresh acid. The vessel is then depressurized, which expands the bubble and pushes out the unwanted mandrel material. The cycle is repeated until the remaining material has flowed out.

"We were able to reduce this etching process from six months to several days for the 2-micron hole, at the same time shortening the time for 5-micron drill holes to less than a day from about a month," Stadermann said.

The team also had to ensure the fragile 2-micron tubes could be made and assembled with the capsule. The tube’s 2-micron portion is only about a millimeter long and connects to a longer portion that tapers out beyond the capsule to about 40 microns in diameter.

But the vendor that made the 5-micron tube could not supply a thinner version. Jay Crippen, engineering manufacturing liaison for the General Atomics Inertial Fusion Technologies division, worked with other vendors to qualify a new source. 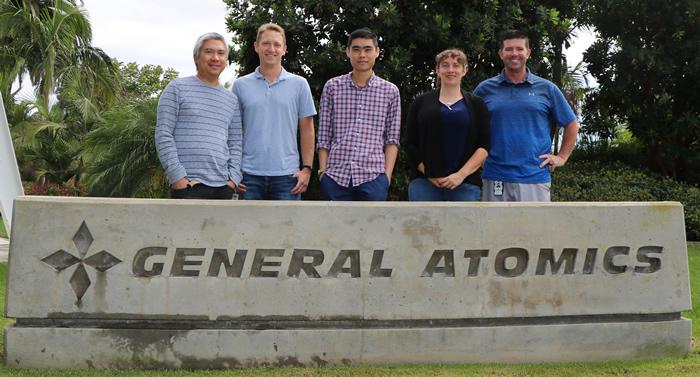 The team also had to test the glue that holds the tube in place as fuel is pumped in and cryogenically frozen, said Crippen, who Stadermann praised as a "wizard of assembly."

Two targets with 2-micron fill tubes have been assembled at LLNL to assure they will survive the process. While the team is refining manufacturing and handling procedures, its members are confident the process can become routine within the next year.

"We knew there was going to be a learning curve," Crippen said.