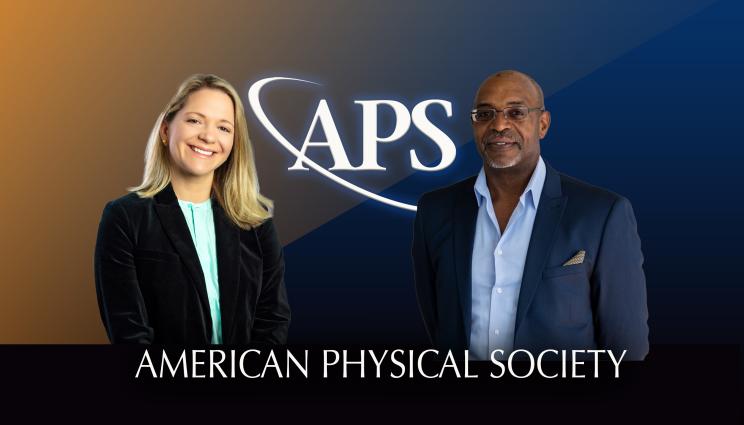 From left: Physicists Andrea (Annie) Kritcher and Ronnie Shepherd have been selected as 2022 APS fellows by the APS Division of Plasma Physics.

Physicists Andrea (Annie) Kritcher and Ronnie Shepherd were both selected by the APS Division of Plasma Physics.

APS fellowships are awarded after extensive review and are considered a distinct honor because the evaluation process, conducted by the fellowship committees of individual divisions, topical groups and forums, relies on nomination and recommendation by one’s professional peers.

Annie Kritcher, a physicist in the Weapons and Complex Integration’s Design Physics Division, was selected “for leadership in integrated hohlraum design physics leading to the creation of the first laboratory burning and igniting fusion plasma.”

“I am extremely honored to be receiving this award," she said. "This is one of the most important awards I will achieve in my career and I’m grateful to have been chosen to become an APS fellow.”

Kritcher started at LLNL as a summer intern in 2004, then did her thesis work through the Lab until 2009. She became a Lawrence postdoc in 2009 and in 2012, she transitioned to a member of the technical staff.

She is a team lead within the Inertial Confinement Fusion (ICF) program, where she oversees the integrated modeling of indirect-drive fusion designs fielded at the NIF. She was the lead designer for the recent experiments to achieve greater than a megajoule (MJ) of fusion energy output and ignition by Lawson Criterion in the laboratory. She also participated in designing experiments to measure the equation of state (EOS) of material to the highest pressures achieved in the laboratory.

In her future endeavors, Kritcher plans to continue overseeing the integrated modeling and design work as team lead in the ICF program, for ignition class experiments at the NIF. Future efforts include developing a robust MJ capability and making design changes to additionally increase fusion energy output.

Ronnie Shepherd, a physicist in the Physical and Life Sciences’ Physics Division, was selected “for contributions to understanding HED plasmas through experiments at short-pulse lasers, for the development of time-resolved diagnostics for these measurements and for the contribution of countless hours and deep commitment to sustained mentoring of numerous early-career scientists.”

“I am honored at being elected an APS-DPP fellow,” he said. “The honor is a recognition of all the hard work of those that have helped develop the LLNL ultrafast X-ray streak camera, analyze the data and perform simulations to interpret the physics. I owe them all a great debt of gratitude.”

A 38-year Lab veteran, Shepherd serves as the director of outreach at the High Energy Density Science Center. His work focuses on experimental studies of atomic processes in high-density plasmas. The experiments are performed using ultrafast X-ray spectroscopy of short-pulse, laser-heated solids.

As for his future research, Shepherd will continue efforts on opacities inferred from short-pulse, laser-heated solids, energy transport in high-energy-density matter and utilizing short-pulse laser-matter interactions to study fundamental properties of matter.