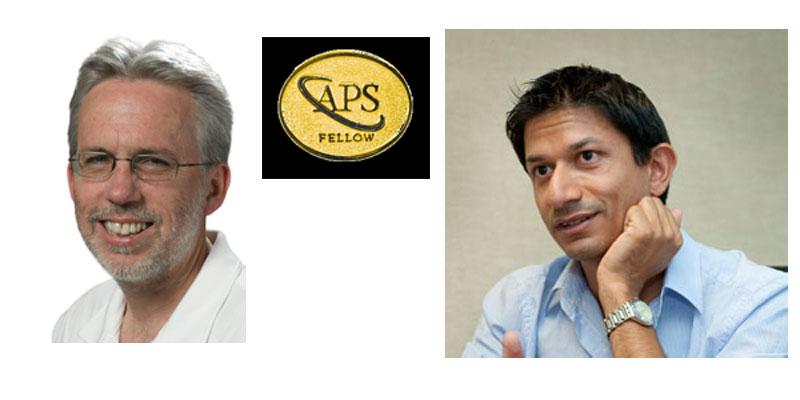 John Moody and Pravesh Patel have been selected 2013 fellows of the American Physical Society.

Moody joined LLNL in 1991 and has been involved in a variety of areas in the Inertial Confinement Fusion Program, including laser-plasma interaction, cryogenic studies, backscatter and optical diagnostics. His research interests include high temperature/high density plasmas, short-pulse laser-matter interactions and properties of solid hydrogen. He received a bachelor's degree in physics from the University of California, Berkeley and a master's and Ph.D. in physics from the Massachusetts Institute of Technology.

"It's primarily the people at LLNL who make doing the science so rewarding. I feel very fortunate to be surrounded by brilliant and dedicated people who constantly challenge me to find a way through unknown territory and experience the joy of discovery," Moody said. "Of course, the problems we work on together are very exciting and have tremendous impact. The scope of the work at LLNL has also provided me with many valuable and rewarding opportunities to work with other excellent scientists both nationally and internationally."

Physics Division researcher Pravesh Patel was cited in the plasma physics category for "pioneering contributions in the science of ultra-intense laser-matter interaction and particle acceleration and applications to creating and probing high energy density plasma states, and for his leadership in advancing the fast ignition concept for inertial confinement fusion."

Since joining LLNL, Patel's research has focused on experimental physics using ultrashort-pulse high-intensity lasers, in particular developing new techniques to create and probe high energy density matter. Since 2008, Patel has led a program to study the use of high-intensity lasers for fusion through the fast ignition approach to inertial confinement fusion. He received his B.A. in physics from St. John's College, Oxford University in 1994, and his Ph.D. from the Clarendon Laboratory, Oxford University in 1998, where he studied radiation transport in laser-produced plasmas.

"I feel honored to have received this recognition from my colleagues," Patel said. "I have had the pleasure and good fortune to have worked with many outstanding scientists from both within and outside LLNL who share in the credit."

In the past 30 years, nearly 100 LLNL employees have been elected APS fellows.

APS fellowships are awarded after extensive review and are considered a distinct honor because the evaluation process, conducted by the fellowship committees of individual divisions, topical groups and forums, relies on nomination and recommendation by one's professional peers. Election to APS fellowship is limited to no more than one half of 1 percent of APS' membership for a given year.