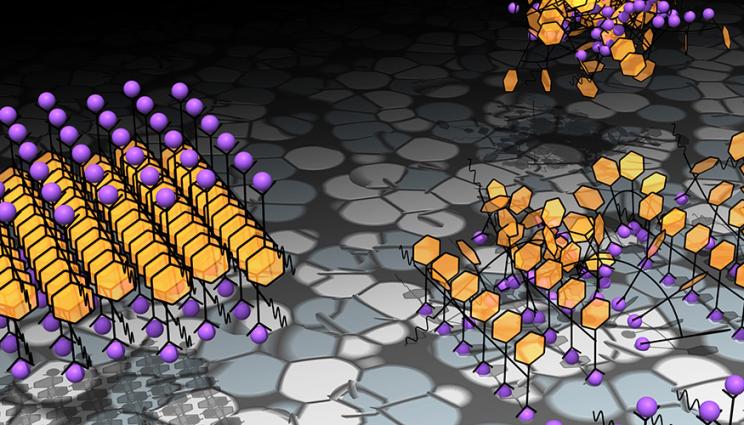 A small change to a peptoid that crystallizes in one step (left) sends the modified peptoid down a more complicated path from disordered clump to crystal (right).

Silky chocolate, a more effective medical drug or solar panels all require the same thing: just the right crystals to make the material. Now scientists trying to understand the paths crystals take as they form have been able to influence that path by modifying the starting ingredient.

The insights could lead to better control of drug development, energy technologies and even food. The research, which resulted from a collaboration between Pacific Northwest National Laboratory (PNNL) and Lawrence Livermore National Laboratory (LLNL) scientists, appears in the April 17 edition of the journal Nature Materials.

"The findings address an ongoing debate about crystallization pathways," said materials scientist Jim De Yoreo at the Department of Energy's PNNL and the University of Washington and formerly of LLNL. "They imply you can control the various stages of materials assembly by carefully choosing the structure of your starting molecules."

One of the simplest crystals, diamonds, are composed of one atom -- carbon. But in the living world, crystals, like the ones formed by cocoa butter in chocolate or ill-formed ones that cause sickle cell anemia, are made from molecules that are long and floppy and contain a lengthy well-defined sequence of many atoms. They can crystallize in a variety of ways, but only one way is the best. In pharmaceuticals, the difference can mean a drug that works versus one that doesn't.

Chemists don't yet have enough control over crystallization to ensure the best form, partly because chemists aren't sure how the earliest steps in crystallization happen. A particular debate has focused on whether complex molecules can assemble directly, with one molecule attaching to another, like adding one playing card at a time to a deck. They call this a one-step process, the mathematical rules in which scientists have long understood.

The other side of the debate argues that crystals require two steps to form. Experiments suggest that the beginning molecules first form a disordered clump and then, from within that group, start rearranging into a crystal, as if the cards have to be mixed into a pile first before they could form a deck. De Yoreo and his colleagues wanted to determine if crystallization always required the disordered step, and if not, why.

The scientists formed crystals from a somewhat simplified version of the sequence-defined molecules found in nature, a version they call a peptoid. The peptoid was not complicated -- just a string of two repeating chemical subunits (think "ABABAB") -- yet complex because it was a dozen subunits long. Based on its symmetrical chemical makeup, the team expected multiple molecules to come together into a larger structure, as if they were Lego blocks snapping together.

In a second series of experiments, they wanted to test how a slightly more complicated molecule assembled. So the team added a molecule onto the initial ABABAB sequence that stuck out like a tail. The tails attracted each other, and the team expected their association would cause the new molecules to clump. But they weren't sure what would happen afterward.

The researchers put the peptoid molecules into solutions to let them crystallize. Then the team used a variety of analytical techniques to see what shapes the peptoids made and how fast. Using conventional atomic force microscopy (AFM) tools at PNNL, and a new ultra-fast atomic force micropscope at Lawrence Livermore, the team found that the two peptoids formed crystals in very different fashions.

As the scientists mostly expected, the simpler peptoid formed initial crystals a few nanometers in size that grew longer and taller as more of the peptoid molecules snapped into place. To prove that the simple peptoid followed all the rules of a one-step crystallization process, LLNL team members -- staff scientist Alex Noy and postdoc Yuliang Zhang -- used high-speed AFM imaging to visualize the initial fast stages of this direct crystallization pathway.

But thrusting the tail into the mix disrupted the calm, causing a complex set of events to take place before the crystals appeared. Overall, the team showed that this more complicated peptoid first clumped together into small clusters unseen with the simpler molecules.

Some of these clusters settled onto the available surface, where they sat unchanging before suddenly converting into crystals and eventually growing into the same crystals seen with the simple peptoid. This behavior was something new and required a different mathematical model to describe it, according to the researchers. Understanding the new rules will allow researchers to determine the best way to crystallize molecules.

"We were not expecting that such a minor change makes the peptoids behave this way," De Yoreo said. "The results are making us think about the system in a new way, which we believe will lead to more predictive control over the design and assembly of biomimetic materials."

This work was supported by the Department of Energy Office of Science.