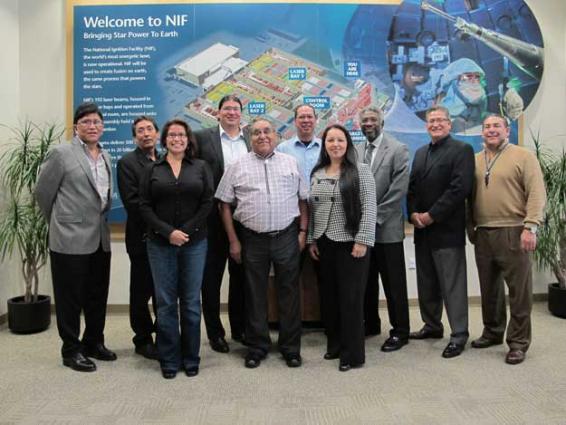 Advisory board members from the newly created Tribal Clean Energy Resource Center (TCERC) visited the Laboratory last week.  Lead by Hopi Chairman LeRoy Shingoitewa  and William Cornelius, Oneida Tribe of Indians of Wisconsin, the TCERC members got a firsthand tour of the Laboratory.

The TCERC board members met all week with several hundred tribes at the National Congress for American Indian (NCAI) Conference in Sacramento. TCERC formally launched nationally last week at the NCAI conference which hosts 4,000 tribal participants.

The TCERC advisory board visited the Laboratory because LLNL and Sandia serve as technical advisers to TCERC.  Board member Ann Marie Chischilly, stated: "The mission of TCERC is to foster the transition of Native American tribes and Alaskan Native Villages from fossil fuel to renewable and clean energy."  Northern Arizona University's (NAU) TCERC goal is to become the nation's leading university serving Native Americans in clean energy.

Shingoitewa  stated: "We hope to see technical assistance come from university project staff, DOE national laboratories and other external partners."  He also stated that "national laboratories have a tremendous amount of science and engineering resources to assist tribes which we hope to tap."

Northern Arizona University is one of two universities funded by the National Nuclear Security Administration to bring Native Americans students to the national Laboratories, according to Joseph Martin. He also mentioned that through that program "we have had a number of excellent NAU students come and spend their summers working alongside the scientists and engineers of Lawrence Livermore."

Northern Arizona University serves students coming from more than 50 tribal nations and has an American Indian student population of more than 1,500, which is one reason TCERC was ideal at NAU.

"TCERC has tremendous tribal support and the Laboratory is proud to be part of their technical team," said Steve Grey, Laboratory program manager.