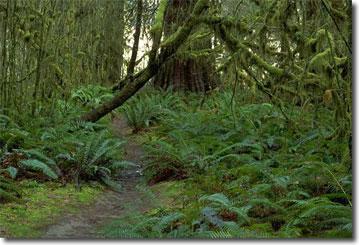 Planting and preserving forests in the tropics is more likely to slow down global warming.

Trees to offset the carbon footprint?

LIVERMORE, Calif. - How effective are new trees in offsetting the carbon footprint? A new study suggests that the location of the new trees is an important factor when considering such carbon offset projects. Planting and preserving forests in the tropics is more likely to slow down global warming.

But the study concludes that planting new trees in certain parts of the planet may actually warm the Earth.

The research, led by Lawrence Livermore National Laboratory atmospheric scientist Govindasamy Bala, appears in the April 9-13 online edition of the Proceedings of the National Academy of Sciences .

According to the study,  new forests in mid- to high-latitude locations could actually create a net warming. Specifically, more trees in mid-latitude locations like the United States and most of Europe would only create marginal benefits from a climate perspective. But those extra trees in the boreal forests of Canada, Scandinavia and Siberia could actually be counterproductive, Bala said.

Forests affect climate in three different ways: they absorb the greenhouse gas – carbon dioxide – from the atmosphere and help keep the planet cool; they evaporate water to the atmosphere and increase cloudiness, which also helps keep the planet cool; and they are dark and absorb sunlight (the albedo effect), warming the Earth. Previous climate change mitigation strategies that promote planting trees have taken only the first effect into account.

"Our study shows that only tropical rainforests are strongly beneficial in helping slow down global warming," Bala said. "It is a win-win situation in the tropics because trees in the tropics, in addition to absorbing carbon dioxide, promote convective clouds that help to cool the planet. In other locations, the warming from the albedo effect either cancels or exceeds the net cooling from the other two effects."

Other researchers from the Carnegie Institution, Stanford and Université Montpellier II, France also contributed to the report.

The study concludes that by the year 2100, forests in mid- and high-latitudes will make some places up to 10 degrees Fahrenheit warmer than would have occurred if the forests did not exist.

The authors caution that the cooling from deforestation outside the tropics should not be viewed as a strategy for mitigating climate change. "Preservation of ecosystems is a primary goal of preventing global warming, and the destruction of ecosystems to prevent global warming would be a counterproductive and perverse strategy," said Ken Caldeira, from the Carnegie Institution and a co-author of this report.

"Apart from their role in altering the planet’s climate, forests are valuable in many other aspects," Bala said. "Forests provide natural habitat to plants and animals, preserve the biodiversity, produce economically valuable timber and firewood, protect watersheds and indirectly prevent ocean acidification.

"In planning responses to global challenges, it is important to pursue broad goals and avoid narrow criteria that may lead to environmentally harmful consequences," Caldeira said.

Founded in 1952, Lawrence Livermore National Laboratory has a mission to ensure national security and to apply science and technology to the important issues of our time.  Lawrence Livermore National Laboratory is managed by the University of California for the U.S. Department of Energy’s National Nuclear Security Administration.
Laboratory news releases and photos are also available at http://www.llnl.gov/PAO and on UC Newswire.

Combined climate and carbon-cycle effects of large-scale deforestation
Plant a tree and save the Earth?