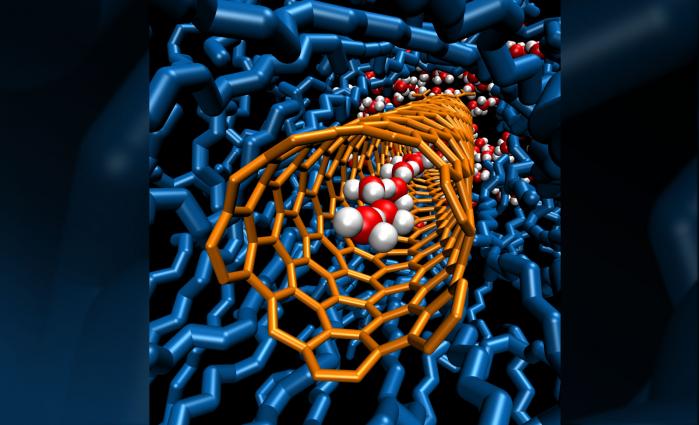 A single chain of water molecules lines the cavity inside a carbon nanotube porin, which is embedded in a lipid bilayer. Image by: Y. Zhang and Alex Noy/LLNL.

For the first time, Lawrence Livermore National Laboratory (LLNL) researchers have shown that carbon nanotubes as small as eight-tenths of a nanometer in diameter can transport protons faster than bulk water, by an order of magnitude.

The research validates a 200-year old mechanism of proton transport.

A nanometer is one billionth of a meter. By comparison, the diameter of a human hair is 20,000 nanometers.

"The cool thing about our results is that we found that when you squeeze water into the nanotube, protons move through that water even faster than through normal (bulk) water," said Aleksandr Noy, an LLNL biophysicist and a lead author of the paper. (Bulk water is similar to what you would find in a cup of water that is much bigger than the size of a single water molecule).

The idea that protons travel fast in solutions by hopping along chains of hydrogen-bonded water molecules dates back 200 years to the work of Theodore von Grotthuss and still remains the foundation of the scientific understanding of proton transport. In the new research, LLNL researchers used carbon nanotube pores to line up water molecules into perfect one-dimensional chains and showed that they allow proton transport rates to approach the ultimate limits for the Grotthuss transport mechanism.

Of all man-made materials, the narrow hydrophobic inner pores of carbon nanotubes (CNT) hold the most promise to deliver the level of confinement and weak interactions with water molecules that facilitate the formation of one-dimensional hydrogen-bonded water chains that enhance proton transport.

Earlier molecular dynamic simulations showed that water in 0.8-nm diameter carbon nanotubes would create such water wires and predicted that these channels would exhibit proton transport rates that would be much faster than those of bulk water. Ramya Tunuguntla, an LLNL postdoctoral researcher and the first author on the paper, said that despite significant efforts in carbon nanotube transport studies, these predictions proved to be hard to validate, mainly because of the difficulties in creating sub-1-nm diameter CNT pores.

However, the Lawrence Livermore team along with colleagues from the Lawrence Berkeley National Lab and UC Berkeley was able to create a simple and versatile experimental system for studying transport in ultra-narrow CNT pores.  They used carbon nanotube porins (CNTPs), a technology they developed earlier at LLNL, which uses carbon nanotubes embedded in the lipid membrane to mimic biological ion channel functionality. The key breakthrough was the creation of nanotube porins with a diameter of less than 1 nm, which allowed researchers for the first time to achieve true one-dimensional water confinement.

Other Livermore and Berkeley researchers include Frances Allen, Kyunghoon Kim and Allison Belliveau. The work was funded by the Department of Energy’s Office of Basic Energy Sciences.