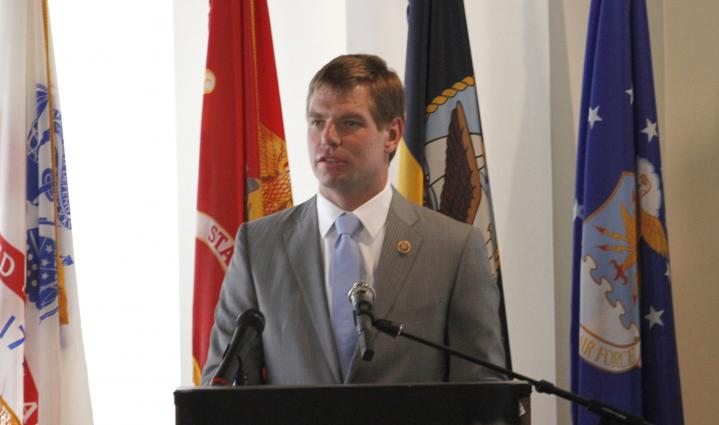 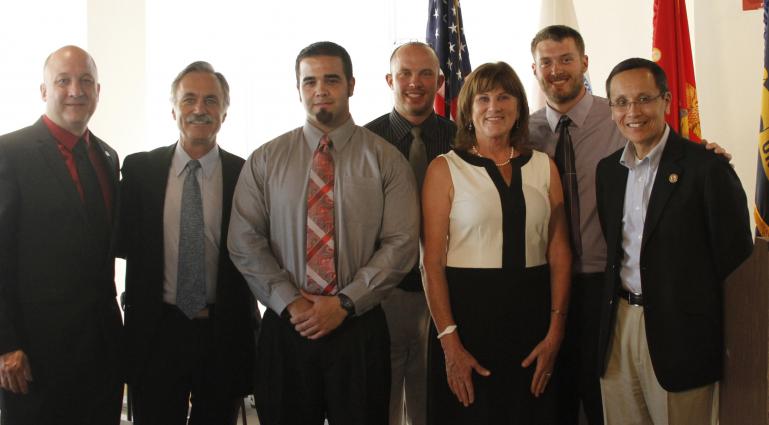 Howard "Chuck" Lattin, Logan Bekker and Jacob Akers spent their adult lives serving their country. This summer, the three veterans got a chance to do an internship at a place that's also dedicated to serving its country: Lawrence Livermore National Laboratory (LLNL).

A partnership with Las Positas College and East Bay Community Services enabled them to become the first veterans to complete the inaugural Veteran Internship Program (VIP). The program combines their education at Las Positas with a hands-on internship at the Lab. East Bay funded the Lab internships in engineering and business development.

"It was a great program," said Lattin, 25, who served as an Army specialist in Iraq. "My whole experience at the Lab, I thought, was a once-in-a-lifetime opportunity. Because of this experience, I've now set my professional goals much higher."

The men were honored Aug. 15 at a recognition and celebration ceremony at Las Positas. The ceremony included officials from the college, Lab, East Bay, family and friends, and dignitaries such as Congressman Eric Swalwell; Livermore Mayor John Marchand; and Dublin Mayor Tim Sbranti.

"I think we should call these guys Washington, Jefferson and Madison because they are the founding fathers of this program," Swalwell said.

Beth McCormick, LLNL's Strategic Human Resources Management's Diversity program leader, who helped organized the internship program, said: "We [LLNL] like to hire vets. They understand and are committed to our mission."

Todd Steffan, Veterans' First coordinator at Las Positas College who also helped organize the program, said the college provided the veterans with tutoring and book loan programs, and more than $40,000 in scholarships.

"They deserve everything," he said. "There are going to be many other veterans [interested in the program], and they deserve the same support as Logan, Jake and Chuck."

Aaron Ortiz, executive director of East Bay Community Services, said his organization is proud of helping fund the veterans program. He hopes Sandia National Laboratory will join the program in the future.

Bekker, 27, who served asa  Marine Corps corporal in Iraq, said he was initially apprehensive about the LLNL internship because the other student interns, who were not veterans, already had their college or graduate degrees. After completing the internship, he realized the skills he gained from the military -- intelligence, discipline and motivation -- made him extremely successful at the Lab.

"Everyone at the Lab has been welcoming and accepting of me," Bekker said. "I wouldn't trade my experience here for the world."

Jacob Akers, 31, who served as an Army sergeant, said he was fascinated with the technologies he was working on at the Lab.

"I was making things that will help change the future of soldiering," he said. "I worked on technologies that are absolutely being used on the battlefield. That is mind blowing."

Below are descriptions of the veterans' Lab research projects and education. Motivated by their experience at the Lab and Las Positas, all three said they plan continue their education into the graduate level.

After spending 2 1/2 years at Las Positas studying business administration, he plans to attend UC Berkeley in the fall to study finance and financial engineering. At the Lab, he worked at the Livermore Valley Open Campus (LVOC) under the Project Management Engineering and Construction Department (PMEC). He learned about third-party financing for building projects.

His mentor, Lee Philips, said Lattin performs well on tasks, reports on those tasks at high-level project meetings and has learned his way around LLNL as a self-starter.

"Chuck has proven to be a valuable asset to our team," Phillips said.

"I would very much embrace the opportunity to have Chuck be a part of our team here at LLNL, not only as a summer intern, but as an employee for LLNS."

He has completed two years at Las Positas as a mechanical engineering major. He worked at LLNL's Site 300 with the Weapons and Complex Integration (WCI) Principal Directorate at the Contained Firing Facility (CFF).

"My current project is an experimental test of an epoxy to fill in shrapnel marks on the floors and walls of the CFF," Bekker said.

Bill Daily from Site 300, who serves as Bekker's mentor, said that Logan is a fine example of a veteran and engineering student.

"It has been a pleasure to work with him," Daily said. "It's been quite a bonus to benefit from his vast experience in the military, his well developed interpersonal skills and his willingness to pitch in."

Bekker said he's learned that teamwork is essential for the success of any project.

"You may be the lead on a project, [but] having a second set of eyes is always beneficial to both you and the success of the project," he said.

He's in his second year at Las Positas as an electrical engineering major. As an intern in LLNL's National Security Engineering Division (NSED), Akers is working on a wireless protocol to help create a mesh network of motion sensors.

"These types of sensors with wireless capabilities have the potential to revolutionize our strategies on the battlefield and at home," he said.

His mentor, Jae Jeon, said that because of his extensive experience working with both mechanical and electrical systems in the military, Akers is able to grasp onto concepts easily. Akers' attitude and willingness to do work is refreshing and a great asset, Jeon said.

Until this internship, Akers had never considered graduate school. However, all the interactions with his mentor, staff and other interns, he is looking forward to pursuing an advanced degree.

All eyes on Kerrie Ingraham