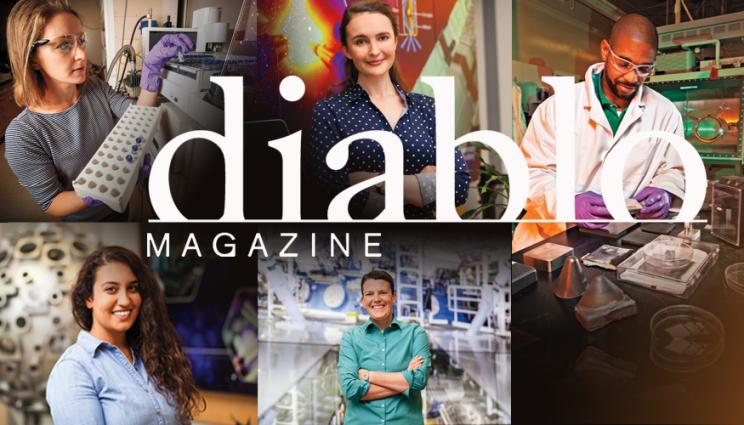 Diablo Magazine featured three Lawrence Livermore National Laboratory (LLNL) researchers in their 2016 "Forty Under Forty" issue. The annual list recognizes young professionals in the East Bay who are leading the charge in their fields.

Experimental physicist Tammy Ma was No. 3 on the list for her work developing and executing experiments aimed at creating sustained fusion at the National Ignition Facility (NIF). In February, Ma was selected for a 2016 Presidential Early Career Award for Science and Engineering (PECASE). The award is the highest honor bestowed by the United States government to science and engineering professionals beginning their research careers. Ma’s journey to LLNL began when she was young, coming to Science on Saturdays, the Lab's popular lecture series for students. She later became an intern between high school and college, completed a postdoc at LLNL and joined the Lab as a staff scientist in 2012.

"It is pretty cool to be included on such a list of diverse and inspiring individuals," Ma said. "It’s very much an honor to get to share this with Lisa and Monica."

"I am honored to have been nominated by LLNL and selected for Diablo magazine’s ‘Forty Under Forty’ list." Belk said. "I have been afforded many opportunities to grow my career at LLNL, and have truly enjoyed a breadth of assignments within the NIF & Photon Science, Global Security and Computation directorates."

Research engineer Monica Moya, No. 37, is the principal investigator for a project that uses 3D printing to create tubes made from human cells and biomaterial that guide small blood vessel development. The project is in conjunction with iCHIP (in-vitro Chip-based Human Investigational Platform), which reproduces the heart, central nervous system, peripheral nervous system and the blood-brain barrier that filters blood before reaching the brain. The team looks to use it as a way of predicting the body’s response to chemical agents without testing on animals or humans.

This year’s list of "Forty Under Forty" spans orchestra conductors to district attorneys from Oakland to Livermore.