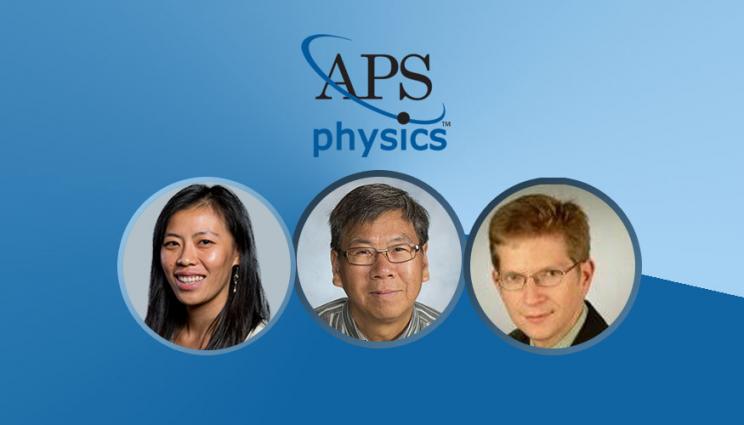 APS fellowships are awarded after extensive review and are considered a distinct honor because the evaluation process, conducted by the fellowship committees of individual divisions, topical groups and forums, relies on nomination and recommendation by one’s professional peers.

“I am incredibly honored and grateful to be selected as an APS fellow,” he said. “It is humbling to be recognized by my peers in the plasma physics community, I am very thankful to a lot of people who have supported and mentored me throughout my career, to my collaborators and to many of my colleagues at the Lab with whom I am incredibly lucky to work with.”

Doeppner started his career at the Lab as postdoc in 2007. He fields experiments at the NIF, where he has worked on a wide range of topics and projects over the years. He currently is leading projects in the ICF program, for the Plasma equation of state (EOS) group, and is supporting external users to pursue “Discovery Science” at the NIF. He is specifically interested in developing and improving X-ray diagnostics for plasmas at extreme conditions like X-ray scattering, radiography of spherically converging shock waves and hard X-ray imaging.

Future endeavors include pursuing ICF and HED science. “Thanks to the unique capabilities provided by the NIF,” Doeppner said. “ I am currently developing refractive enhanced radiography with 1 micron spatial resolution to measure plasma transport properties like thermal conductivity and diffusivity.”

Tammy Ma, a physicist in the High Energy Density Division of the NIF and Photon Science Directorate (NIF&PS), was selected for “outstanding scientific contributions and leadership in the field of intense laser-matter interactions and inertial fusion energy science”

“I’m grateful to LLNL for all the opportunities, support and great working relationships,” Ma said. “I’m honored to receive this alongside Tilo and Xu.”

As an 11-year LLNL scientist, Ma has made a name for herself in laser-based research. Within the Advanced Photon Technologies (APT) Program within NIF&PS, her team is working on high-intensity short-pulse laser-based research, with a focus on establishing new applications of these tools to support future National Nuclear Security Administration (NNSA) and Department of Energy (DOE) missions.  They are working to bring up the capabilities of high-repetition-rate HED science, utilizing some of the frontier new lasers that are just now coming online.

For her future endeavors, Ma is pushing to re-establish an Inertial Fusion Energy (IFE) program in the U.S. “LLNL has an important leadership role to play in this with our recent game-changing results on the NIF, and our ample expertise in powerful lasers, targets, diagnostics, codes, designs, systems engineering and high repetition rate technologies,” she said.

Xueqiao Xu, a physicist in the Physics Division of the Physical and Life Sciences Directorate, was cited for “wide-ranging contributions to the understanding of the tokamak edge, including edge pedestal stability and the onset and evolution of edge localized modes and for leading the development of edge simulation models and codes.

“It is a great honor to be recognized as a fellow of the American Physical Society,” Xu said. “I feel very proud, and I am most grateful to those nominating me and awarding me with such distinction.”

Xu has been at the Lab for 28 years and his research focuses on theory and simulations of boundary plasma turbulence and transport for physics research of magnetic fusion energy, such as ITER (International Thermonuclear Experimental Reactor).

In the past 20 years, he has developed and co-developed various plasma physics codes, such as the three-dimensional two-fluid BOUT code, the two-fluid and Gyro-Landau-Fluid code BOUT++ code, the four- and five-dimensional kinetic code TEMPEST. In addition, he also is leading an international collaboration for ongoing development of the BOUT++ code and its applications to simulate plasma turbulence and transient events in Tokamak edge plasmas, such as disruption and edge-localize-modes, with collaborative groups from the U.S., United Kingdom, China, Japan and South Korea, where the majority of the researchers are Ph.D. students, postdocs and early-career researchers.

As for the future, Xu plans to work on next generation of large-scale experimental facilities for magnetic fusion energy and future fusion power plants, reliably managing the copious high fluxes of exhaust plasma particles and energy that travel along the magnetic field lines to plasma-facing components in plasma boundary will be critical for fusion reactor safety. His team is working on the development of integrated simulation capabilities to understand the physics of particle and energy fluxes under various conditions, such as under steady-state operations and under off-normal events, such as plasma disruptions and edge-localize-modes.