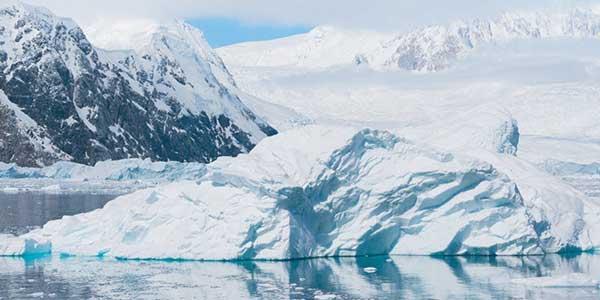 Researchers have found that thinning and retreat of the Pine Island Glacier was triggered in the 1940s.

New research by an international team shows that the present thinning and retreat of Pine Island Glacier in West Antarctica is part of a climatically forced trend that was triggered in the 1940s.

The team -- made up of scientists from Lawrence Livermore National Laboratory, the British Antarctic Survey, University of Copenhagen, University of Alaska, Naval Postgraduate School, NASA Goddard Space Flight Center, Lamont-Doherty Earth Observatory of Columbia University, University of Leipzig, University of Geneva and University of Cambridge -- analyzed sediment cores recovered beneath the floating Pine Island Glacier ice shelf. The team concluded the date at which the grounding line retreated from a prominent seafloor ridge was in 1945 at the latest.

The team also found that final ungrounding of the ice shelf from the ridge occurred in 1970.

"Our results suggest that, even when climate forcing (such as El Niños, which create warmer water) weakened, ice-sheet retreat continued," said James Smith of the British Antarctic Survey and lead author of an article appearing in the Nov. 23 issue of the journal Nature.

The West Antarctic ice sheet is one of the largest potential sources of water that will contribute to rising sea levels. Over the past 40 years, glaciers flowing into the Amundsen Sea sector of the ice sheet have thinned at an accelerating rate, and several numerical models suggest that unstable and irreversible retreat of the grounding line -- which marks the boundary between grounded ice and floating ice shelf -- is underway. Understanding this recent retreat requires a detailed knowledge of grounding-line history, but the locations of the grounding line before the advent of satellite monitoring in the 1990s are poorly dated.

Pine Island Glacier, which drains into the Amundsen Sea, has retreated continuously throughout the short period for which there are observational records (from 1992 to the present). The coherent thinning of this and other glaciers along the Amundsen Sea coast indicates a response to external forcing and has been attributed to high basal melting of the floating ice shelves by warm circumpolar deep water. Thinner ice shelves are less able to buttress inland ice, leading to glacier acceleration and ice-sheet thinning.

Evidence gathered by Autosub, an autonomous underwater vehicle operating beneath the ice shelf of Pine Island Glacier, revealed a prominent sea-floor ridge that probably acted as the most recent steady grounding-line position. The earliest visible satellite image, from 1973, showed a bump on the ice surface that was interpreted as the last point of grounding on the highest part of the ridge. The bump had disappeared several years later, suggesting that the present phase of thinning was already underway.

"This finding provided the first hint that the recent retreat could be part of a longer-term process that started decades or even centuries before satellite observations became available," Smith said.

For the study, the team drilled three 20-centimeter holes through the Pine Island Glacier ice shelf during December 2012 and January 2013 to access the ocean cavity below. Sediment cores were recovered at each site. Changes in the lithology and composition of sediment deposited beneath the glacier record the transition from grounded glacier to freely floating ice.

"Despite a return to pre-1940s climatic conditions in the ensuing decades, thinning and glacier retreat has not stopped and is unlikely to be reversible without a major change in marine or glaciological conditions," Smith said. "A period of warming in the Antarctic shelf waters triggered a substantial change in the ice sheet, via the mechanism that we see today -- that is, ocean-driven thinning and retreat of ice shelves leads to inland glacier acceleration and ice-sheet thinning."

Nature
British Antarctic Survey
Current ice melt rate in Pine Island Glacier may go on for decades
Consequences of today's carbon emissions will linger for thousands of years, st…
Lab researchers find that humans are cause of diminishing water flow in the West