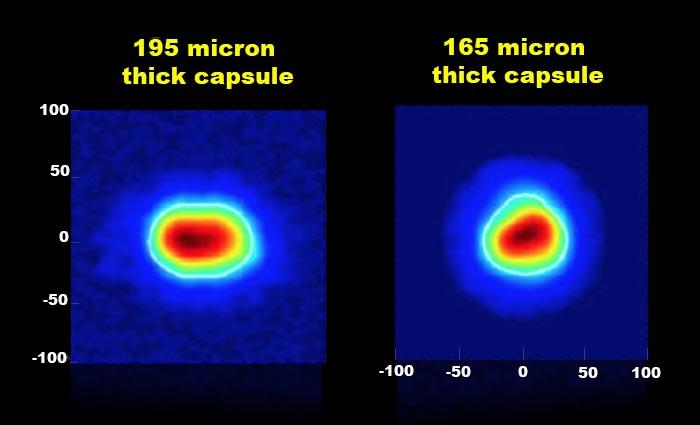 In National Ignition Facility (NIF) inertial confinement fusion (ICF) experiments, the fusion fuel implodes at a high speed in reaction to the rapid ablation, or blow-off, of the outer layers of the target capsule. To reach the conditions needed for ignition, the fuel must implode symmetrically at a peak velocity of about 350 kilometers per second— without producing hydrodynamic instabilities that can dampen the fusion reactions.

To address this challenge, NIF researchers have been testing target capsules that are 10 to 15 percent thinner than normal. The experiments aim to determine if the thinner capsules can produce higher-velocity implosions with better symmetry than the capsules used in previous experiments.

The thinner capsules are 175 and 165 microns (millionths of a meter) thick — 10 percent and 15 percent thinner than the capsules previously used in the recent high-foot (high initial laser pulse) experiments that produced record neutron yields. The thin-capsule implosions have demonstrated good performance, with higher velocity and better symmetry control at lower laser powers and energies than their nominal-thickness counterparts.

"Little to no hydrodynamic mix of ablator material into the capsule hot spot was observed" in the first experiments in the thin-shell series, said NIF and Photon Science physicist Tammy Ma. "This was despite the higher velocities and reduced depth that could lead to possible feed-through of instabilities that grow at the ablation front and penetrate into the fuel. Early results have shown good repeatability, with up to half of the neutron yield coming from alpha-particle self-heating." (Self-heating is the process in which the alpha particles created by the fusion reactions in the implosion hot spot are absorbed by and further heat the compressed fuel, enhancing the yield.)

In a Physical Review Letters paper published online on April 6, Ma and her colleagues reported on the results of three thin-capsule shots representing three different ablator thicknesses using roughly the same laser peak power; higher neutron yield and inferred hot-spot pressure were achieved with each of the progressively thinner capsules. "This can be attributed to the gain in velocity due to the thinner ablator," Ma said. "Further, images of the imploded hot spot show that thinner ablators provide better shape control."

Ma was joined on the paper by LLNL colleagues and collaborators from the Laboratory for Laser Energetics at the University of Rochester, the Massachusetts Institute of Technology Plasma Science and Fusion Center, Los Alamos National Laboratory, and General Atomics.