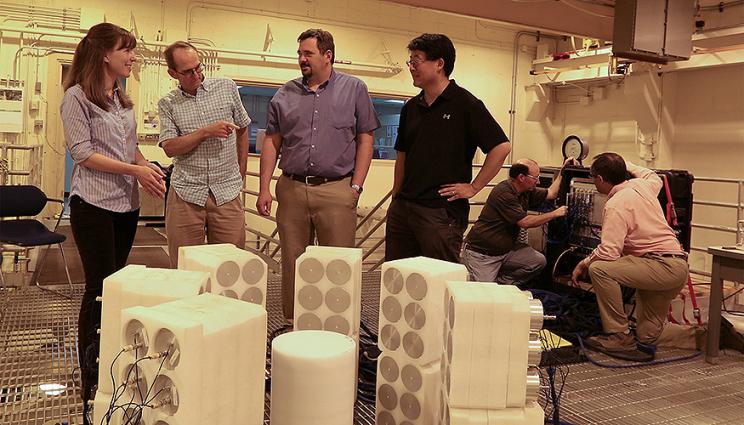 A team of LLNL researchers has developed powerful new tools that enable them to detect and assess if unknown objects might contain nuclear materials. Shown in the foreground from left to right are Lab researchers Bonnie Canion, Ron Wurtz, Andrew Glenn and Kenneth Kim. In the background, from left to right, are Phil Kerr and Jerome Verbeke. Photo by Julie Russell

Nuclear emergency teams, safeguards specialists and others may one day benefit from an expanded nuclear fission chain theory and detectors developed by a team of Lawrence Livermore Nationla Laboratory (LLNL) physicists.

The Livermore scientists have bolstered their theory for understanding nuclear fission chains --  a cascade of atomic nuclei splitting, each initiated by a neutron -- over time as a method to analyze nuclear materials.

By combining their new theory and special detectors, the researchers have developed powerful new tools that enable them to detect and assess if unknown objects might contain nuclear materials.

Their work allows the real-time analysis of nuclear materials and devices – plus the assessment of their configurations – by neutron and gamma-ray counting methods.

These tools are useful in a wide range of applications, including arms control and border security.

Much of the team’s theory was offered in a 2015 Nuclear Science and Engineering journal article, wherein they described how fission chains act over time within fissile materials. They also described the burst timing pattern of neutrons and gamma rays emitted by fission chains in HEU and plutonium.

In fission, neutrons and gamma rays are emitted in bursts rather than singly and fission chains result when the emitted neutrons cause additional fission events in the fissionable material, amplifying the burst effect.

After the team published its theory and continued its experiments, "we saw some of the effects of moderators and reflectors and we knew we needed to refine our theory to explain these effects," said LLNL mathematical physicist Kenneth Kim.

Moderators, which are materials such as high explosives and heavy water, slow the movement of the neutrons, while reflectors, metals like lead and beryllium, permit the neutrons to bounce back to their original location.

"With our theory, we can resolve neutron and gamma ray correlations occurring at nanosecond (billionth of a second) time scales, and scattering processes happening at the longer microsecond time scales," Kim said. "With this information, we can then infer the geometric configuration of the nuclear materials and its surroundings."

LLNL’s Les Nakae, an experimental physicist and team leader, said his team’s theory "not only describes the time-evolution of the fission chains within fissile materials, but also includes the important effects of the moderators and reflectors surrounding them."

Nakae lauded the theory development work of Kim and theoretical physicists Neal Snyderman and Manoj Prasad, saying: "I don’t think there’s any other group in the world who could have advanced this theory and would know how to apply it to the practical measurement problem for nanosecond neutron and gamma ray counting. Only LLNL has this capability."

Beyond their theoretical work, the team also has been developing a liquid scintillator array – that lights up in the presence of ionizing radiation – and is capable of counting neutrons and gamma rays with billionth of a second timing. This array has allowed them to test their theory complete with multiple time scales, since neutrons can propagate through various materials at different speeds.

A fourth-generation instrument, the team’s newest liquid scintillator array (LSA) is about three feet wide by three-and-half-feet tall, uses mineral oil and was built last year.  It is expected to be used to conduct measurements on weapons from the U.S. nuclear stockpile in July at Pantex.

"Our newer generations of the LSA are in the process of being taken out of the laboratory and being used in real-world field conditions. We want to determine what the best materials and packages are to use in the field," Nakae noted, adding they could use crystals and/or plastic radiation detection technologies developed by other LLNL scientists.

To make their instrument available for field work, the team is seeking to make it rugged, and capable of working under different weather conditions. The researchers also are working to make it operable by non-experts after months of sitting idle, and to have automated data processing.

"What we’re doing is we are adapting our algorithms and our techniques to make them more robust, so we can take our systems into the field," Nakae explained. "Our hope is that someday our field instruments will have the same capabilities as our lab instruments have already demonstrated."

The nuclear fission theory and LSA instrument can be used in safeguards and treaty verification work. It can determine whether fissile material is present in a nuclear warhead and the mass of the fissile material.

"The technology can help us determine whether an unknown device is a nuclear weapon and a threat, or not a threat," Nakae said.

Their work is funded by the National Nuclear Security Administration’s Office of Defense Nuclear Nonproliferation Research and Development.