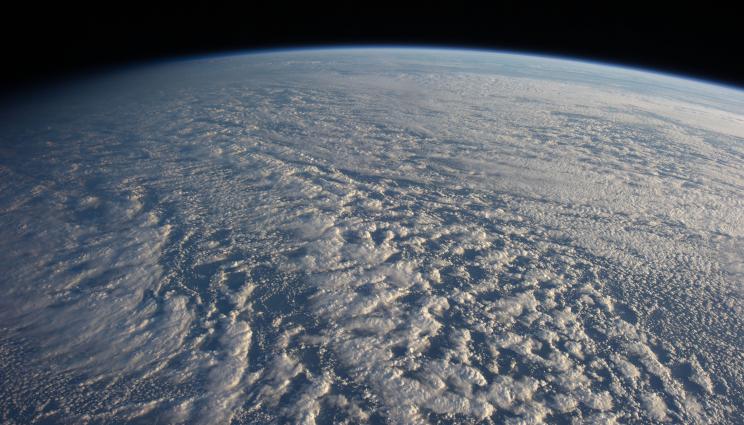 Stratocumulus clouds like these seen from the International Space Station are ubiquitous across the global oceans, reflecting sunlight and keeping Earth cooler than it would otherwise be. Global climate models predict that their ability to shade the Earth weakens with global warming — an amplifying feedback, and one that has strengthened in the latest models. Image courtesy of NASA

Thanks to clouds, latest climate models predict more global warming than their predecessors

Researchers at Lawrence Livermore National Laboratory (LLNL) in collaboration with colleagues from the University of Leeds and Imperial College London have found that the latest generation of global climate models predict more warming in response to increasing carbon dioxide than their predecessors.

These refined models represent aspects of Earth’s climate better than previous models, suggesting that these warmer predictions may be more realistic, but more study is needed to establish their reliability. The research appears in the current issue of Geophysical Research Letters.

The researchers analyzed the climate response to an abrupt increase of carbon dioxide in a collection of nearly 30 climate models from around the world. Rather than trying to simulate plausible emissions scenarios, these idealized experiments are designed for easily diagnosing climate sensitivity — the global warming that occurs from a doubling of atmospheric carbon dioxide. The latest models have wide-ranging sensitivities, but taken as a whole, they warm more than their predecessors by about 0.5˚Celsius (0.9˚Fahrenheit). Many of them now have sensitivities exceeding 4.5˚C (8.1˚F), which is outside the range previously deemed "likely" by the United Nations Intergovernmental Panel on Climate Change (1.5 - 4.5˚C, or 2.7 – 8.1˚F).

The primary culprits for the increased warming, the team discovered, were clouds.

“Clouds are Earth’s sunscreen, reflecting away sunlight and keeping the planet cooler than it would otherwise be,” explained Mark Zelinka, LLNL climate scientist and lead author of the study.

If global warming leads to fewer or thinner clouds, it causes additional warming above and beyond that coming from carbon dioxide alone. In other words, an amplifying feedback to warming occurs. It is this amplifying cloud feedback that has strengthened in the latest models, according to the study. “These models are shedding their protective sunscreen in dramatic fashion, so they warm more in response to increasing carbon dioxide than their predecessors,” Zelinka said.

An important question is whether these latest models are more trustworthy. “These latest highly sensitive models are very sophisticated and state-of-the-art,” said Tim Myers, LLNL co-author of the paper. “We take them seriously, but we also need to examine them closely to figure out if their predictions are plausible.”

At least one aspect of the latest models has improved: their mix of liquid droplets and ice crystals in clouds. For years, models have failed to match observations in maintaining abundant liquid water at temperatures well below freezing. But the latest models are keeping more cloud water in this “super-cooled” liquid phase, an improvement that has previously been shown to increase climate sensitivity.

“The improvement in cloud phase is part of the story, at least for some models,” Zelinka said. “Taken alone, this improvement suggests that these highly sensitive models are giving us a more realistic view of future warming.”

But the researchers warn that a broader view is needed.  “Some of the high sensitivity models have difficulty matching the observed global warming rate over the last few decades,” added Stephen Po-Chedley, another LLNL co-author. “This might indicate that they are too sensitive to carbon dioxide increases. And, it remains to be established whether by improving certain aspects of the models, other imperfections have been introduced or unmasked.”

Moving forward, scientists will continue to evaluate these latest models to shine a light on where they have improved and where they remain deficient. Zelinka added, “Only after fully vetting these models against the best available observations can we start making conclusions about whether we have more warming in store than we had originally thought.”

Other LLNL researchers include Peter Caldwell, Stephen Klein and Karl Taylor. LLNL scientists collaborated with Daniel McCoy at the University of Leeds and Paulo Ceppi at Imperial College London. Work at LLNL was funded by the DOE’s Regional and Global Model Analysis Program and LLNL’s Laboratory Directed Research and Development program.