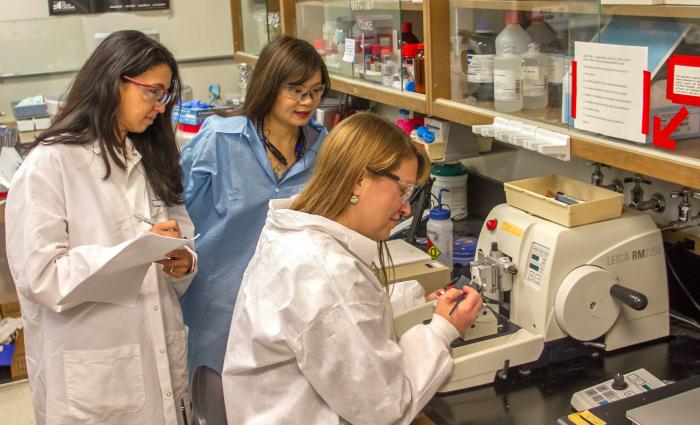 New identification of a gene involved in the fracture healing process could lead to the development of new therapeutic treatments for difficult-to-heal injuries.

Fracture healing involves communication between bone, muscle, vasculature and the thin membrane covering the outer surface of bones (periosteum) during the fracture repair. The periosteum contains stem cells that migrate to the fracture site and differentiate into chondrocytes (cartilage-forming cells) and/or osteoblasts (bone-forming cells).

However, little is known about the interaction between the periosteum stem cells and the bone cells during fracture healing. A team of scientists from Lawrence Livermore National Laboratory, University of California, Merced and Davis, Indiana University and Regeneron Pharmaceuticals has identified the "Sostdc1" gene as a regulator of periosteum stem cells activity during fracture repair. The research appears in the April 19 edition of the journal, Bone.

The study suggests that Sostdc1 has an important role during stem cell self-renewal and differentiation, which may be useful for developing novel therapeutics for difficult-to-heal fractures.

There are two general types of bone material: cortical bone, which is the dense, hard, outer shell of most bones; and trabecular bone, which is the "spongy" form of bone found at the ends of long bones, near joints and inside vertebrae.

The study showed that mutant mice lacking the Sostdc1 gene, despite having a lower trabecular bone density, had thicker, denser, cortical bone, which healed at an accelerated rate relative to their genetically normal counterparts when fractured. Furthermore, the team was able to show that suppression of the Sostdc1 gene induces a population of stem cells to rapidly expand and invade the fracture to contribute to the repair process.

The Sostdc1 gene has been studied in the context of tooth development, kidney disease, cancer progression, hair follicle formation and embryo implantation.

"This work describes Sostdc1 activity in a new context, highlighting its potential role in the metabolism and repair of the skeleton," said Gaby Loots, an LLNL biologist and senior author of the article. "For the first time, we have linked Sostdc1 to the behavior of stem cells, which is consistent with, and mechanistically may explain, Sostdc1-related characteristics as noted by other studies, such as in cancer prognosis, tooth development, kidney injury resistance and diet-induced obesity resistance."

The study shows that Sostdc1 is important for trabecular bone maintenance, bone formation, early fracture repair events and the lack of Sostdc1 influences stem cell behavior in response to injury.

"Future studies may allow us to harness the behavior of these stem cells in other parts of the body where they may do even more good," said Nicole Collette, an LLNL biologist and first author of the study. "This regulator is expressed all over the body, including in other tissues where stem cells are found."