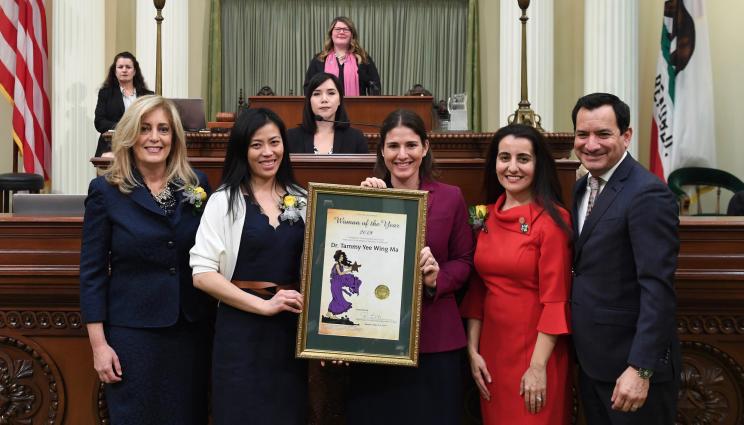 Tammy Ma, an experimental plasma physicist at Lawrence Livermore National Laboratory (LLNL), has been named Woman of the Year for the 16th Assembly District by Assemblymember Rebecca Bauer-Kahan.

"I am extremely pleased to announce Dr. Tammy Ma as my Woman of the Year for Assembly District 16.  A Pleasanton resident and first-generation American, Dr. Ma is strongly committed to education and to mentoring and encouraging young students who share her passion for science. I congratulate her on this much-deserved award," Bauer-Kahan said. "I am proud to highlight her accomplishments and lift up a woman in science."

The annual Woman of the Year event, founded in 1987, is sponsored and organized by the California Legislative Women’s Caucus as a way to highlight women who make important contributions to society.

"This was a completely unexpected, and completely undeserved honor," Ma said. "I’m doing what I love, and I just happen to be very passionate about STEM education and growing the level of science literacy across society. It was seriously a humbling experience to be among so many amazing women both representing us in the Assembly and among the other awardees who contribute so much to California — I am inspired to do more for the community."

Ma earned her bachelor's degree in aerospace engineering from Caltech in 2005 and received her master's degree in 2008 and Ph.D. in 2010, both from the University of California, San Diego. Following graduate school, she completed a postdoc at LLNL before becoming a staff scientist in 2012.

Ma serves as chair of the Lab-Wide Laboratory Directed Research and Development Program, and also as the X-Ray Analysis Group lead for LLNL’s Inertial Confinement Fusion Program at the National Ignition Facility. She has authored or co-authored more than 150 peer-reviewed journal publications and has been recognized with the Stix Award for Outstanding Early Career Contributions to Plasma Research by the American Physical Society and the Presidential Early Career Award for Science and Engineering, the highest honor bestowed by the U.S. government on science and engineering professionals in the early stages of their independent research careers.

In addition, she is a member of the Fusion Energy Sciences Advisory Committee, advising the Department of Energy’s Office of Science on complex scientific and technological issues related to fusion energy and plasma research, and is one of 40 early career scientists worldwide appointed to a two-year term as a Young Scientist of the World Economic Forum.