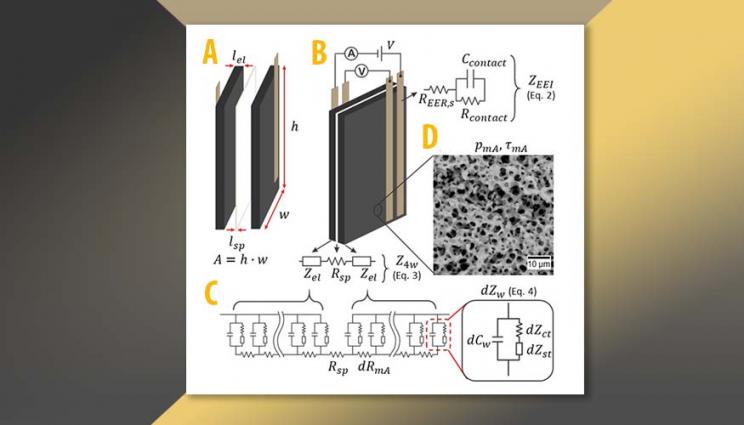 Schematic of a CDI cell and its equivalent-circuit break down.

Capacitive deionization (CDI) is an emerging class of water desalination technologies that use cyclic charging and discharging of electrodes to reduce or enrich the salinity of incoming water.

The desalination characteristics of CDI are strongly influenced by the resistive components of the system. To better understand this process, a team of Lawrence Livermore National Laboratory (LLNL) scientists have provided a comprehensive practical overview of a CDI cell's resistive components both experimentally and theoretically that sheds light on this complicated cell-resistance picture. Two of the authors — including the lead author — were undergraduate summer students.

“We detailed new methods for separating the impact of contact vs. electrode effects as well as provide an explanation of poorly understood impedance features,” said Helen Kuo, an LLNL Materials and Chemistry Institute summer student and lead author of a paper appearing in in the journal Environmental Research: Water Research & Technology. “These measurements help us better understand the interface between current collectors and electrodes as well as the internal capacitive and resistive elements of the cell.”

CDI is a technology to deionize water by applying an electrical potential difference over two electrodes, which are often made of porous carbon. For desalination applications, salt ions are removed from the water stored in the polarized electrodes and later discharged to release the ions into a concentrate stream.

Interest in CDI has grown substantially in recent years, with hundreds of publications annually exploring new materials and device structures. The desalination performance of a given electrode/device configuration is significantly impacted by the cell’s overall resistance, which in turn is determined by several factors ranging from the external contact quality to electrosorption into sub-nanometer pores.

The team was able to lay out a framework with theory and experiment for how to decouple and rank the deficiencies of a given cell design in terms of electrical resistance. In doing so, they addressed a long-standing mystery in interpreting impedance measurements in porous electrochemical systems, presented a novel way to characterize current-collector degradation, and identified the top limitations of their own cell design. LLNL scientist and co-author Steven Hawks said the talent and productivity of the undergraduate students were key to the project’s success.

The work has significant implications for scale-up of CDI systems and future improvements of cell design. “Since the system resistances influence both the salt removal rate and energy consumption, it is a critically important aspect to understand and optimize,” said Hawks.

Other LLNL researchers include Diego Oyarzun, Erica Clevenger, Michael Stadermann and Patrick Campbell as well as scientists from Stanford University. The work was funded by LLNL’s Laboratory Directed Research and Development program and a grant from the California Energy Commission.