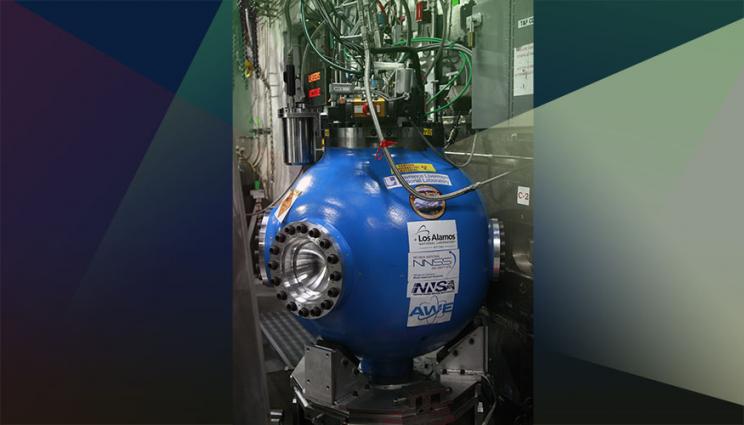 Subcritical experiments allow researchers to study how nuclear materials react to high explosives without conducting a traditional nuclear test. The contained experiments are specifically designed to make sure they remain below the threshold of criticality. In the case of Ediza, researchers used high explosives to implode plutonium, capturing numerous, detailed scientific measurements that will will be compared with supercomputer simulations.

"We are advancing safety science with this subcritical experiment," said Barbara Kornblum, LLNL’s lead design physicist on the experimental series. "Ediza is the first experiment of its kind, and it provides us with unique plutonium data."

As the plutonium imploded, researchers were able to capture high-quality radiographic images relevant to stockpile safety. These images are similar to X-ray images taken by a dentist, but are more than a thousand times more powerful than a dental X-ray. Those radiographs and data from other diagnostics will be compared with supercomputer simulations that predicted the implosion. Comparing those simulations with the experimental data allows scientists to improve the physics models, enabling more realistic simulations and, ultimately, more confidence when assessing stockpile safety.

Ediza was the final experiment in the "Sierra Nevada" series, which was a tri-lab collaboration between LLNL and its counterparts at Los Alamos National Laboratory (LANL) and the UK’s Atomic Weapons Establishment, with support and scientific collaboration from the NNSS. LLNL researchers worked closely with these collaborators, connecting weekly via teleconference over the five-year Sierra Nevada campaign, and daily with the combined NNSS team during Ediza experimental activities.

"Each experiment generated useful physics data, but Livermore doesn’t do ‘subcrits’ to study high explosives," said LLNL physicist Reed Patterson, experimental team leader. "This experiment was all about answering questions about plutonium. In the end, we captured some exquisite data, and it will go a long way to improve the physics models we use to underwrite nuclear weapon safety."

Each year, LLNL and LANL are responsible for assessing the U.S. nuclear stockpile to ensure the warheads always will perform as intended. This approach is known as stockpile stewardship. In the absence of conducting traditional nuclear tests, a science-based methodology is employed whereby a virtual testing ground is simulated with computer models. For this to work with confidence, the simulations are validated against real experimental data both from historical nuclear tests that produced nuclear yield and from modern subcritical experiments like Ediza.

This experiment will provide increased confidence in these annual assessments, make sure the safety of nuclear systems remains robust and also enable researchers to enhance safety, where possible, as they work to extend the life of the stockpile.