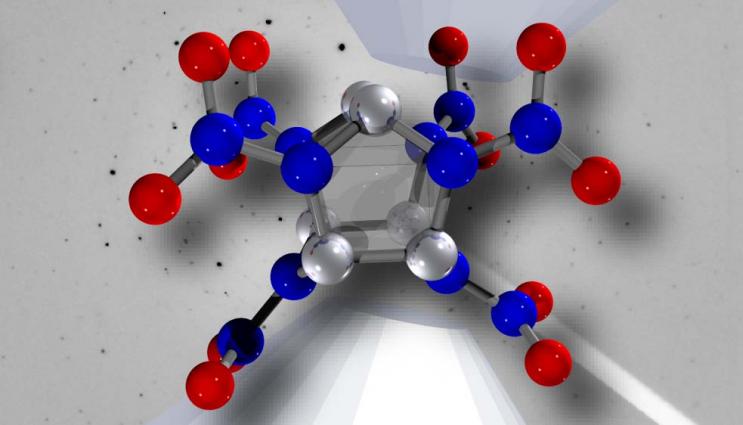 Understanding the physical and chemical characteristics of energetic materials under extreme conditions is crucial for their safe and efficient use. High-pressure phase transitions in such materials can cause significant changes in their initiation properties and detonation performance necessitating detailed structural studies.

The high-pressure structural evolution of CL-20 is of particular interest due to its high energy density content, which opens it to be an important material in future applications. However, previous experimental work only determined the equation of state up to approximately 7 GPa (70,000 atmospheres of pressure).

Researchers from LLNL have investigated the ambient-temperature high-pressure phase stability of ε-CL-20 — the most stable and highest density polymorph, to pressures five times as high as previously done using synchrotron powder X-ray diffraction.

Lead author of the research, Samantha Clarke, explains "by using the high flux available at modern synchrotron sources, we are able to probe ε-CL-20 to much higher pressures and find that the ambient phase remains stable upon compression to the highest pressure reached."

The diffraction experiments were performed at the HPCAT beamline at the Advanced Photon Source, Argonne National Laboratory. The research appears in JANNAF Journal of Propulsion and Energetics.

An intriguing finding of the project was that the compressibility of each of the axes is similar over the entire pressure range, unlike many other energetic compounds; this was attributed to the cage-like structure of the molecule. The team determined experimental equation of state parameters from the diffraction data, which match extremely well with the calculated values. Group leader Richard Gee led density functional theory calculations and said: "The excellent agreement between the experimental and modelled data highlights the strength of such combined efforts."

The results of this study enable more accurate safety and performance modeling of this material and its formulations. Clarke and Gee were joined on the publication by I-Feng Kuo, Joseph Zaug, Sorin Bastea, Ana Racoveanu, Keith Coffee and Elissaios Stavrou.