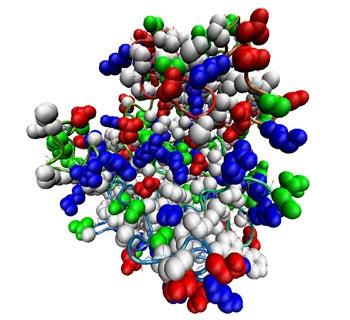 Mutations in the fibroblast growth factor receptor 3 (FGFR 3) gene (above) have been linked to achondroplasia, or dwarfism. Sperm analysis shows that mutations associated with dwarfism gradually increased by about two per cent for every year of age. 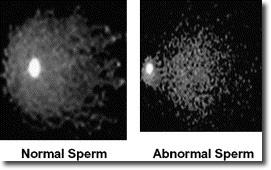 Sperm DNA fragmentation is associated with increased risk of infertility.

New research indicates that the genetic quality of sperm worsens as men get older, increasing a man’s risk of being infertile, fathering unsuccessful pregnancies and passing along dwarfism and possibly other genetic diseases to his children.

A study led by scientists at Lawrence Livermore National Laboratory (LLNL) and the University of California, Berkeley, found a steady increase in sperm DNA fragmentation with increasing age of the study participants, along with increases in a gene mutation that causes achondroplasia, or dwarfism. The first changes were observed in men in their early reproductive years.

Earlier research by the same team indicated that male reproductive ability gradually worsens with age, as sperm counts decline and the sperm lose motility and their ability to swim in a straight line. In the current study, the researchers analyzed DNA damage, chromosomal abnormalities and gene mutations in semen samples from the same subjects – 97 healthy, non-smoking LLNL employees and retirees between 22 and 80 years old – and found that sperm motility showed a high correlation with DNA fragmentation, which is associated with increased risk of infertility and a reduced probability of fathering a successful pregnancy.

The study, “Advancing age has differential effects on DNA damage, chromatin integrity, gene mutations, and aneuploidies (chromosome abnormalities) in sperm,” appears this week in the online edition of the Proceedings of the National Academy of Sciences.

“This study shows that men who wait until they’re older to have children are not only risking difficulties conceiving, they could also be increasing the risk of having children with genetic problems,” said co-lead author Andrew Wyrobek of LLNL.

“We know that women have a biological time clock,” said co-lead author Brenda Eskenazi of UC Berkeley’s School of Public Health, “with an increase in risk of miscarriage and producing children with trisomy (an extra chromosome, such as in Down’s syndrome) as women age, and with a seemingly abrupt end of fertility around perimenopause. Our research suggests that men, too, have a biological time clock – only it is different. Men seem to have a gradual rather than an abrupt change in fertility and in the potential ability to produce viable healthy offspring.”

Unlike in women, the researchers found no correlation between male aging and chromosome changes that cause Down’s syndrome and other forms of trisomies – such as Klinefelter syndrome, Turner syndrome, triple X syndrome, and XYY in offspring – that are associated with varying types and severity of infertility as well as physical and neurological abnormalities. They did conclude, however, that some older men could be at risk for fathering children with dwarfism, and that “a small fraction of men are at increased risks for transmitting multiple genetic and chromosomal defects.”

In the case of Apert syndrome, a serious disfiguring birth defect, the researchers found that the effects of advancing male age may differ among different groups of men. Apert syndrome gene mutations increased in the sperm of a second group of men recruited in the Baltimore inner city by researchers at Johns Hopkins Medical Center, while no age effects were observed in the group of men recruited in California.

Wyrobek noted that these differences in finding suggest that factors other than age may be involved, raising the possibility that socioeconomic or dietary factors or ethnic background may also be involved in how age affects the quality of human sperm.

“Since some forms of genomic damage change with age and others don’t,” he said, “overall genomic sperm quality cannot be measured by any single sperm test.”

Dwarfism, a genetic disorder that affects bone growth, is the most common growth-related birth defect, occurring in about one in every 25,000 births. It occurs in all races and in both males and females and causes affected individuals to have very short arms and legs, limiting their full adult height to about four feet.

Wyrobek, Eskenazi and their colleagues analyzed semen from the volunteers using a variety of state-of-the art methods for detecting genetic and chromosomal defects in human sperm. A flow cytometer method was used to detect DNA fragmentation and chromatin defects in collaboration with co-author Don Evenson at South Dakota State University. Gene mutations in the achrondroplasia gene and in the Apert sydrome gene were measured using highly sensitive PCR–based methods developed by co-authors Ethylin Jabs at Johns Hopkins and Norman Arnheim at USC in Los Angeles. The team also used a Livermore-developed chromosome analysis system called sperm FISH (fluorescence in-situ hybridization). They found a strong correlation between age and sperm DNA fragmentation, with genetic mutations associated with dwarfism gradually increasing by about two per cent for every year of age.

The study included at least 15 men from each age decade from 20 to 60 years, and 25 men 60 to 80 years old. The researchers gathered extensive medical, lifestyle and occupational exposure history from the men and excluded current cigarette smokers and men with current fertility or reproductive problems, a previous semen analysis with zero sperm count, vasectomy, history of prostate cancer or undescended testicle, or exposure to chemotherapy or radiation treatment for cancer.

Understanding the effects of paternal age has become more important as increasing numbers of men are having children at older ages. Since 1980 there has been about a 40 percent increase in 35- to 49-year-old men fathering children, and a 20 percent decrease in fathers under 30. Studies have also shown that it takes longer for older men to conceive, even when the age of the mother is considered.

Other authors of the study are Francesca Pearson from LLNL, Suzanne Young from UC Berkeley’s School of Public Health, Irene Tiemann-Boege from UCLA, and Rivka Glaser from Massachusetts College of Liberal Arts.