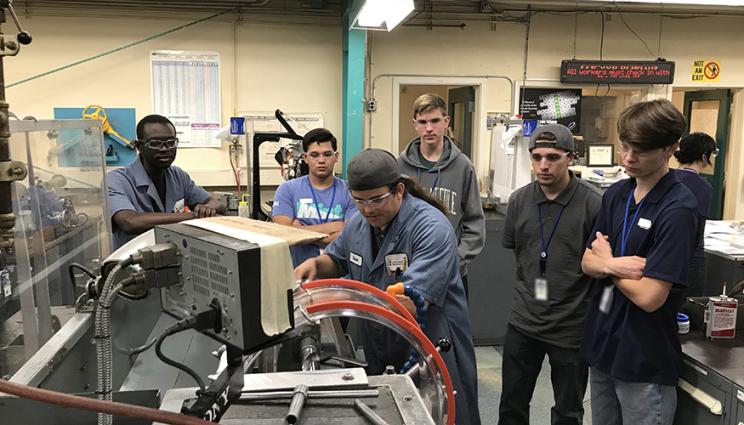 Bay Area students got an up-close look at the many milling and welding machines, lathes and precision tools used at Lawrence Livermore National Laboratory during a Manufacturing Workshop aimed specifically at high school students.

Students get a taste of Lab machinist work

Foothill High junior Lauren Graham has wanted to be an engineer since she took a class in eighth grade. Still undecided about her precise career path, she wants to expand her knowledge base and learn about all aspects of manufacturing.

After seeing the many milling and welding machines, lathes and precision tools used at Lawrence Livermore National Laboratory (LLNL), and learning about the processes and teamwork that go into making a part, Graham said she’s considering becoming a machinist.

"I never really thought about how they made parts before — I thought it was interesting that a lot of it was done by hand. It’s not just robots doing the same thing over and over. There’s more thought that goes into it," Graham said. "It made me understand how people are involved in the process. It really shows you how you can have any career you want. If you don’t like a specific part of engineering, there’s so many different sub-categories. It’s good to see your options."

Graham was one of 27 students from schools across the east San Francisco Bay Area and Central Valley who attended LLNL’s first-ever Manufacturing Workshop for high school students. During the workshop, which ran from July 9-11, the students got experience with the state-of-the-art tools and hardware used by Lab machinists and engineers, and learned from veteran machinists and graduates of the Lab’s Machinist Apprenticeship Program about how the machines work, the design-to-manufacturing process and the future of manufacturing through talks and interactive tours of the Lab’s manufacturing facilities.

The free workshop received overwhelming demand from local high schools, receiving nearly 80 applications from students to attend. LLNL Manufacturing Engineering Section Superintendent Pete Schoenenberger, who organized and led the workshop, said he was pleased to see the students interact with current LLNL machinist apprentices and have the opportunity to allow the students to witness real-life machining operations.

"On the tours they saw some things that they’ve probably never seen before and that’s exciting," Schoenenberger said. "I could see the wheels turning in their heads. That’s the whole idea behind this. Either spark some interest or maybe a week or month from now, they’ll make the connection."

Over their three days on site, the students were introduced to the Machinist Apprenticeship Program, one of the most highly regarded programs of its kind in the state. Many apprentices go on to secure full-time jobs at the Lab. Mike Prokosch, who started as an apprentice and became a machinist, then moved onto management and recently retired from LLNL as a section leader in manufacturing, serves on an advisory committee for local high schools and junior colleges.

He participated in the workshop, leading a tour of the Lab’s Bldg. 383 machine shop and presenting a talk on the importance of teamwork in manufacturing. Prokosch said he didn’t know what he wanted to be when he was in high school, and he hoped the workshop would raise the students’ awareness about manufacturing and stoke a passion for it at an earlier age.

"In hiring for the apprenticeship, we realized that a lot of students or potential apprentices were unaware of the pathway into the manufacturing trades," Prokosch said. "We recognized at the junior college level, where we were focusing, it was already too late, so we decided we needed to kick it down one level to the high schools and help juniors and seniors be more aware of the career pathway and the opportunities."

Many high schools don’t have machine shop class anymore due to liabilities and cost, Prokosch said. However, Livermore is fortunate to have two high schools with shops, at Livermore High and Granada High. Granada High School shop and machine tool teacher Don Danner, who serves with Schoenenberger on the local Machine Tool Technology Advisory Committee, encouraged his students to attend the workshop and had about five of his students who took advantage of it. He thought it would be a valuable experience, not just for his students, but for himself.

"When the students come through my class, they have tasks they need to do. Now suddenly, I think they can see how those tasks relate to the actual real world — they see that they have a background in this already and have a pretty good idea what’s going on," Danner said. "From a teacher side, I see they’re using a certain program here and I think I’ve chosen the right one to use because it ties in with what they’re using in the real world. After watching the demos I’m thinking, ‘I need to pull some of that for my class.’ So, I get something out of it, too."

Each day, the students enjoyed interactive "Lunch and Learn" panel presentations and sessions with Lab machinist apprentices. Jesus Gonzalez, who is in his third year of the Machinist Apprenticeship Program, said he attended a high school in Hayward that didn’t have a metal or machine shop. He felt the workshop could provide students from similar backgrounds to his gain exposure to machine work and inspire them to pursue the trade.

"I think it’s great that these young students are being shown that there are different trades out there in which they could use the skills they have. If I could’ve taken a workshop like this every year, I sure would’ve tried," Gonzalez said. "Also, promoting the educational opportunities after high school like this workshop is doing is another great thing. There’s a difference between what you do in a high school shop and what we do here at the Lab. Giving them just a little taste of that goes a long way."

Some students had a more challenging path to the workshop than others. Berkeley High School students Eliot Wachtel, Noah Dilworth and Erik Lovekin journeyed from Berkeley as a group, making the two-and-a-half-hour trip to Livermore via Bay Area Rapid Transit (BART) train, then city bus and finally by bicycle.

"I had seen ‘machining’ (in the flier) and I thought ‘Oh my gosh, I need to do this,’" said Wachtel, who is president of Berkeley High’s robotics club. Wachtel said he had used some of the machines and lathes before, during a summer workshop at Laney College, but was impressed with the scale of the Lab’s operations. "I really want to learn more about machining. I’m constantly looking for ways to learn more about the stuff I’m interested in, and I’m really interested in making stuff and in engineering. I definitely think I would enjoy a job like this."

Dilworth, who recently graduated from Berkeley High, is attending the University of California, San Diego for engineering beginning in the fall. He said his interest piqued because he wanted to see what kinds of careers exist in manufacturing.

"It’s been cool just to learn about the different jobs and how they’re interconnected," Dilworth said. "I don’t really know exactly what I want to do, but I know I like these machines, I like making things and finding out about how all these things work. I’m hoping to find out what I’m passionate about."

Jorja Burbano, a sophomore at Granada High, said she has family members who work at LLNL and had often thought about pursuing a career in manufacturing because she enjoys hands-on work. She was thrilled to visit the Lab’s Main Bay, where she gawked at the massive facility’s high-tech machines, such as the horizontal boring mill, engine lathe and hydropress.

"There’s a lot of new technology here and all the computer programming that goes into everything was mind blowing to see," Burbano said. "Everyone seems so passionate about their jobs here and are always experimenting; it doesn’t seem like anything gets old very fast. Working here would be great. This [workshop] was definitely worth it, and the time was greatly valued."

"The workshop far exceeded my expectations," Schoenenberger said. "The kids interacted well with each other and everyone involved. They were actively engaged in conversations with journeyman machinists as well as current apprentices while touring the Lab’s machine shops. It took a lot of people to make this event successful and to all of them I am very grateful." 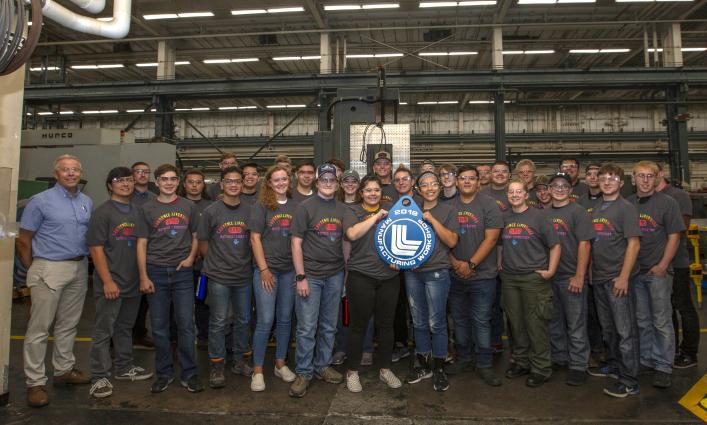