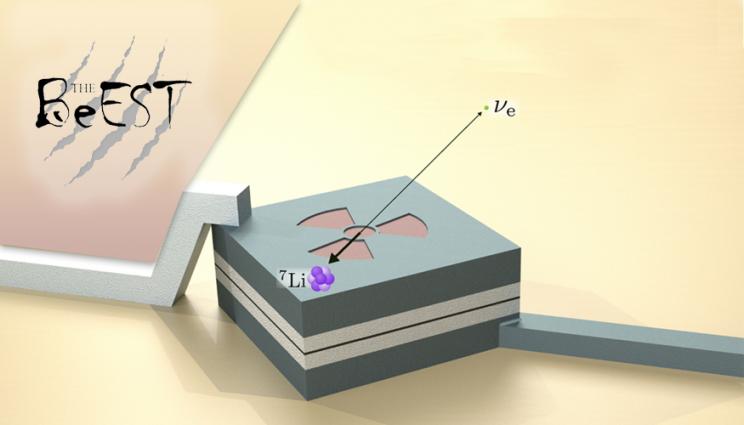 Schematic of the “BeEST” experiment. Radioactive beryllium-7 is implanted into the superconducting sensor. Precision measurements of the decay products could indicate the presence of hypothesized sterile neutrinos.

Sterile neutrinos may be portal to the dark side

“Sterile neutrinos” are theoretically predicted new particles that offer an intriguing possibility in the quest for understanding the dark matter in our universe.

Unlike the known “active” neutrinos in the Standard Model (SM) of particle physics, these sterile neutrinos do not interact with normal matter as they move through space, making them very difficult to detect.

A team of interdisciplinary researchers, led by Lawrence Livermore National Laboratory (LLNL) and the Colorado School of Mines, has demonstrated the power of using nuclear decay in high-rate quantum sensors in the search for sterile neutrinos. The findings are the first measurements of their kind.

The research has been featured recently as a DOE Office of Science Highlight and will jump-start an extended project to look for one of the most promising candidates for dark matter, the strange unidentified material that permeates the universe and accounts for 85 percent of its total mass.

The experiment involves implanting radioactive beryllium-7 atoms into superconducting sensors developed at LLNL and has been nicknamed the “BeEST” for “Beryllium Electron-capture with Superconducting Tunnel junctions.” When the beryllium-7 decays by electron capture into lithium-7 and a neutrino, the neutrino escapes from the sensor, but the recoil energy of the lithium-7 provides a measure of the neutrino mass. If a heavy sterile neutrino with mass mc2 were to be generated in a faction of the decays, the lithium-7 recoil energy would be reduced and produce a measurable signal, even though the elusive neutrino itself is not detected directly.

With a measurement time of just 28 days using a single sensor, the data excludes the existence of sterile neutrinos in the mass range of 100 to 850 kiloelectronvolts down to a 0.01 percent level of mixing with the active neutrinos — better than all previous decay experiments in this range. In addition, simulations on LLNL supercomputers have helped the team understand some of the materials effects in the detector that need to be accounted for to gain confidence in potential sterile neutrino detection events.

The SM of particle physics is one of the crowning achievements in modern science and the cornerstone of current subatomic studies. Despite its success, the SM is known to be incomplete, and physics beyond the Standard Model (BSM) is required to develop a full description of the universe. The neutrino sector offers an intriguing avenue for BSM physics as the observation of nonzero neutrino masses currently provides the only confirmed violation of the SM as it was originally constructed.

“Sterile neutrinos are exciting because they are strong candidates for so-called ‘warm’ dark matter, and they also may help to address the origin of the matter-antimatter asymmetry of the universe,” Friedrich said.

This research is funded by the Laboratory Directed Research and Development program.