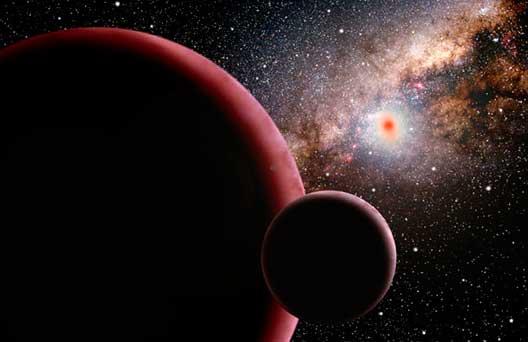 Artist's concept of the newfound 'super-Earth.' Image by David A. Aguilar/Harvard Smithsonian/Center for Astrophysics

By using a high-power laser to dynamically compress materials to high pressures, scientists have developed a new technique to identify phase transitions that may one day reveal the interior structure of "super Earth" planets.

Phase transition kinetics are the time-dependent changes that materials undergo when transforming from one structure to another, whether it's a gas, liquid, solid or plasma.

Using one beam of Livermore’s Janus laser, Raymond Smith of the Physical Sciences Directorate and colleagues launched a ramp-compression wave lasting several nanoseconds against a bismuth sample and measured the tell-tale signature of a structural phase transformation.

"These experiments represent, to our knowledge, the first time multiple-wave features associated with phase transformations have been observed under laser-driven compression," Smith said.

The results were staggering: The researchers noticed that at the ultra fast time scales of laser-driven ramp-wave-loading (RWL), the pressures associated with phase transformations in bismuth increased dramatically compared to previous slower experiments.

Bismuth is a heavy, brittle, white crystalline trivalent poor metal that has a pink tinge and chemically resembles arsenic and antimony. It is generally considered to be the last naturally occurring non-radioactive element on the periodic table.

These experiments test kinetic models and help scientists determine the required transition parameters for specific materials. In addition, the laser ramp platform will be used at pressures relevant to the interiors of recently discovered super Earth planets (~20 Mbar — one megabar equals one million atmospheres), which are several times larger than our own.

"We will use this technique to map out regions of structural phase space of materials within these planets," Smith said. "This information will be critical for our understanding of how these planets were formed and evolve."

Traditional material science experiments are conducted at very slow times relative to the inherent timescales associated with phase transitions. Until now, it has been difficult to directly probe the underlying physical mechanisms driving the transitions and there is not a lot of quantitative data because of the limitations in experimental techniques.

In the past, studies of time-dependent transformations have typically used shock compression, which gives an incomplete picture of what is going on inside of the sample.

"This research shows that the phase transitions occur when ramp compressed very rapidly," said Gilbert Collins, another one of the LLNL researchers.

During the recent experiment, Smith used a laser-driven RWL technique at high pressurization rates to study time-dependent effects on phase transformations in bismuth. Preheating enables access to different regions of pressure-temperature space and provides additional insights into the phase-transformation mechanisms.

The research appears as the cover article in the Aug. 8 edition of the journal Physical Review Letters .