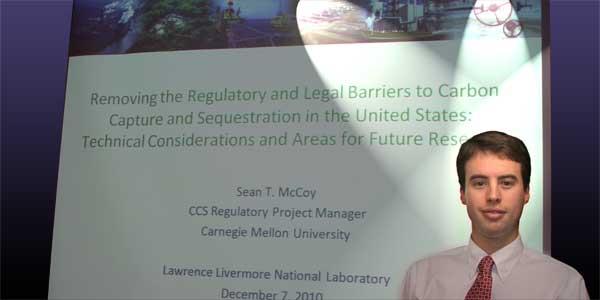 The concept of reducing greenhouse gases by capturing them and storing them underground has become one of several possible solutions being considered by climate researchers.

The detailed scientific aspects of carbon capture and storage/sequestration (CCS) have been under study for the past several years, with the experts arriving at a general consensus regarding techniques and capabilities.

What is less clear is how to resolve legal and regulatory issues related to CCS.

For example:
An effort to answer these questions is under way by a group called the CCS Regulatory Project, or CCSReg, whose project manager Sean McCoy of Carnegie Mellon University, met with Lab researchers last week.

McCoy delivered a presentation entitled "Removing the Regulatory and Legal Barriers to Carbon Capture and Sequestration in the United States: Technical Considerations and Areas for Future Research."

A crucial element of his work is to develop a set of rules and regulations that can then be approved by policymakers in Congress and state governments.

According to McCoy, under current federal law, "all injection of fluids into the subsurface is prohibited unless permitted by the Underground Injection Control program or exempted by the same regulations."

The U.S. Environmental Protection Agency has established a number of regulations for different types of wells, such as those for drinking water or oil. A new "well class" has been created for CCS, but many issues are still unresolved.

Furthermore, there is disagreement among regulators at the state level. For example, Montana has decided that the underground pore space belongs to whoever owns the property above it unless it can be proven otherwise. In North Dakota, the pore space is always owned by whoever owns the surface property and the two cannot be separated. But in Wyoming, ownership of the underground and surface properties can be severed.

McCoy's group recommends that a federal program be established to manage access to pore space. If conflicts arise, they would be resolved in one of three ways: contractually, modification of the project, or changing the ownership of the pore space by such methods as condemnation or eminent domain.

Another issue still unresolved is what to do about leakage of the CO2 over time. So far, no regulations determine the maximum amount of permissible leakage, nor how to penalize offenders.

In some cases, it may be difficult or impossible to actually measure surface leakage, in which case, McCoy recommends that penalties be based on the total amount of CO2 being stored.

Overall, CCSReg favors creation of a technical advisory committee to periodically review regulations and make recommendations based on scientific and legal developments, perhaps as often as every seven years.

No miracles required: Scientists, industry experts agree California’s carbon capture and storage can be a reality