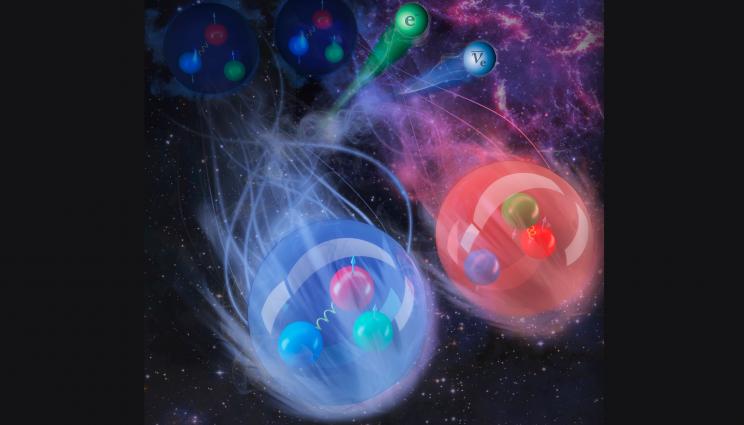 First-principles calculations show that strong correlations and interactions between two nucleons slow down beta decays in atomic nuclei compared to what’s expected from the beta decays of free neutrons. This impacts the synthesis of heavy elements and the search for neutrinoless double beta decay. Image by Andy Sproles/Oak Ridge National Laboratory.

For the first time, an international team including scientists at Lawrence Livermore National Laboratory (LLNL) has found the answer to a 50-year-old puzzle that explains why beta decays of atomic nuclei are slower than expected.

The findings fill a long-standing gap in physicists’ understanding of beta decay (converting a neutron into a proton and vice versa), a key process stars use to create heavier elements. The research appeared in the March 11 edition of the journal Nature Physics.

Using advanced nuclear model simulations, the team, including LLNL nuclear physicists Kyle Wendt (a Lawrence fellow), Sofia Quaglioni and twice-summer intern Peter Gysbers (UBC/TRIUMF), found their results to be consistent with experimental data showing that beta decays of atomic nuclei are slower than what is expected, based on the beta decays of free neutrons.

"For decades, physicists couldn’t quite explain nuclear beta decay, when protons inside atomic nuclei convert into neutrons or vice versa, forming the nuclei of other elements," Wendt said. "Combining modern theoretical tools with advanced computation, we demonstrate it is possible to reconcile, for a considerable number of nuclei, this long-standing discrepancy between experimental measurements and theoretical calculations."

Historically, calculations of beta decay rates have been much faster than what is seen experimentally. Nuclear physicists have worked around this discrepancy by artificially scaling the interaction of single nucleons with the electroweak force, a process referred to as "quenching." This allowed physicists to describe beta decay rates, but not predict them. While nuclei near each other in mass would have similar quenching factors, the factors could differ dramatically for nuclei well separated in mass.

Predictive calculations of beta decay require not just accurate calculations of the structure of both the mother and daughter nuclei, but also of how nucleons (both individually and as correlated pairs) couple to the electroweak force that drives beta decay. These pairwise interactions of nucleons with the weak force represented an extreme computational hurdle due to the strong nuclear correlations in nuclei.

The team simulated beta decays from light to heavy nuclei, up to tin-100 decaying into indium-100, demonstrating their approach works consistently across the nuclei where ab initio calculations are possible. This sets the path toward accurate predictions of beta decay rates for unstable nuclei in violent astrophysical environments, such as supernova explosions or neutron star mergers that are responsible for producing most elements heavier than iron.

"The methodology in this work also may hold the key to accurate predictions of the elusive neutrinoless double-beta decay, a process that if seen would revolutionize our understanding of particle physics," Quaglioni said.

The work was funded the Laboratory Directed Research and Development Program.

Read more about the research on the web.