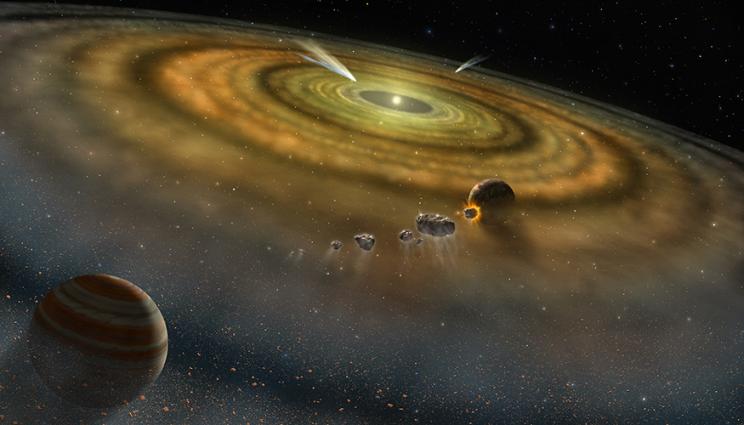 Artist's conception of the dust and gas surrounding a new planetary system. Image courtesy of NASA.

A long time ago — roughly 4.5 billion years — our sun and solar system formed over the short time span of 200,000 years. That is the conclusion of a group of Lawrence Livermore National Laboratory (LLNL) scientists after looking at isotopes of the element molybdenum found on meteorites.

The material that makes up the sun and the rest of the solar system came from the collapse of a large cloud of gas and dust about 4.5 billion years ago. By observing other stellar systems that formed similarly to ours, astronomers estimate that it probably takes about 1-2 million years for the collapse of a cloud and ignition of a star, but this is the first study that can provide numbers on our own solar system.

“Previously, the timeframe of formation was not really known for our solar system,” said LLNL cosmochemist Greg Brennecka, lead author of a paper appearing in Science. “This work shows that this collapse, which led to the formation of the solar system, happened very quickly, in less than 200,000 years. If we scale this all to a human lifespan, formation of the solar system would compare to pregnancy lasting about 12 hours instead of nine months. This was a rapid process.”

The oldest dated solids in the solar system are calcium-aluminum–rich inclusions (CAIs), and these samples provide a direct record of solar system formation. These micrometer- to centimeter-sized inclusions in meteorites formed in a high-temperature environment (more than 1,300 Kelvin), probably near the young sun. They were then transported outward to the region where carbonaceous chondrite meteorites (and their parent bodies) formed, where they are found today. The majority of CAIs formed 4.567 billion years ago, over a period of about 40,000 to 200,000 years.

This is where the LLNL team comes in. The international team measured the molybdenum (Mo) isotopic and trace element compositions of a variety of CAIs taken from carbonaceous chondrite meteorites, including Allende, the largest carbonaceous chondrite found on Earth. Because they found that the distinct Mo isotopic compositions of CAIs cover the entire range of material that formed in the protoplanetary disk instead of just a small slice, these inclusions must have formed within the time span of cloud collapse.

Since the observed time span of stellar accretion (1-2 million years) is much longer than CAIs took to form, the team was able to pinpoint which astronomical phase in the solar system’s formation was recorded by the formation of CAIs, and ultimately, how quickly the material that makes up the solar system accreted.

Former LLNL scientist Thomas Kruijer (now at the Museum für Naturkunde in Berlin) also contributed to this study, as well as researchers from University of Münster, California Institute of Technology and the University of California, Santa Cruz.

The work is funded by LLNL’s Laboratory Directed Research and Development program and NASA.