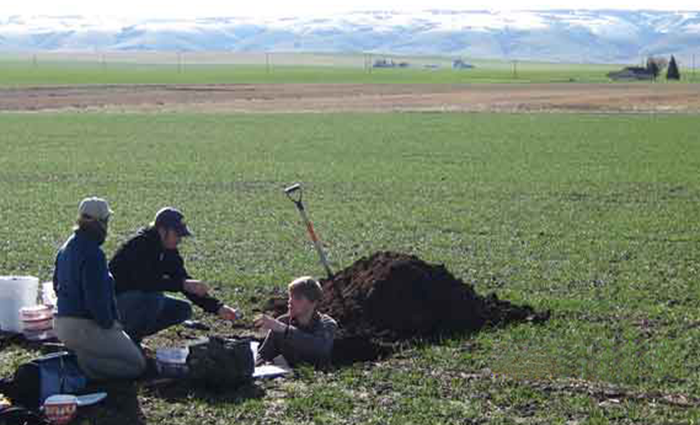 Soil organic matter, long thought to be a semi-permanent storehouse for ancient carbon, may be much more vulnerable to climate change than previously thought.

Plants direct between 40 percent and 60 percent of photosynthetically fixed carbon to their roots and much of this carbon is secreted and then taken up by root-associated soil microorganisms. Elevated carbon dioxide (CO2) concentrations in the atmosphere are projected to increase the quantity and alter the composition of root secretions released into the soil.

In new research in the March 30 edition of the journal, Nature Climate Change, Lawrence Livermore scientists and collaborators found that the common root secretion, oxalic acid, can promote soil carbon loss by an unconventional mechanism — freeing organic compounds from protective associations with minerals.

Root secretion-induced soil carbon loss is commonly attributed to "priming" — a short-term increase in microbial mineralization of native soil carbon as a result of fresh carbon inputs to the soil.

Previous studies have suggested that climate change enhances root secretions of organic compounds into soils. Recent experimental studies show that increased root secretion inputs may cause a net loss of soil carbon. This stimulation of microbial carbon mineralization, or "priming," is commonly explained by the notion of 'cometabolism,' i.e. that root secretions provide a readily bioavailable supply of energy for the decomposition of native soil carbon.

"Our Lawrence Scholar Marco Keiluweit showed that an alternate mechanism can cause carbon loss of equal or greater magnitude," said Jennifer Pett-Ridge, an LLNL scientist and one of the co-authors on the paper. "By enhancing microbial access to previously mineral-protected compounds, some root secretions promote an indirect mechanism of accelerated carbon loss, more than simply increasing the supply of energetically more favorable substrates.

"Our results provide new insights into the coupled biotic–abiotic mechanisms underlying the ‘priming’ phenomenon and challenge the assumption that mineral-associated carbon is protected from microbial cycling over millennial timescales," she said.

"Our study revealed a climate dependent 'priming' mechanism where plant secretions counteract the strong protective mineral-organic associations and facilitate the loss of carbon from the soil system," Pett-Ridge said. "If root secretion rates respond to climate change as predicted, elevated CO2 concentrations may not only stimulate secretion, they also may alter the composition of those secreted compounds released into soil, and increase metal and organic matter mobilization in the rooting zone."

The work was done using two unique technological capabilities, the NanoSIMS at Livermore and the synchrotron spectroscopy at Lawrence Berkeley National Laboratory.

Other Livermore scientists include Peter Weber and Jeremy Bougoure (now at University of Western Australia). Collaborating institutions include Oregon State University and Lawrence Berkeley National Laboratory. The work was supported by funding from the LLNL’s Laboratory Directed Research and Development (LDRD) program and the Department of Energy Office of Biological and Environmental Research (OBER) Genomic Science program.