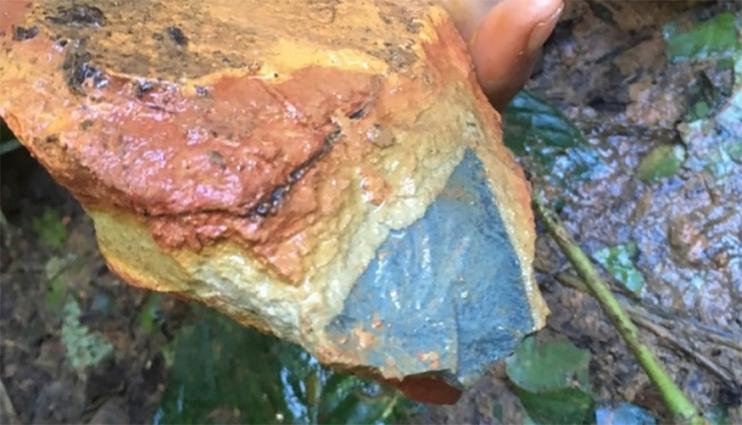 A colorful example of a rock that is partly weathered – in this case, a volcanoclastic rock from Puerto Rico that is being transformed into clays and iron oxides from the outside in. Photos by Eric Slessarev/LLNL.

Rock weathering controls the potential for soil carbon storage at a continental scale.

“We found that the link between primary mineral weathering, poorly crystalline minerals and soil carbon has not been fully tested, particularly at large spatial scales,” said LLNL scientist and co-lead author Eric Slessarev. “To close this knowledge gap, we designed a model that links primary mineral weathering rates to the geographic distribution of poorly crystalline minerals across the USA, and then used this model to evaluate the effect of rock weathering on soil organic carbon.”

The team found that poorly crystalline minerals are most abundant and strongly correlated with organic carbon in geographically limited zones that experience enhanced weathering rates, particularly where humid climate and plenty of primary minerals co-occur. This finding confirms that rock weathering alters soil mineralogy to enhance soil organic carbon storage at continental scales, but also indicates that the influence of active weathering on soil carbon storage is limited.

Most of the terrestrial biosphere’s carbon is stored below ground as soil organic carbon (SOC). Small changes in the relative size of the global SOC pool can influence atmospheric CO2 levels, and hence global climate. But in most soils, a significant fraction of SOC is associated with minerals that limit its rate of exchange with the atmosphere.

Primary mineral weathering rates, PCM stocks and carbon storage are linked because poorly crystalline minerals are relatively transient weathering products. Studies of soil age gradients show that these minerals accumulate during the initial stages of weathering but later decline as the stock of primary minerals is exhausted and PCMs ripen into less reactive crystalline secondary minerals. Across rock types, these minerals are most abundant in soils formed from volcanic parent materials rich in feldspars and glass with feldspar-like composition and in humid climates, where ample water facilitates higher weathering rates.

“Taken together, these facts indicate that the primary mineral weathering rate is a key factor that determines the abundance of PCMs,” said LLNL scientist and co-author Jennifer Pett-Ridge. “PCMs disappear over time as they ripen into more crystalline minerals; so additional active weathering is required to maintain soil PCMs and lead to the conditions needed for heightened carbon storage.”