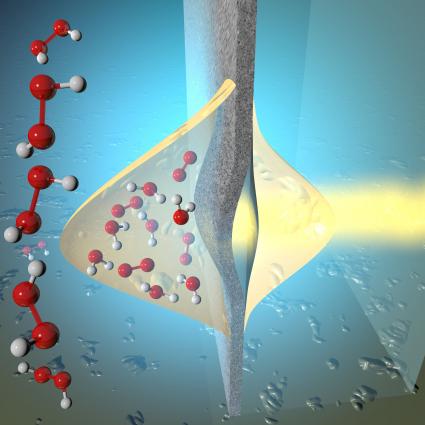 A schematic representation of the shock experiment. The resulting energy release pushed the shock front to the left. Image by Liam Krauss/LLNL. 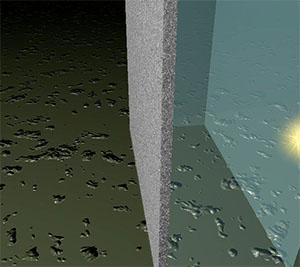 A laser pulse impinging on an aluminum ablation layer (which is coated on a glass substrate to the right), which generates a rapidly expanding plasma. This small explosion pushes the ablator to the left and drives a shock wave in the sample. The experiment simultaneously measures the speed of the shock wave in the sample, and the speed of the ablator expansion, which allows Livermore researchers to estimate the pressure and density of the shocked sample. Animation by Liam Krauss/LLNL.

Lawrence Livermore National Laboratory researchers have combined ultrafast time-resolved experimental measurements with theory to reveal how an explosive responds to a high-impact shock.

The work involved advances in both ultrafast experimental shock wave methods and molecular dynamics (MD) simulation techniques, and the combination of experiment and simulation is a milestone in understanding chemical initiation and detonation.

When an energetic material is hit hard and fast enough it will explode. What occurs between the moment of initial impact and the time the explosion occurs continues to be a highly studied topic.

"Hydrogen peroxide, composed of one oxygen-oxygen bond and two oxygen-hydrogen bonds within a hydrogen bonding network afforded us the opportunity to study a very complex process using a relatively simple molecular liquid," said project leader Sorin Bastea. "We also knew that the final reaction products would be simple too: They are just oxygen and water."

The Livermore team demonstrated that 50 trillionths of a second (50 picoseconds) after the peroxide was shocked it begins to tear apart. The chemical bonds were completely broken by 100 picoseconds. The temperature increased by more than 1,500 degrees and the explosive pressure wave spiked to more than 200,000 atmospheres.

"What is unique about this research effort is that we have ultrafast time-resolved experimental data that corroborate our theoretical predictions on the exact same timescale," said Nir Goldman who, along with Will Kuo, led the simulation efforts.

The experiment, led by Mike Armstrong and Joe Zaug, used a very short burst of laser energy to blast into a 0.001 millimeter-thick aluminum film that was in contact with the peroxide. They measured the shockwave speed as it traveled through the fluid using a technique called optical interferometry.

"At the initiation threshold, we were able to directly observe a significant jump in the shock velocity, indicating that we had mechanically initiated chemical reactions in the sample," Armstrong said.

With the help of additional high-pressure sound-speed measurements made by Zaug and Jonathan Crowhurst,  Bastea was able to further calculate the amount of chemical reaction observed in the team's ultrafast shock experiments to be approximately 50 percent. Bastea emphasized that the collaboration between experimentalists and theorists was key to enabling a more comprehensive understanding of shock-induced chemical initiation.

"This is a step forward where eventually we can have a better understanding of how to control the delivery of chemical energy for a variety of energetic materials applications," Bastea said.

The work is featured on the cover of the Dec.12 issue of the Journal of Physical Chemistry A.