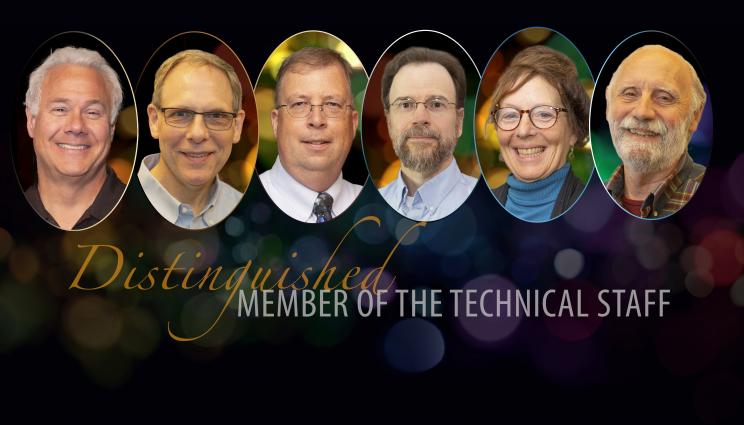 Six Lawrence Livermore National Laboratory (LLNL) scientists have been named Distinguished Members of Technical Staff (DMTS) for their extraordinary scientific and technical contributions to the Laboratory and its missions, as acknowledged by their professional peers and the larger community.

The DMTS classification was created to serve as a career ladder for LLNL scientists and engineers within the Science & Engineering (S&E) classification structure. It appropriately recognizes outstanding S&T excellence with distinction and compensation while allowing the honored recipients to remain focused on delivering science and engineering solutions to critical mission areas of the Laboratory.

Chris Carson is a nearly 32-year veteran of the Laboratory. He started as an industrial partner at LLNL on the Ground-based Free-electron Laser Technology Integration Experiment for the Strategic Defense Initiative. He joined LLNL’s Atomic Vapor Laser Isotope Separation program in 1988 as a Lab employee. In 1993, he joined Z Division in what became the Global Security PAD.

He is an internationally recognized subject matter expert on Iran, served three Washington, D.C. assignments including in the Office of the Director of National Intelligence as chairman of the Joint Atomic Energy Intelligence Committee from 2012-2014 in Washington, D.C., and has spent more than 26 years as an intelligence analyst, winning 15 separate awards in this arena.

“Working in classified national security programs brings with it an expectation of some amount of anonymity. Hence, it is especially gratifying to be named a Distinguished Member of the Technical Staff working in a field where individual accomplishments usually remain hidden from the public arena,” Carson said. “I am both deeply humbled and honored to be recognized for my accomplishments and contributions in a career dominated by classified work in foreign nuclear program assessments and proliferation prevention, detection, characterization and mitigation.”

While nuclear proliferation continues to challenge U.S. national security policy and international stability. Carson hopes to continue working toward peaceful solutions to these regional and global challenges through applying scientific and engineering knowledge, experience and methods.

Larry Fried has worked at the Laboratory for 27 years. He is a leader in computational and experimental detonation and high-pressure science. He created the Cheetah high explosive thermochemical code, providing a significant capability to several hundred users at the Department of Energy, Department of Defense and the broader defense community. He also developed new computational methods for the design of high explosive (HE) molecules.

His theoretical and computational developments continue to have a critical impact on the NNSA Stockpile Stewardship Program, enabling a fundamental understanding of HE performance and aging.

“I am deeply honored by my selection as a DMTS,” Fried said. “ I have been extremely fortunate in finding a highly supportive research environment and very talented colleagues to carry out research. I love interdisciplinary, mission-oriented research, and LLNL is the best place in the world to do that.”

Dan Kalantar was hired to the Lab in 1993 as a postdoc in the laser program and became a staff scientist in 1995. He has spent his career at the Lab working  in laser programs and NIF.

Kalantar is the leading expert in developing and implementing laser-target experiments for high energy density physics and is recognized worldwide. He has a keen ability to integrate complex physics and facility issues to deliver a platform that provides physics results. He published the first experiments establishing that large laser facilities can be used to measure the solid state properties of materials at high pressure.

In addition to his scientific achievements, he has mentored students and early career staff.

“I am honored to have been awarded the status of DMTS,” Kalantar said. “It is a recognition that the role I have had developing experimental capabilities is important and valued.”

Brian Pudliner is a 23-year veteran of the Laboratory who helped pioneer the use of a multi-physics, 3D, high-resolution simulation toolset in providing the insight needed to make scientifically credible stockpile stewardship decisions.

He delivered first of a kind, 3D computational stockpile assessments in many areas and paved the way for these to become routine assessment techniques. As Dimitri Kusnezov, deputy undersecretary for AI and Technology at the Department of Energy, said: “Today, those heroic efforts are now routine work at the labs. He has had a broad sweeping impact on the national security complex, both nationally and internationally."

He spent 16 years as a Design Physics Division group leader with an outstanding ability to guide, support, mentor and inspire. In 2015, he earned a Lab Early and Mid-Career Recognition award.

“I appreciate the recognition of being selected as DMTS, but I don’t think I could have accomplished much without the good fortune to work on challenging problems with really amazing people,” Pudliner said. “I feel distinguished by the opportunities I’ve been given and by the teams I’ve been able to be a part of at the Lab.”

Marilyn Schneider joined the Lab in 1986 and has led experiments and development of diagnostics to understand physics and applications of high energy density plasmas for basic science and program missions for 34 years.

In addition to her scientific achievements, Schneider also recruits and mentors early career scientists and Ph.D. students and led hands-on workshops for 10 years for teenage girls at the “Expanding Your Horizons” conference.

George Zimmerman started at the Laboratory as summer student in 1969 and stayed his entire career. He has contributed to LLNL missions primarily through large integrated code development and by leading and mentoring other code developers.

He pioneered the field of inertial confinement fusion capability by leading teams that developed innovative methods to model laser, electron and ion beam deposition, magnetohydrodynamics, atomic physics and the transport of photons, neutrons and charged particles, Under development for nearly 50 years, the resulting Lasnex code serves as a national benchmark for inertial confinement fusion simulations.

Among his accolades, Zimmerman earned the 1983 E.O. Lawrence Award for contributions to national security and the 1997 Edward Teller Award for developing the Lasnex Inertial Confinement Fusion code. From 1984-87, he served as the inaugural leader of the Lab’s Computational Physics Division.

“I think it is wonderful that LLNL has such a way to honor its technical staff,” Zimmerman said. “Being associated with other DMTS, which I highly respect, is indeed an honor.”