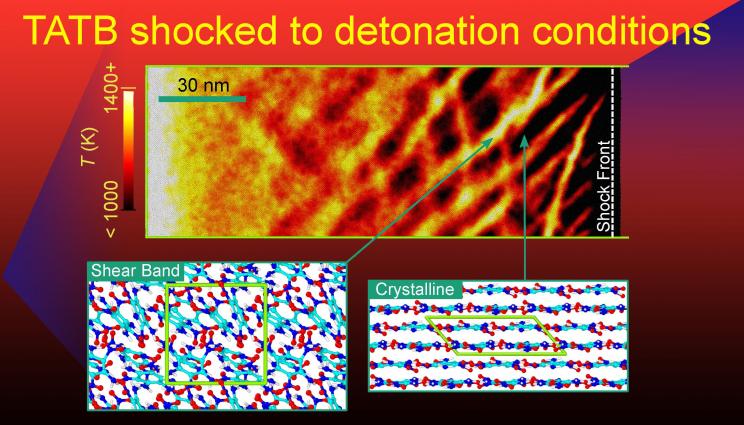 The research will allow for systematic improvements to continuum mechanics models used to assess the performance and safety of the material accurately and reliably.

Highly insensitive explosives offer greatly enhanced safety properties over more conventional explosives, but the physical properties responsible for the safety characteristics are not clear. Among explosives, TATB is nearly unique in its safety-energy trade-offs.

Engineering models for shock initiation safety and detonation performance of explosives rely on physics models that center on the formation and growth of hot spots (local regions of elevated temperature that accelerate chemical reactions) thought to govern these responses. However, models for TATB based on the hot spot concept have so far been unable to simultaneously describe both initiation and detonation regimes. This indicates missing physics in the fundamental understanding of what processes drive insensitive high explosives to detonate.

To uncover these missing physics, the team used supercomputer simulations involving many millions of atoms to peek at the material response right behind a detonation shock wave. What they found was the dynamic formation of a complicated network of shear bands in the material. Shear bands are local regions of highly disordered material that are produced when the material fails under extreme stresses. While the response was not completely unexpected, it was unclear what it implied.

“Shear bands are predicted and observed to form in many explosives, but the chemical significance of their formation is not well known,” said LLNL scientist Larry Fried, one of the authors of the paper. Despite this uncertainty, the scientists thought they had a lead on the missing physics.

Answering questions regarding the chemical reactivity of shear bands required turning to quantum-based molecular dynamics (QMD) simulation approaches and high performance computing. “The main challenge with QMD is that it can only be applied to small systems, so we developed a multiscale modeling technique to look at the chemistry of shear band and crystal regions in representative volume elements,” explained Matt Kroonblawd, lead author on the study.

Through scale bridging with QMD, the team found that disordered material in shear bands becomes chemically activated. The bands are formed in strongly shocked TATB and react 200 times faster than the crystal, which gives a physical explanation for why engineering models required empirical “switching functions” to go between shock initiation and detonation situations.

The scientists describe this newly discovered phenomena as “chemical activation through shear banding,” which leads to enhanced reaction rates without the local heating typically evoked by the hot spot paradigm. Capturing this response in explosives models will improve their physical basis and allow for systematic improvements to assess performance and safety more accurately and reliably.

The research appears in the May 22 online edition of Physical Review Letters.

This work was funded by the NNSA Advanced Simulation and Computing program, through its Physics and Engineering Models and Large-Scale Calculation Initiatives, and through the LLNL Laboratory-Directed Research and Development Strategic Initiative Program.