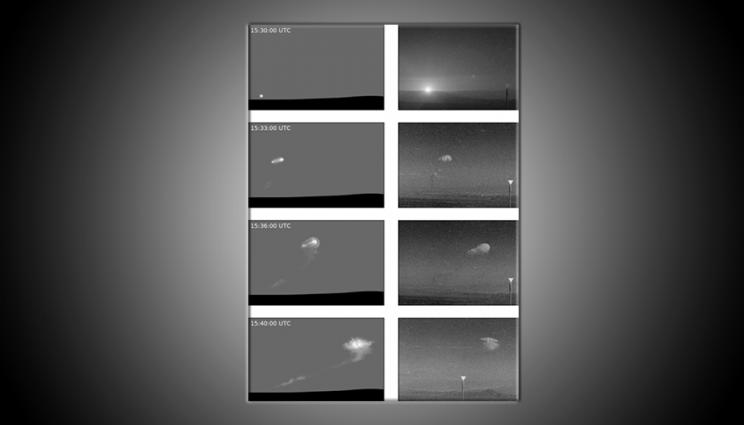 Comparison of WRF cloud evolution (left column) to film observations (right column) for the Encore test. WRF results are depicted using a meridional sum of the passive tracer C. Note that the camera angle of the observations changed between 15:36 and 15:40 UTC; the post in the foreground of each image can be used as a reference point.

The Weather Research and Forecasting (WRF) model has been a mainstay in weather forecasting and cloud modeling for decades. The model source code is maintained by the National Center for Atmospheric Research, but it is community-developed, using several contributions from researchers at LLNL. In particular, the LLNL version of WRF is used at the National Atmospheric Release Advisory Center to simulate the movement and turbulence of airborne particulates flowing around terrain features and buildings. Compared to the lower-fidelity simulations often used to model cloud rise for emergency response, a WRF-based model of a nuclear cloud incorporates time-varying weather for the exact location under study. This adaptability and high resolution appealed to one of the paper’s authors, Livermore mechanical engineer Katie Lundquist.

“Because we have so much experience developing the model for meter-scale resolutions, we thought this model was very well-suited to modeling cloud rise,” she said. Additional co-authors on the paper include Robert Arthur, Jeffrey Mirocha, Stephanie Neuscamman, Yuliya Kanarska and John Nasstrom.

While many of the U.S. atmospheric tests were done in the arid environment of Nevada, Lundquist said, a future nuclear event could occur anywhere.

“You have to use a model that has predictive capabilities for these complicated environments,” she said. "A weather model is the perfect choice because it’s used operationally to predict weather all over the world.”

The researchers used the May 8, 1953 “Encore” event as a basis for testing their WRF hypothesis. Using global atmospheric reanalysis data to simulate conditions on that date, they fed the WRF model the parameters of a nuclear fireball and dialed in the resolution accordingly. After running the model, their simulation matched the 1953 photos remarkably well.

“We were shocked that it matched so well,” said Lundquist, who recently spoke to LiveScience about how mushroom clouds are formed in a nuclear explosion. “The cloud rise simulation is able to match the rise rate and the stabilization height, as well as little qualitative features like the tilting of the torus in the cloud and the timing for the torus breaking down to being a more turbulent cloud. We were very pleased with our results, and surprised that we had to do very little tuning to get these results to look as good as they do.”

Some of the credit belongs to the WRF model, said Lee Glascoe, LLNL Nuclear Emergency Support Team Program leader. “This weather model has been in use for about 20 years, and so a lot of validation has gone into this model,” he said. “I think we’re benefiting from the last 20 years of weather research and forecasting that has happened within this model. It’s really a great tool for what we’re doing.”

Funding for the research on cloud rise came from the Laboratory Directed Research and Development program and the Office of Nuclear Incident Response, while funding for high-resolution modeling capabilities also have come from the Department of Energy’s Wind Energy Technologies Office.

Glascoe added that the research would have been impossible without the high-resolution simulation capabilities that Lundquist and her team developed and incorporated into the WRF model. The improved sophistication of WRF allows the cloud simulation to predict the “rainout” of radioactive particles, particularly somewhere with more atmospheric moisture. All of the innovative work at Lawrence Livermore is creating a model applicable to a wide range of environmental conditions, from a dry, rural environment like the Nevada test site, to a humid environment or a densely populated urban area.

“Nobody has the capability for that except Livermore,” Lundquist said. “It all comes back to the idea that we need to forecast the consequences of hazardous atmospheric releases. We have the operational mission to do that. All this research is going to end up in operations and improve our predictions.”