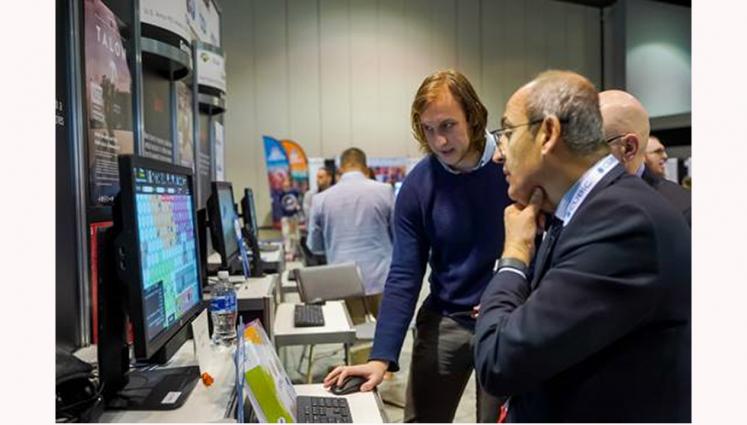 Jake Tibbetts (far left), a University of California, Berkeley student and a research assistant at the Lab’s Center for Global Security Research, and Jon Whetzel (middle), a researcher at Sandia National Laboratories/California, provide a demonstration of the SIGNAL wargame to another conference participant. Photo by Event Photography of North America Corp. for the Interservice/Industry Training Simulation and Education Conference.

The wargame, called SIGNAL, won the “best student game” among five finalists in the Serious Games Showcase and Challenge competition of the Interservice/Industry Training Simulation and Education Conference (I/ITSEC).

The week-long I/ITSEC gathering was held during the first week of December at the Orange County Convention Center in Orlando, Florida. About 20 other computer games were finalists in the business and government categories.

LLNL was represented at the conference by Jake Tibbetts, a research assistant at the Lab’s Center for Global Security Research (CGSR) for the past eight months and a UC Berkeley senior.

SIGNAL provides a flexible gaming environment that can be used to study a variety of research questions and simulate some aspects of warfare. The platform also allows for large, quantitative analysis of game outcomes in a multi-player context, tracks demographic data and automatically collects players and game data in real time.

Under development as an online platform since May 2018, SIGNAL is a collaborative effort of the Project on Nuclear Gaming (PoNG), a three-institution team of UC Berkeley, LLNL and SNL that has been established by the Carnegie Corporation of New York. This effort, funded through UC Berkeley, and several other Carnegie projects seek to understand the impact of emerging technologies on strategic stability and the potential for nuclear risk reduction.

“It really validates the approach the team took in designing and developing this experimental wargame platform. We’re happy that this three-way collaboration – UC Berkeley, Sandia and Livermore – has gone well and this is a recognition of the project’s success.”

One of the priorities of Brad Roberts, the director of the CGSR, is to help develop the next generation of national security professionals, according to Spain.

“Jake is a prime example of the high-quality interns that we’ve been able to recruit and have work on meaningful national security projects here at the center.

“Jake’s contributions to SIGNAL have been very important and this award recognizes his work. Jake and the team have worked very hard on developing this gaming platform,” Spain added. 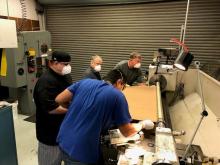