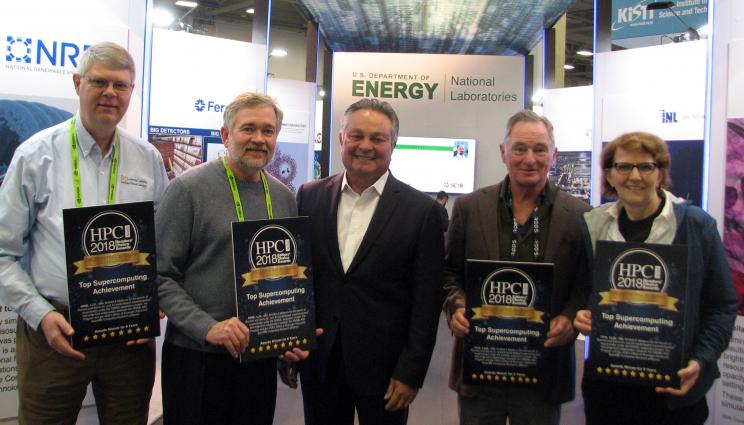 Representatives from LLNL and ORNL accepted the awards for Sierra and Summit at the 2018 International Conference for High Performance Computing, Networking, Storage and Analysis (SC18) conference in Dallas, Texas. The two systems, both IBM-built and comprised of IBM CPUs and NVIDIA graphics processing units (GPUs), were fully installed and accepted earlier this year. They currently hold the top spots on the latest TOP500 list, with Oak Ridge’s 200-petaflop Summit supercomputer maintaining its No. 1 ranking.

"LLNL is pleased to be recognized for this achievement," said Michel McCoy, LLNL’s program director for Advanced Simulation and Computing. "We give our deep regards and recognition to our vendor partners, IBM, NVIDIA and Mellanox who worked so closely with us these past four years, as we developed and optimized applications that suggest that the Sierra system will run key applications very efficiently over the next half decade as we pursue our national security work."

Sierra is a 125-petaflop (125 quadrillion floating-point operations per second) peak performance machine and supports the National Nuclear Security Administration’s (NNSA) mission to ensure the safety, security and reliability of the nation’s nuclear stockpile. The system will serve the NNSA’s three nuclear security laboratories -- LLNL, Sandia National Laboratories and Los Alamos National Laboratory -- and is expected to go into the classified environment in early 2019. Sierra is projected to be six to 10 times more powerful than LLNL's Sequoia, currently the 10th fastest supercomputer in the world.

Siting and completing the system required years of procurement, design, code development and installation, and involved hundreds of computer scientists, developers and operations personnel working in close partnership with IBM, NVIDIA and Mellanox. Sierra debuted as the third-fastest supercomputer in the world in June and moved up to the second spot in the November version of the TOP500 List announced Monday.

With a peak performance of 200 petaflops, Summit is eight times more powerful than ORNL’s previous top-ranked system, Titan. For certain scientific applications, Summit also will be capable of more than three billion billion mixed precision calculations per second, or 3.3 exaflops. Summit is providing scientists with incredible computing power to solve challenges in energy, artificial intelligence, human health and other research areas, that were simply out of reach until now. These discoveries will help shape our understanding of the universe, bolster US economic competitiveness and contribute to a better future.

The annual HPCwire Readers’ and Editors’ Choice Awards are determined through a nomination and voting process with the global HPCwire community, as well as selections from HPCwire editors. The annual awards kick off the annual Supercomputing conference, which showcases high performance computing, networking, storage and data analysis.

"This year marks the 15th anniversary of The HPCwire Readers’ and Editors’ Choice Awards. These awards serve as a pillar in our community, acknowledging major achievements, outstanding leadership and innovative breakthroughs," said Tom Tabor, CEO of Tabor Communications and publisher of HPCwire. "Receiving an HPCwire award signifies an undeniable community support and recognition. We are proud to acknowledge our winners this year and as always to allow our readers voices to be heard. I would like to personally congratulate each and every one of our winners, as their awards come well deserved."