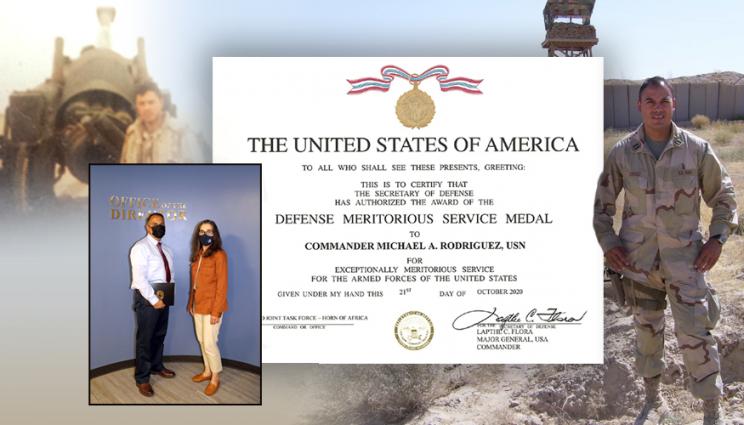 Before coming to the Lab, Mike Rodriguez spent 34 years in the military, culminating in a 10-month deployment in Africa and receiving the Defense Meritorious Service Medal for exceptional service. LLNL Director Kim Budil recently met with Rodriguez to congratulate him.

The Veterans/Military Outreach and Recruiting Program at Lawrence Livermore National Laboratory (LLNL) is committed to supporting and recruiting military students, reserve and active duty, transitioning service men and women and veterans. The program’s initial focus on recruiting and hiring has aided directly in the employment of 463 veterans, with many more serving on internships ranging from four weeks to one year, supporting the critical mission, values and priorities of the Lab.

In honor of Military Appreciation month, LLNL is beginning a monthly showcase of those who have served in the armed forces or are currently serving to exemplify the Laboratory’s commitment to veterans and armed forces service members.

Mike Rodriguez joined the Laboratory in 2015 as the Training and Compliance group lead within the Operations and Business Directorate. He brought with him an impressive 34 years of operational and intelligence experience, both in the Marine Corps as an enlisted Marine and as a naval intelligence officer.

What is unique about Rodriguez is that his service has not ended with his employment at LLNL — he has maintained his role as a reservist and in 2020, spent 10 months in Africa as the director of intelligence, responsible for all intelligence activities for 12 East African countries and leading 160 total joint military and civilian personnel across four intelligence disciplines at eight locations, from multiple national level agencies and countries. Rodriguez provided more than 20,000 U.S. and coalition forces with indications and warning, force protection and intelligence support. He also supported crisis response planning and operations, great power competition and counter violent extremist organization operations throughout East Africa. In addition, he led key leader engagements that strengthened partnerships throughout the region, enabling enhanced intelligence sharing, counterterrorism, counter-piracy and security capabilities. Because of his outstanding service, Rodriguez was awarded his third Defense Meritorious Service Medal for exceptional service in October of 2020.

Rodriguez has a long family history of military service, dating back to the French Indian War and continues to this day. “We have had a family member serve in every war since before the Revolution,” Rodriguez said. “My father, who was Mexican American and Native American, was drafted during the Vietnam War, but because he had four kids, they didn’t send him. That didn’t stop my uncles from serving in WWII, Korea and Vietnam. My brother also was a Marine. My uncle, who is a Vietnam veteran, said that there are only two things our family is good at -- military and sports.

"My mother was French Creole/African American from New Orleans and had three brothers who were professional boxers. One was the light middleweight champion of the world in 1963 and a member of the International Boxing Hall of Fame," he added. "Others have been professional jockeys, basketball players and football players.”

When Rodriguez was young, his family moved from New Orleans to San Francisco, where he was raised in the Mission District and Potrero Hill neighborhoods.

“I did not live with my father. My grandparents moved to San Francisco because of racism and discrimination they experienced living in New Orleans,” Rodriguez said. “My grandparents wanted our family to have a fresh start. I grew up very poor, raised by my mom with three other brothers and sisters. There was a time that we lived in a homeless shelter until my mother was able to get us into affordable housing.”

Rodriguez went to five different elementary schools and eventually graduated from Mission High School. He knew he was going to be a Marine as far back as the fifth grade. “It gave me a reason to graduate from high school,” he said.

“The military saved my life,” Rodriguez said. “It gave me the structure and discipline I needed to go to college at both San Francisco State University and UC Berkeley. I knew I wanted a career in the military. However, I never imagined I’d be in this long. The change is forever, I have had experiences that few will ever have. From Desert Storm to Afghanistan to East Africa combat deployments, I have served all over the world.”

“Highlights of my 14 years in the Marine Corps began with multi deployments to Okinawa, Japan, Camp Fuji, Japan and South Korea,” Rodriguez said. “In 1990, I was part of the first group of Marines that landed in Saudi Arabia in response to the invasion of Kuwait by Iraq. As part of the 1st Marine Division, I participated in every major ground battle that the division fought in, starting with several raids into Kuwait during the air campaign, the Battle of Khafji, Al Burqan Oil Fields, Al Jaber Airfield, Kuwait City and Kuwait International Airport. Our battalion was the first to engage Iraqis in ground combat. After the Gulf War, I returned to the 1st Marine Expeditionary Brigade with follow-on orders to Camp Pendleton, California.”

After the war, Rodriguez took the opportunity to go to school and earn a degree, but that was not the end of his service. He was commissioned in the Navy as an intelligence officer in 2002 and served as a reservist at the Office of Naval Intelligence. He was recalled to active duty in 2007 and deployed to Kandahar, Afghanistan, as Task Force Counterintelligence Coordinating Authority. Rodriguez  became responsible for all counterintelligence and HUNIT intelligence in southern Afghanistan. The next six years were spent at U.S. Cyber Command as operations officer, executive officer and officer in charge within the Joint Intelligence Operations Center. He returned to the reserves and in 2019 was recalled again for his final deployment to serve as deputy director and eventually director of intelligence for Combined Joint Task Force Horn of Africa, responsible for 12 countries in East Africa.

The unique skills acquired in the military are well-suited to work at LLNL, where passion for mission and passion for nation go hand in hand.

LLNL provides continuous support to employee veterans through an employee resource group, Veterans in Energy, Technology and Science (VETS). VETS provides a community network and promotes the value of veterans through investment in education, career development and lifelong support.

Rodriguez likes to network and get involved. He is active in several employee resource groups such as the African American Body of Laboratory Employees and the American Indian Activity Group.

“The Lab is a place where veterans can continue serving the country,” said Rodriguez. “I feel like I am surrounded by others who feel the same way I do about our mission and why we are here.”

LLNL, other Bay Area labs to host webinar about business partnerships, the future of semiconductors