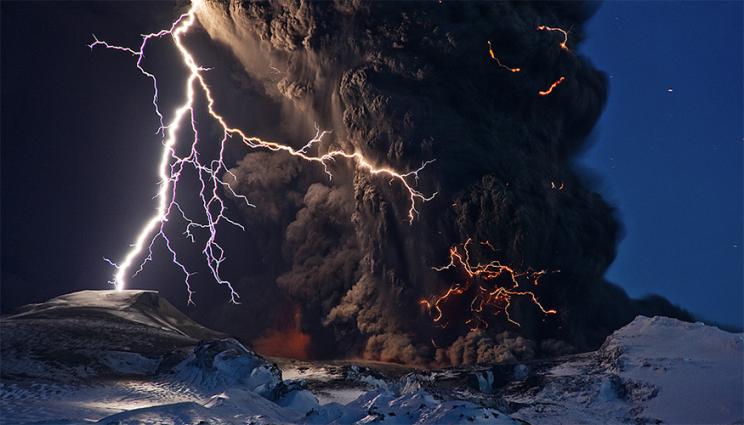 A new study led by LLNL scientists examined how shock waves and electric discharges interact in particle-laden flows. The work has implications for environments such as volcanoes, where radio frequency emissions from lightning may transmit information about conditions inside the eruption.

Volcanic eruptions spew lava, rock and ash into the air. When fragments of these materials mix and collide in the outflow, they can create an electric potential large enough to generate lightning.

New research by Lawrence Livermore National Laboratory (LLNL) scientists and collaborators discovered that standing shock waves in the supersonic outflow of gases prevent electric discharges like sparks and lightning from propagating. This suggests standing shocks formed by a volcanic eruption may suppress or reduce volcano lightning during the initial phase of an eruption. The new research appears in the journal Communications Earth & Environment.

In nature, electric discharges in the form of lightning are frequently observed not only in thunderclouds, but also in widely diverse environments that exhibit turbulent particle-laden ﬂows, such as volcanic plumes and dust devils.

During electric discharge, radio frequency (RF) emissions can be recorded, providing a means to track the progressive evolution in space and time of the lightning source. Similar to the detection of thunderclouds and storms, RF detection also is now being used to detect and inform on the hazards associated with ash-laden volcanic plumes and ash clouds. In particular, lightning at active volcanoes in a state of unrest can indicate the onset of hazardous explosive activity and the production of ash plumes. In addition, both observable discharges and RF emissions can reveal the mechanisms that initiate the lightning and offer clues about the makeup of the erupting material.

Explosive volcanic eruptions can generate lightning that emits RF signatures. At early times in the eruption, moreover, shock waves in the supersonic flow may act to mediate the path of the lightning, recognizably modifying the RF signatures.

The team imaged sparks and a standing shock together in a transient supersonic jet of micro-diamonds entrained in argon. Shock waves represent a sharp transition in gas density and hence in the tendency of the gas to ionize. Fluid dynamic and kinetic simulations of the experiment illustrated how the observed sparks are bounded by the standing shock.

Observations of erupting volcanoes in Alaska, Iceland and Japan have revealed that in the ﬁrst few seconds following the onset of an explosive eruption, RF signatures distinct from those produced by leader-forming lightning are recorded in the vicinity (within 10s to 100s of meters) of volcano vents.

“If the sources of near-vent continual radio frequency emission are regulated by standing shock waves, then distributed antennas could pinpoint their locations, tracking the evolution of the regulating standing shock and providing insight into the pressure and particle content of the explosive ﬂow,” said Jason Sears, LLNL scientist and principal investigator for the project. “The fast decompression experiments and simulations that Jens led permit observation and analysis of explosive events producing RF at their onset.”

Other institutions involved include the Special Technologies Laboratory of Santa Barbara, California, the University of Florida and the Ludwig Maximilian University of Munich.