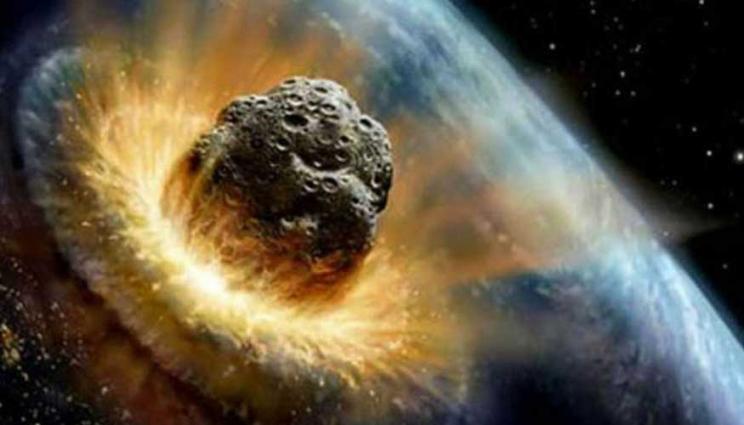 It has been hypothesized that lonsdaleite forms when graphite-bearing meteors strike the Earth. The violent impact generates incredible heat and pressure, transforming the graphite into diamond while retaining the graphite’s original hexagonal structure.

In 1967, a hexagonal form of diamond, later named lonsdaleite, was identified for the first time inside fragments of the Canyon Diablo meteorite, the asteroid that created the Barringer Crater in Arizona.

Since then, occurrences of lonsdaleite and nanometer-sized diamonds have been speculated to serve as a marker for meteorite impacts, having also been connected to the Tunguska explosion in Russia, the Ries crater in Germany, the Younger Dryas event in sites across North America and more.

It has been hypothesized that lonsdaleite forms when graphite-bearing meteors strike the Earth. The violent impact generates incredible heat and pressure, transforming the graphite into diamond while retaining the graphite’s original hexagonal structure. However, despite numerous theoretical and limited experimental studies, crucial questions have remained unresolved for short-time high-pressure environments relevant to meteor impacts, particularly the structural state immediately after the shock transit, the timescales involved and the influence of crystalline orientation.

In a new paper published today by Nature Communications, a team of researchers, including scientists from Lawrence Livermore National Laboratory (LLNL), provides new insight into the process of the shock-induced transition from graphite to diamond and uniquely resolves the dynamics of the phase change.

The experiments show unprecedented in situ X-ray diffraction measurements of dynamic diamond formation on nanosecond timescales by shock compression of graphite starting at pressures above 0.5 Mbar (1 Mbar = 1 million atmospheres). The team observed the direct formation of lonsdaleite above 1.7 Mbar, for the first time resolving the process that has been proposed to explain the main natural occurrence of this crystal structure being close to meteor impact sites.

"Due to difficulties in creating lonsdaleite under static conditions, the overall existence of this crystal structure in nature has been questioned recently," said lead author Dominik Kraus. Kraus conducted this research while working as a University of California, Berkeley Physics Department postdoc sited within LLNL’s NIF & Photon Science directorate. He now serves as the Helmholtz Young Investigator group leader at Helmholtz-Zentrum Dresden-Rossendorf in Germany.

"However, static experiments cannot mimic fast dynamics such as those in violent meteor impact events," he said. "Here we show that we can indeed create a lonsdaleite structure during dynamic high-pressure events. This is interesting for modeling dynamic phase transitions in general, but also shows that the lonsdaleite found in nature could indeed serve as a marker for violent meteor impacts."

The experiments were conducted at the Matter at Extreme Conditions (MEC) experimental area at the Linac Coherent Light Source (LCLS) at the SLAC National Accelerator Laboratory at Stanford. Graphite samples were shock-compressed to pressures of up to 2 million atmospheres (2 Mbar) to trigger the structural transitions from graphite to diamond and lonsdaleite. The phase changes in the high-pressure samples were probed with ultrafast (femtosecond) X-ray pulses created by LCLS. 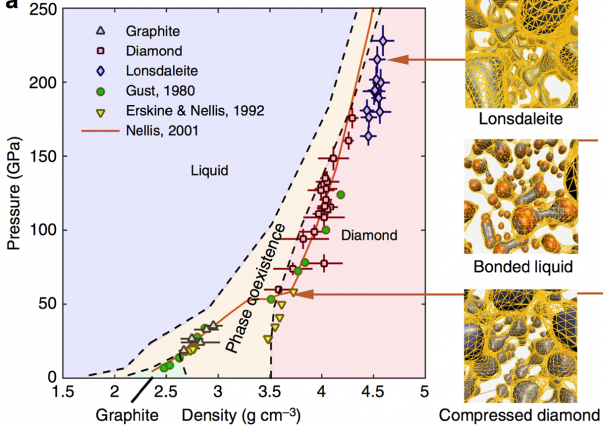 According to Kraus, this was the very first in situ structure measurement of the shock-induced graphite to diamond transition. Before these experiments, all conclusions regarding this structural transition were based on the material that was recovered after applying the shock drive or dynamic measurements of macroscopic quantities, such as density and pressure.

"You won’t get rich from our experiments, but the shock-induced transition from graphite to diamond already has important industry applications," he said. "For example, nanometer-sized diamonds for fine polishing of materials are created by detonation of carbon-bearing explosives. These explosions typically generate pressures up to ~0.5 Mbar, just above the threshold of diamond formation. Here we show that above 2 Mbar, the lonsdaleite structure can be generated in a very pure form. Since pure lonsdaleite is supposedly even harder than diamond, this is highly interesting and other groups now try to recover these samples after an experiment."

The U.S. Department of Energy’s Office of Science and the German Federal Ministry for Education and Research funded the work.