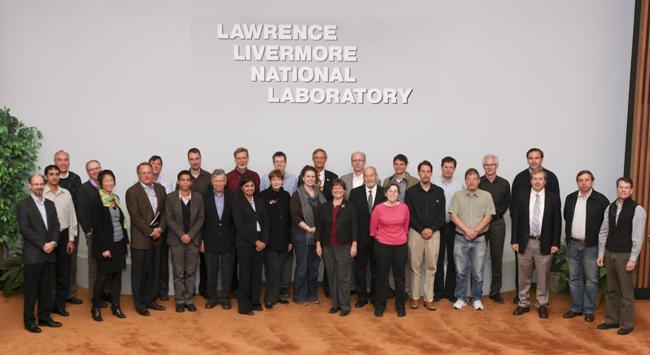 Lab researchers and university scientists at the recent workshop for "Advancing Seismology and Geodynamics through High Performance Computing."

Lab researchers and university scientists gathered recently at a Lab-hosted workshop for "Advancing Seismology and Geodynamics through High Performance Computing."

The workshop's goal was to create a strategy for advancing the state of the art in these fields by partnering the National Science Foundation (NSF) and academia with the high performance computing (HPC) capabilities of the Department of Energy.

Funded mostly by NSF, the November session brought to Livermore many of the nation's academic leaders in computational seismology and geodynamics, including the directors of the Southern California Earthquake Center; NSF Center on Computational Infrastructure for Geodynamics at the University of California, Davis; and the Western Region Earthquake Center, U.S. Geological Survey. According to Steve Bohlen, deputy program director, Energy and Environmental Security, who organized the event, rapid advancement of important Laboratory programs in nuclear explosion monitoring and nuclear reactor seismic safety relies in part on the development of more refined seismic wave propagation codes and whole-Earth models, both of which are also needed by academic researchers to improve researchers' understanding of the Earth's interior.

Discussions during the workshop focused on some of these academic needs. A tour of Livermore's Terascale Simulation Facility showcased the HPC modeling and simulation capabilities that can be shared.

The workshop ended with an outline for a white paper due in January that NSF will use to promote partnerships between academia and DOE. It will present a vision for major advances in seismology and geodynamics that can be enabled with the focused support of an HPC "ecosystem." The white paper will define key attributes and features of that ecosystem and a concept for a more robust partnership between the academic community and the Lab.

The use of HPC for seismology is a hot topic. Coincidentally, on Nov. 19, Bohlen represented the Laboratory at a National Academy of Sciences meeting of the Committee on Seismology and Geodynamics on HPC and computational seismology and geodynamics in Washington, D.C.