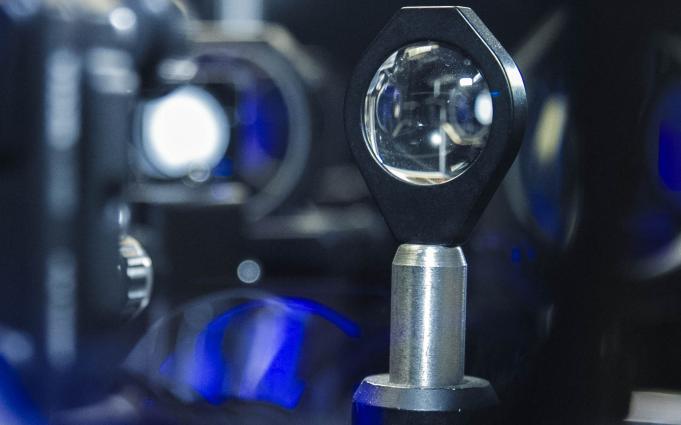 Most of the experiments relevant to this research were conducted on the Janus system at Lawrence Livermore National Laboratory's Jupiter Laser Facility. Janus is a kilojoule-class glass laser system, composed of two beams that are each capable of producing 200-picosecond to 10-nanosecond pulses with energy ranging from 200 joules to about one kilojoule. Photo by Julie Russell/LLNL 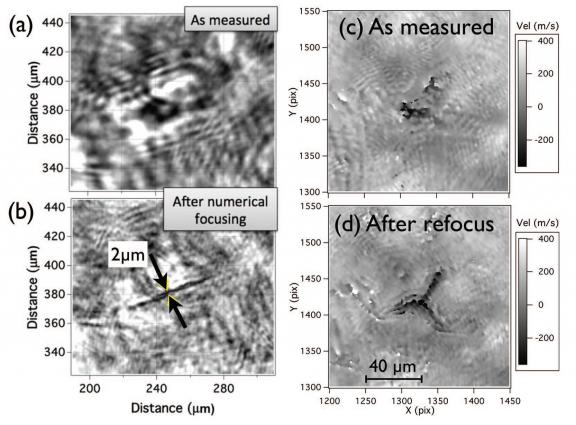 The research team discovered that by using a tool called the velocity interferometer, or VISAR, in 2D, holographic properties became apparent and it was possible to recover some 3D information from the 2D image.

In a recent article published in the Review of Scientific Instruments, a research team led by scientists at Lawrence Livermore National Laboratory describe a technique for 3D-image processing of a high-speed photograph of a target, "freezing" its motion and revealing hidden secrets.

This technique is particularly applicable in targets that are "shocked." Shock physics is the study of matter at high pressures and densities created behind a shock wave. This is a kind of very intense pressure wave, often created by collision between two pieces of matter at high velocity, or by the sudden application of intense energy. In recent years, this intense energy has been delivered by lasers, which create intense pressure pulses on targets of about a millimeter size. Most of the experiments relevant to this paper were done at LLNL's Jupiter Laser facility.

"We measure fast-moving surfaces for a living -- they are shocked by a laser pulse to move very fast," said lead author David Erskine. "We are interested in how they crack and crumble and disintegrate, and also how fast they are moving. This tells us something about the material properties."

The process described uses an apparatus called a velocity interferometer, or VISAR, to measure velocities of targets. VISAR has been in widespread use in national laboratories for many years, but the team used the instrument and processed the resulting images in a novel way. VISAR is traditionally used to measure a target along a line (1D measurement) or at a single point (zero-D measurement). The team instead used VISAR in 2D to make snapshot images, using high-resolution detectors similar to those in found in digital cameras, plus an extremely short laser flash to freeze the target motion.

Because the team used VISAR in 2D, holographic properties became apparent and they realized that it was possible to recover some 3D information from the 2D image.

"We didn't set out to do holography, but when our target accidentally moved, blurring the cracks, we realized we could refocus the data by numerical processing and bring features into focus that were originally blurred," Erskine said. "And it worked. The normally blurred cracks became sharp and focused, like magic."

The ability to better image tiny cracks that are growing and changing, at short timescales, even when the target is moving and often out of focus, could aid in the future study of materials undergoing brittle fracture after shock loading.

"We hope to use this technique to explore how materials such as diamond and silicon fracture and disintegrate when they decompress from high pressure, because these fundamental materials can be obtained in high purity, and diamond is used in many shock experiments at the laboratories," Erskine said. "This process tells us something about the strength of the material under these conditions, and this decompression process is eventually encountered in all momentary shock experiments, yet is poorly understood theoretically."