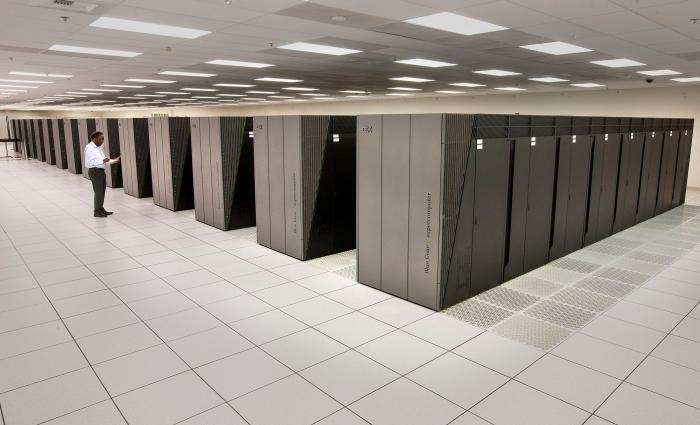 The Sequoia supercomputer played a key role in the Earth mantle convection simulation by a University of Texas-led team that won the 2015 Gordon Bell Prize at this year’s Supercomputing Conference (SC15).

The full power of Lawrence Llivermore’s Sequoia supercomputer played a key role in the Earth mantle convection simulation by a University of Texas-led team that won the 2015 Gordon Bell Prize, announced at this year’s Supercomputing Conference (SC15).

The team’s peak performance results were achieved on the full Sequoia system last summer, and the weak and strong scaling results figured prominently in the team’s presentation at the SC15 conference in Austin, Texas.

LLNL’s onsite IBM analyst Roy Musselman and Livermore Computing’s Scott Futral were acknowledged for their contributions to the project in carrying out the Sequoia calculations, as was the system access granted by DOE/NNSA.

High performance computing (HPC) innovations advancing the state of the art enabled the most accurate simulations yet of mantle convection, the fundamental physical process within Earth’s interior responsible for the thermal and geological evolution of the planet, including plate tectonics.

"LLNL occasionally conducts full-system calculations using a diverse set of codes to better understand the system architecture," notes Mike McCoy, Weapon Simulation and Computing Program director. "This run was exemplary of a calculation that stresses the system, that allows us to better understand its operating parameters and that, as a bonus, demonstrates NNSA’s continued leadership in the area of siting highly functional computers. What we learn about system architecture serves to enhance the capabilities we dedicate to our national security missions."

Sequoia, a 20 petaflops (quadrillion floating point operations per second) IBM Blue Gene/Q system, remains the No. 3 HPC system on the Top500 list of the world’s most powerful computers.

A team led by Amanda Randles, formerly of LLNL and now at Duke University, was among the finalists for this year’s Gordon Bell Prize with a project to model the human circulatory system. Other co-authors of "Massively Parallel Models of the Human Circulatory System" include Erik Draeger, Tomas Oppelstrup and Liam Krauss of LLNL, and John Gunnels of IBM.