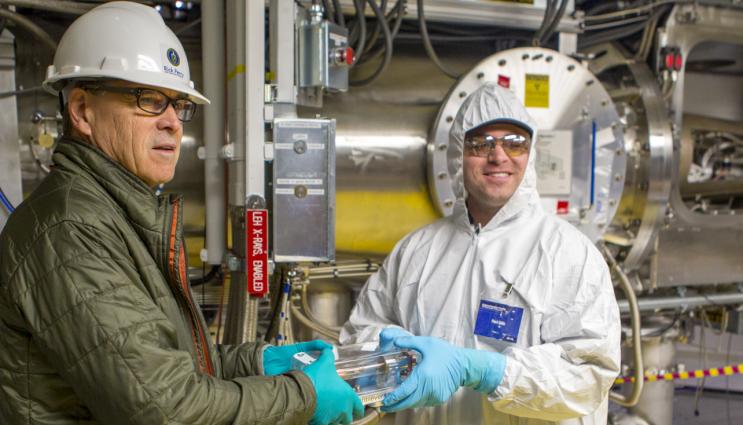 Energy Secretary Rick Perry hands off a target for an experiment at the National Ignition Facility to Paul Gillie during his visit to Lawrence Livermore National Laboratory this week. Photo by Jason Laurea/LLNL

Energy Secretary Rick Perry made his first visit to Lawrence Livermore National Laboratory (LLNL) on Monday, praising Lab employees for "making a difference in people’s lives" and reaffirming DOE’s commitment to securing the future of its national laboratories.

Perry made the remarks during a joint all-hands meeting with the National Nuclear Security Administration’s (NNSA) Livermore Field Office and Sandia National Laboratories, part of a whirlwind West Coast swing that included stops at Lawrence Berkeley National Lab and the Stanford Linear Accelerator Lab (SLAC). Speaking before a packed auditorium, Perry focused much of his talk on LLNL’s supercomputing capabilities, particularly its application to veterans’ health issues such as post-traumatic stress disorder (PTSD) and traumatic brain injury (TBI). 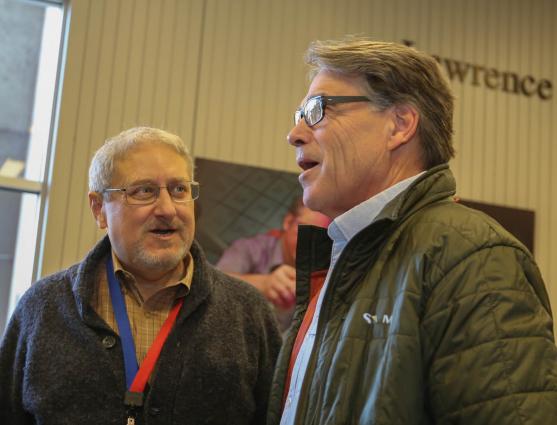 "What you’re doing in a lot of different areas has the potential to change the world," Perry said. "The computational capacity, what you have the potential to do, is nothing less than world-changing. This Lab is going to be part of a story, it may not be 10 years from now -- it may be sooner than that, of how people’s lives really get affected in a positive way."

Perry, a U.S. Air Force veteran and longest-serving governor in Texas history, has made veterans’ issues a top priority in his first year at the helm of DOE. During his Livermore Lab visit, he lunched with veterans from LLNL, Lawrence Berkeley, Sandia and SLAC, and was briefed about LLNL efforts to use high-performance computing to address veteran-related challenges. Researchers, including collaborators from the University of California, San Francisco (UCSF), presented Perry with information on collaborations with the National Cancer Institute (NCI), including the Accelerating Therapeutics for Opportunities in Medicine (ATOM) consortium for speedier cancer drug discovery, as well as precision medicine and national security.

At the Livermore Computing Center, where Perry toured and autographed the Lab’s next-generation supercomputing system Sierra, scientists unveiled a brand-new collaborative partnership aimed at leveraging DOE’s expertise in artificial intelligence and high performance computing to bring precision medicine to patients suffering from TBI. The project utilizes the expertise and resources at multiple national labs, including Lawrence Livermore, Argonne and Lawrence Berkeley. The laboratories are working closely with UCSF, who is leading the TRACK-TBI (Transforming Research and Clinical Knowledge in Traumatic Brain Injury) project, one of the largest national consortiums for the most detailed clinical study of TBI. 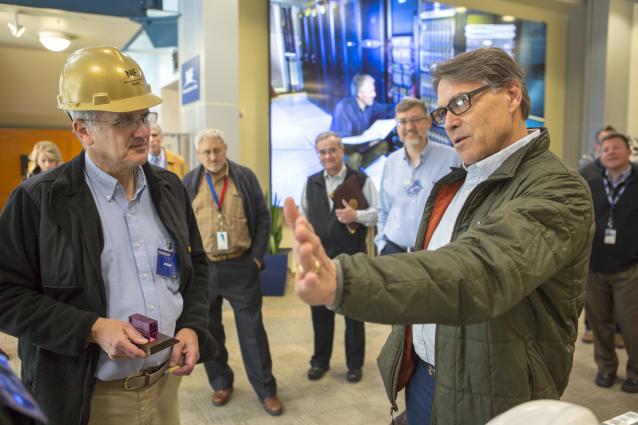 Developing a simulation in just three weeks, this multi-institution team showcased for Perry DOE's high performance computing capabilities and the tremendous increases in speed achievable in computing functional connectivity of the human brain, starting from specialized Magnetic Resource Imaging (MRI) data. With this time reduction, researchers told Perry it’s now possible to envision the use of these imaging modalities in making clinical decisions for individual patients. The DOE-UCSF team is continuing to work on this neural map, along with other human data, to drive precision medicine and personalized risk assessment for TBI as well as follow-on complications such as depression or PTSD.

"I’ve never seen a project move as quickly as this one," Perry said, adding that the results were "stunning."

During his casual, conversational and often candid all-hands talk at the completion of his tour, Perry conceded he didn’t completely "know the depth" of what DOE did until took over the helm as secretary but has grown to appreciate the agency’s national laboratories for their ingenuity, innovation and potential.

"I’ve come to understand what they do and have found this great new passion in my life to be a supporter, a cheerleader, a proponent of these national jewels," Perry said. "You are all fortunate to get to work at a facility like this."

Perry spoke of the recently completed Nuclear Posture Review and the "important work" LLNL has done to help modernize the nuclear program, protect the electrical grid from cyberattacks and impact health, including PTSD, TBI and predicting the spread of disease. He expressed his intention to be a "powerful champion" for the laboratories, as the U.S. moves into a "transition for stockpile stewardship" and a new era of exascale computing.

"Our commitment at headquarters to these labs is total and particularly on the computing side," Perry said. "We understand that is probably the most important race we’re involved in because no matter where you’re at in this enterprise, the ability to have that computing capability will be ever more important in the future."

Attendees to Perry’s talk included Livermore Mayor John Marchand and longtime LLNL scientist Wigbert Siekhaus. Perry took a moment during his presentation to honor Siekhaus, who played a significant role in developing a model of a major component in the nuclear detonation system. Perry presented Siekhaus with a special award for his 55 years of service, calling him a "patriot, a public servant and a great all-around American."

A question-and-answer session with LLNL Lab Director Bill Goldstein and Sandia-California Lab Director Stephen Younger followed, where Perry acknowledged "ongoing infrastructure concerns" at the laboratories and pledged that he would do all he could to advocate for "the next 50 years of funding."

"This administration is sending a message with its budget, and what it speaks to relative to infrastructure is a step in the right direction," Perry said.

"Somehow, we took our eye off the ball, but guess what? The world still has some bad people in it, and one of America’s jobs is to make sure we keep our people safe, and that nuclear deterrent is one of the most powerful ways we have to do that."

Perry concluded by stressing the importance of attracting and retaining the best and brightest employees, particularly in engineering, even floating the idea of subsidizing mid-level engineers and other potential workers to attract talent in a highly competitive job market like the Bay Area.

"We need to value publicly our community colleges and the young men and women that they develop," Perry said. "How do we make nuclear cool again and impress on these kids how cool it would be to work at a national lab? I think we need to up our game. We need to tell our story about what’s going on…We’re literally saving people’s lives."

DOE
Photos of visit to LLNL

Institute turns over a new LEAF in energy security 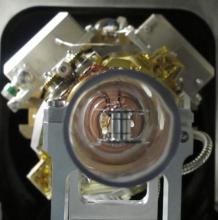