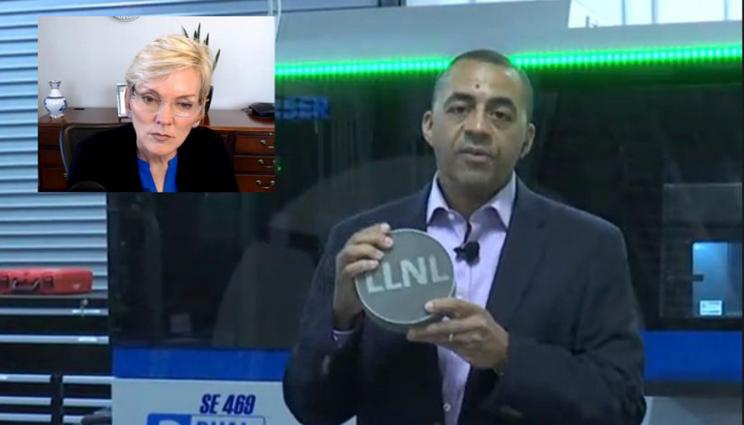 Granholm, the nation’s 16th Secretary of Energy and only the second woman to lead the Department of Energy (DOE), is conducting similar visits to other national labs. This visit marked her fourth stop on the series of virtual tours.

After an introduction by LLNL Director Kim Budil and Livermore Field Office Manager Pete Rodrick, Granholm started her two-hour visit with an all-hands meeting for employees.

“It’s really impressive to see the full range of work that goes on,” Granholm said. “The role the Livermore Lab has always played is keeping our nation safe. But it’s so amazing to be home of the largest and highest energy laser – that is very cool.”

To foster diversity, equity and inclusion, Granholm said the administration supports every employee and all the work conducted at the Lab.

“This administration deeply values you and your work, and the national labs are the crown jewels of this agency,” she said. “We are making the big commitments and the big statements of support because we believe the U.S. and the world are safer because of the work that you do.”

She said the president wants this administration to make big progress on tackling our nation’s toughest challenges – from climate change to cybersecurity.

“To solve these problems, we have to base our decision-making on the best available science, and I consider DOE to be America’s ‘Solutions Department,’ with the national labs being the ‘solution factories’,” Granholm said.

She addressed Lab questions about the cyber vulnerability of our energy infrastructure, the importance of STEM outreach and bridging the gap between government and business.

“My hair is on fire for some of these solutions,” Granholm said. “Your work literally inspires me to get out of bed in the morning because I know you are creating a better tomorrow for us all.”

Engineering Associate Director Anup Singh virtually welcomed Granholm to the Advanced Manufacturing Laboratory, located in the Livermore Valley Open Campus – an area outside the fence of LLNL, in order to foster business relationships with universities and industry.

“This facility is for joint development projects,” said Chris Spadaccini, Materials Engineering division leader. “We call it the spin in and spin out lab. We spin out some of the best things we are doing and spin in the best ideas from the outside community. We are a great example of how the DOE is keeping the country at the forefront of advanced manufacturing.”

Erica Fong and Maxim Shusteff, staff engineers in the Materials Engineering Division, described the volumetric 3D printing process, a new approach that produces the entire 3D geometry of an object at the same time, in a single step.

To conclude, Sarah Baker, group leader for Materials for Energy & Climate Security, and Cameron Cornell, staff engineer in the Materials Engineering Division, showcased a metal binder jet printer used to make components for carbon management and described the projects the tool is used for.

After hearing about the Lab’s wide variety of advanced manufacturing capabilities, Granholm said: “We have come so far from the 3D printing of say, 10 years ago. It’s amazing. Volumetric 3D printing – that is mind-blowing.”

Next up: Research team presentations

LLNL climate scientist Mark Zelinka described the work that the Lab conducts in climate modeling including local scale simulations of current and future climate. “The models are getting more and more realistic when they are going to the regional scale and it is really where the rubber hits the road.”

Granholm was particularly interested in the presentation by Sarah Baker, group leader of Materials for Energy & Climate Security, about carbon neutrality and the LLNL report “Getting to Neutral: Options for Negative Carbon Emissions in California.”

“We can get to neutral by using negative emissions technologies that are available today,” Baker said. “No miracles are required but we need to do it rapidly. The technology and land use practices for California will be applicable for the rest of the country.”

Roger Aines, chief scientist for the Energy & Homeland Security, described the public-private partnerships that have developed in the carbon capture and storage field.

“You’re talking my language because we want to generate jobs from this Energy 2.0 effort,” Granholm said. “I love it – and thanks for linking it to the economy.”

“Our computing is the most capable in the entire DOE complex,” he said. “It's been a core capability since the Lab was born.”

Chris Clouse, program director for Weapon Simulation & Computing, discussed the use of HPC in sustaining and modernizing the stockpile as well as LLNL’s role in advanced platform development including El Capitan, the first exascale computer for national security applications. Jim Brase, deputy associate director for programs, described how computing is being used to transform biology, including supporting the response to the COVID-19 pandemic, advancing our understanding of biological systems and dramatically speeding up development of therapeutics and vaccines.

“These kinds of partnerships linking Lab capabilities with industry and university thought leaders is allowing us to have maximum economic impact,” Brase said.

National Ignition Facility & Photon Science Principal Associate Director Jeff Wisoff gave a quick overview of the National Ignition Facility (NIF). “We create the conditions only produced by nuclear weapons and in the core of stars and planets,” he said. “LLNL scientists do one-of-a-kind experiments without the need for underground testing. NIF works as a deterrent for adversaries. But we also leverage NIF to do other national security missions.”

Mark Hermann, deputy program director for Fundamental Weapons Physics, outlined how NIF is used to ensure the safety, security and resilience of the nuclear stockpile without underground testing. “It’s not only the coolest place to work in the DOE but it’s also the hottest,” he said, describing the temperatures and pressures necessary to simulate a nuclear explosion.

Tammy Ma, program element leader for High-Intensity Laser High Energy Density Science, recalled her path from her introduction to the most energetic laser in the world as a student to one day working at LLNL and conducting experiments. “The NIF is, without a doubt, a wonder of science and engineering,” she said. “We are laying the groundwork for realizing the dream that began 60 years ago — clean, limitless fusion energy.”

In closing, Budil thanked Granholm for her virtual briefing and tours and said she was looking forward to the day when she can visit in person.

“Thank you so much for this window into your lives and your work,” Granholm said in her goodbye.