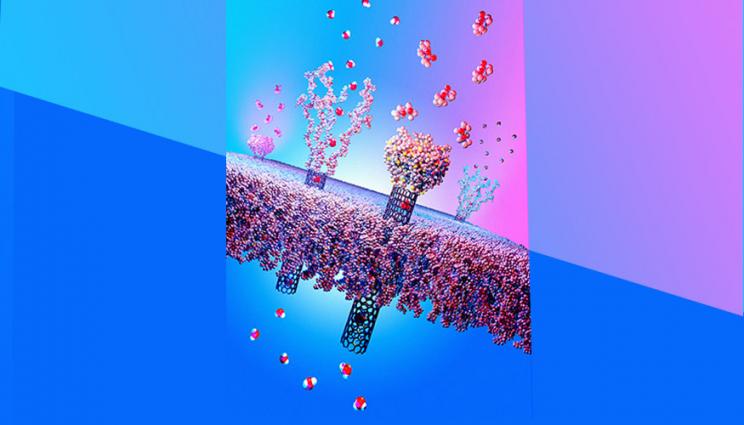 Recent events such as the COVID-19 pandemic and the use of chemical weapons in the Syria conflict have provided a stark reminder of the plethora of chemical and biological threats that soldiers, medical personnel and first responders face during routine and emergency operations.

Personnel safety relies on protective equipment which, unfortunately, still leaves much to be desired. For example, high breathability (i.e., the transfer of water vapor from the wearer’s body to the outside world) is critical in protective military uniforms to prevent heat-stress and exhaustion when soldiers are engaged in missions in contaminated environments. The same materials (adsorbents or barrier layers) that provide protection in current garments also detrimentally inhibit breathability.

To tackle these challenges, a multi-institutional team of researchers led by Lawrence Livermore National Laboratory (LLNL) scientist Francesco Fornasiero has developed a smart, breathable fabric designed to protect the wearer against biological and chemical warfare agents. Material of this type could be used in clinical and medical settings as well. The work was recently published online in Advanced Functional Materials and represents the successful completion of Phase I of the project, which is funded by the Defense Threat Reduction Agency through the Dynamic Multifunctional Materials for a Second Skin "D[MS]2" program.

"We demonstrated a smart material that is both breathable and protective by successfully combining two key elements: a base membrane layer comprising trillions of aligned carbon nanotube pores and a threat-responsive polymer layer grafted onto the membrane surface," Fornasiero said.

These carbon nanotubes (graphitic cylinders with diameters more than 5,000 times smaller than a human hair) could easily transport water molecules through their interiors while also blocking all biological threats, which cannot fit through the tiny pores. This key finding was previously published in Advanced Materials.

The team has shown that the moisture vapor transport rate through carbon nanotubes increases with decreasing tube diameter and, for the smallest pore sizes considered in the study, is so fast that it approaches what one would measure in the bulk gas phase. This trend is surprising and implies that single‐walled carbon nanotubes (SWCNTs) as moisture conductive pores overcome a limiting breathability/protection trade-off displayed by conventional porous materials, according to Fornasiero. Thus, size-sieving selectivity and water-vapor permeability can be simultaneously enhanced by decreasing SWCNT diameters.

Contrary to biological agents, chemical threats are smaller and can fit through the nanotube pores. To add protection against chemical hazards, a layer of polymer chains is grown on the material surface, which reversibly collapses in contact with the threat, thus temporarily blocking the pores.

"This dynamic layer allows the material to be ‘smart’ in that it provides protection only when and where it is needed," said Timothy Swager, a collaborator at the Massachusetts Institute of Technology who developed the responsive polymer. These polymers were designed to transition from an extended to a collapsed state in contact with organophosphate threats, such as sarin. "We confirmed that both simulants and live agents trigger the desired volume change," Swager added.

The team showed that the responsive membranes have enough breathability in their open-pore state to meet the sponsor requirements. In the closed state, the threat permeation through the material is dramatically reduced by two orders of magnitude. The demonstrated breathability and smart protection properties of this material are expected to translate in a significantly improved thermal comfort for the user and enable to greatly extend the wear time of protective gears, whether in a hospital or battlefield.

"The safety of warfighters, medical personnel and first responders during prolonged operations in hazardous environments relies on personal protective equipment that not only protects but also can breathe," said Kendra McCoy, the DTRA program manager overseeing the project. "DTRA Second Skin program is designed to address this need by supporting the development of new materials that adapt autonomously to the environment and maximize both comfort and protection for many hours."

In the next phase of the project, the team will aim to incorporate on-demand protection against additional chemical threats and make the material stretchable for a better body fit, thus more closely mimicking the human skin.