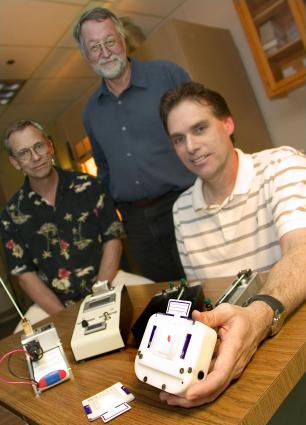 Among the key developers of the ELITE explosive screening technology are (left to right): Del Eckels, John Reynolds and Peter Nunes, all of the Lab's Forensic Science Center. They are shown with some of the early ELITE prototypes and the current card version, which is resting in front on the table. to download a high-resolution image.) 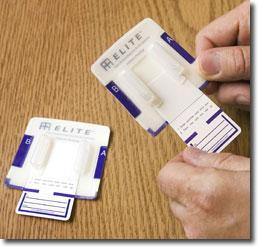 The LLNL-developed ELITE explosives detector is designed for one-time use and can be disposed of as regular (non-hazardous) waste. Several of the devices can fit easily into a shirt pocket and can be used, for example, on vehicle door handles during routine traffic stops, on surfaces and door handles of suspicious parked vehicles, or on suspicious packages. The sample is tabbed for ease of handling and to allow recording of date, time, and sample location information.

LIVERMORE, Calif. — Airport screeners, law enforcement and military personnel and others have a new ally in the war against terrorism – a portable, sensitive and accurate explosives detector developed by Lawrence Livermore National Laboratory researchers.

The new explosives detector, called the Easy Livermore Inspection Test for Explosives, or ELITE, is highly sensitive to more than 30 different explosives, making it one of the most effective explosive detection systems available, said John Reynolds, who led the technology’s development and is the deputy director of LLNL’s Forensic Science Center.

"Our goal is to develop new technology or take existing technology, make it better, and then adapt it for use in the field," Reynolds said.

Using the ELITE card, airport screeners, border patrol agents, security agents, first responders, police and military personnel and others can secure real-time analysis – within the space of one to four minutes – whether explosives are present, according to Reynolds.

The ELITE card was honored last night with a Federal Laboratory Consortium (FLC) award for excellence in technology transfer, presented to LLNL researchers during an awards dinner at the Minneapolis Marriott City Center.

The technology has been licensed to Field Forensics Inc., a St. Petersburg, Fla., company, and went on the market last October.

Already, the firm has picked up a host of customers, including the U.S. Army, the Royal Canadian Mounted Police, the Ontario Provincial Police, the Canada Air Marshals, the Queensland Police from Australia and others, said Field Forensics President Craig Johnson.

"When it was announced that the ELITE explosives detection technology was going to be made available for licensing, we jumped at the opportunity," Johnson said. "ELITE technology is exactly that which our customers have been telling us they need: it’s self-contained, small, light, disposable, easy to operate and inexpensive."

Reynolds echoes Johnson’s points about the ELITE card’s advantages, noting the technology is light (weighing a fraction of an ounce), small (the size of a 2-inch by 3-inch index card), inexpensive (costing less than $25, substantially less in higher quantities) and stable (with a shelf life of about two years).

"It gives you a chance to detect explosives faster, cheaper and easier," Reynolds said. "That allows more law enforcement, military, airport security and others to have a better chance to catch the bad guys."

In Reynolds’ view, the ELITE card could provide an important assist to the U.S. military in Iraq and on other fronts.  "In Iraq, it could be used for finding bomb-makers, vehicles used to transport explosives or to find anyone in the chain of making improvised explosive devices.

"With great demand for travel in the industrial world, there is an increasing need for safe transportation within the United States and overseas," Reynolds said. "Significant issues involving explosives detection are cost, sensitivity and convenience. The ELITE detection alleviates all these concerns by providing a fast, reliable and convenient system that is easy to use."

To use the ELITE detection card, the suspect surface – whether hands, a vehicle or luggage – is wiped with a swipe. The swipe is replaced into the card and a small glass vial, or ampoule, is broken. If TNT-based explosive materials are present, the swipe will change color to indicate a positive reading. If the swab remains colorless and explosives are still suspected of being present, a second ampoule is broken, again looking for a color change that would indicate the presence of other types of explosives.

Development of the ELITE technology was achieved by a team of scientists from the Lab’s Forensic Science Center, in partnership with LLNL’s Energetic Materials Center, under research grants sponsored by the Department of Energy and the National Nuclear Security Administration. The work started in October 2003 and cost about $1.5 million.

The Federal Laboratory Consortium for Technology Transfer (FLC) is a nationwide network of federal laboratories that provides the forum to develop strategies and opportunities for linking the laboratory mission technologies and expertise with the marketplace.

Organized in 1974 and formally chartered by the Federal Technology Transfer Act of 1986, the FLC consists of more than 700 major federal laboratories and centers and their parent departments and agencies.